Since 2009, we have played a fundamental role in returning beavers to Scotland.

From releasing the first wild beaver in 2009, to completing a reinforcement project in 2020, our work has led to this keystone species becoming a legally-protected native species once again.

Eurasian beavers are a native species to the UK, but they were hunted to extinction in the 16th Century. They are one of the world’s most adept natural engineers, with an incredible ability to create new wetlands, restore native woodland and improve conditions for a wide range of species including dragonflies, otters and fish.

The return of beavers also provides ample wildlife tourism opportunity. Knapdale’s beavers have attracted visitors from around the world, bringing social and economic benefits to the area.

About the Scottish Beaver Trial

In May 2009, the Trust, in partnership with the Royal Zoological Society of Scotland (RZSS) and Forestry and Land Scotland, released the first wild beavers in Scotland in over 400 years. The Scottish Beaver Trial was one of the largest field trials of its kind in Europe and aimed to help the Scottish Government make an informed decision on the future of the species in Scotland.

An independent scientific monitoring programme was carried out by NatureScot to assess the effect that the trial population had on the local environment and how well they settled in Scotland. This evidence contributed to a comprehensive report, Beavers in Scotland, which was published and presented to the Scottish Government in 2015.

About the Scottish Beavers Reinforcement Project

In 2017, the Trust joined forces with RZSS once more to reinforce Knapdale’s beaver population. Over the course of three years, a further 21 beavers were released into the area under licence from NatureScot. This not only boosted the number of beavers in the area, but also considerably increased the genetic diversity.

The final report for this project, Beavers in Knapdale, was published in January 2021. 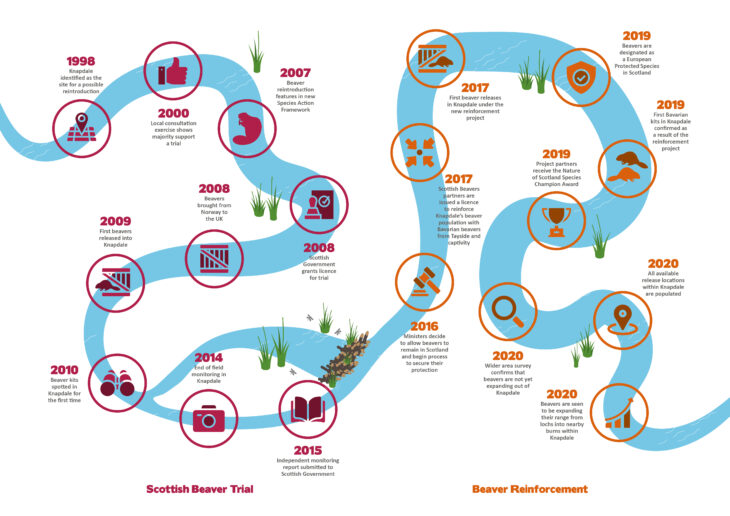 Click on the image above to see a timeline of key milestones in the reintroduction and reinforcement of beavers in Knapdale.

Adopt a beaver today to show your support for the return of these incredible animals to Scotland.

Beavers: Back after 400 years

50 for the Future – Bring back beavers