With our Osprey season over for another year we thought we’d reflect on the season and do some comparisons between this year and last year.

The season kicked off with excitement, the male was back and there was a new, young female on the nest getting very cosy. Would our female return for her 23rd year? Oh yes and saw off the new female in no time. Then the eagerly anticipated eggs appear, with the fourth one taking us by surprise. The nail biting wait for them to hatch, only one this year but a strong, fiesty female  showed more and more of her mother’s character as time went on, not afraid to have a go at dad or mum. The early fledging at just seven weeks and from then the increasing confidence and strength the try different flying techniques and fly further and further afield, far more than her laid back brother Blue 44 did last year. The male continued to bring in the fish doing his best during the very dry weather and during high winds, although neither female appreciated the eels he brought them. The fantastic dog fights with intruder Ospreys and the unforgettable two pronged attack on the Heron. The female being blown head over talons when she was on the nest. All great moments.

And then it was time to say goodbye, first to our female, then our feisty chick Blue YZ and finally the male.

Our male beat last year’s total fish catch by 11 fish but the make up of the catch was very different. Only Blue Trout stayed the same with a huge increase in Salmon, the second Eel making it a 100% increase on last year and a much bigger amount of Mystery Fish as we struggled to work out what it was from the mangled remains or they got eaten so quickly. Interestingly there was alot less Pike, Rainbow Trout and Perch, this may have been in part to Butterstone Loch fishery, a favourite fishing spot, being closed for half the season. But as far as fish go the outstanding moment this year had to be the ‘Three for One’ Fish when the male brought a Pike in which had not one but two whole smaller fish inside which were promptly pulled out and eaten. 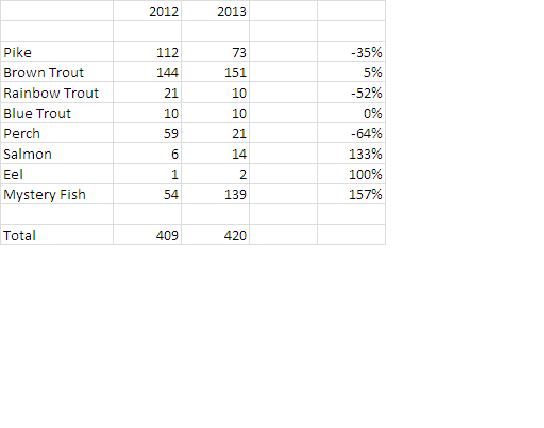 With our Osprey season over for another year we thought we’d reflect on the season and do some comparisons between this year and last year. The season kicked off with …