Yesterday morning (25th May), we had a very special ringed intruder land on the nest. Blue/White AE, also named ‘Rothiemurchus’, is a celebrity in the osprey world. He hatched at a nest site on the Rothiemurchus Estate near Aviemore in 2009. That summer he was ringed and fitted with a satellite tag by world-renowned osprey conservationist Roy Dennis, to provide insight into osprey migration patterns.

His satellite tag tracked his migrations for 5 years, from 2009 to 2014, providing data on his migratory routes, which you can explore here. Ospreys migrate alone and until satellite tags came into use, little was known about how they reached their wintering grounds in west Africa.

On his first migration in 2009, he veered away from the coast when crossing the Bay of Biscay, failing to hit land again in north Spain. Luckily, he managed to rest on a boat or floating object at sea, and by the next morning he had rerouted, turning back in towards Portugal and following the coast all the way down to Senegal where he has spent his winters since. 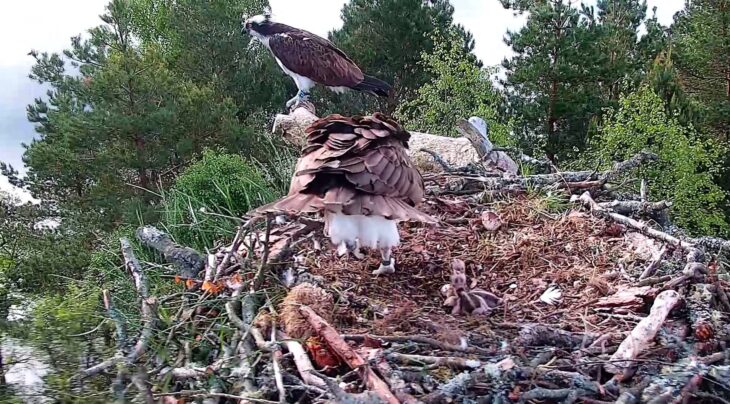 It still remains unclear how ospreys and other migratory species forge their routes. As lone migrators, ospreys are driven by instinct, and some scientists theorise that they use a process called ‘vector summation’, whereby they orient themselves using an inherited series of flight steps and direction changes (vectors) (Source: RSPB Spotlight: Ospreys, by Tim Mackrill). They may be taken off course from this by the wind and other environmental factors, which is why many young ospreys do not survive their first migration, as has been the case with many satellite tagged ospreys. 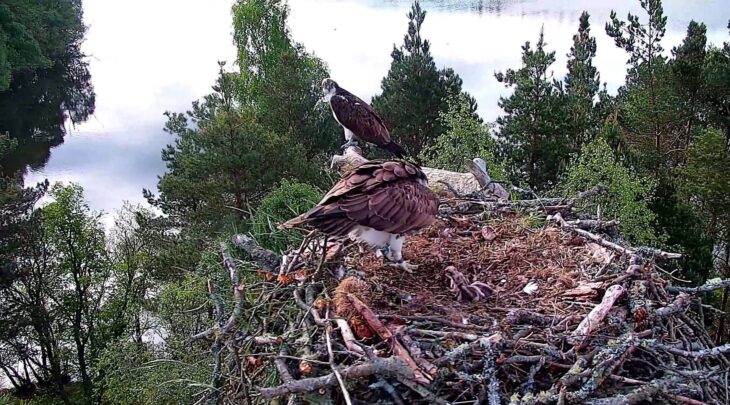 In 2014, the Roy Dennis Wildlife Foundation stopped receiving signals from Rothiemurchus’s satellite tracker. However, they suspected this to be due to a technical issue rather than the osprey’s death, and right enough he was spotted in Senegal in winter 2014.

His last sighting was in December 2017 in Senegal, so we are very excited that he landed on our nest at Loch of the Lowes this week, although our female NC0 was less amused by his presence! Although his satellite tag has since fallen off, it was suspected that he may be breeding in Perthshire due to historical GPS signals received from his tag, and our sighting this week likely confirms this piece of his movements and biography! 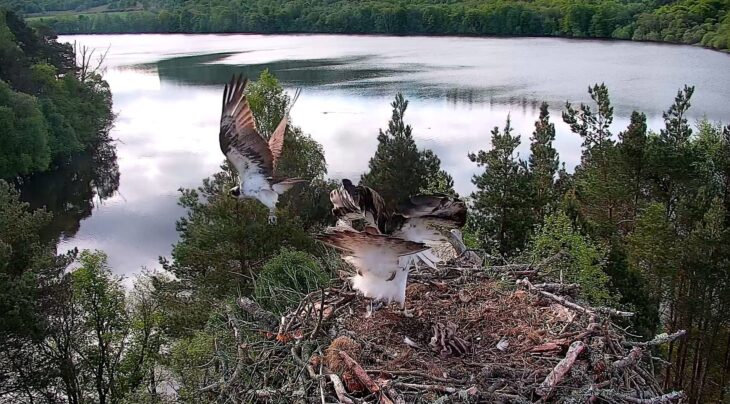 Keep up to date with our resident ospreys, LM12 and NC0, and their chicks by watching the webcam here. Follow us on Twitter or Facebook for regular updates.

Yesterday morning (25th May), we had a very special ringed intruder land on the nest. Blue/White AE, also named ‘Rothiemurchus’, is a celebrity in the osprey world. He hatched at …