We’re calling for action to make sure the Scottish Ministers know how valuable our protected areas are to us, to wildlife, and to local livelihoods.

The Scottish Wildlife Trust has been working closely with our partners in the Coul Links Conservation Coalition at the Public Inquiry (which you can watch here). The Coalition has just submitted its closing remarks. Over the four weeks, we heard from a range of specialist witnesses, including our own, on the importance of the site for wildlife and people.

Jonny Hughes, then-CEO of the Trust and former warden of Coul Links when the Trust managed the area, gave oral evidence on the international importance and ecological significance of the site.

“Protecting Coul Links against development is an important demonstration that Scotland takes these responsibilities seriously, and that it’s prepared to lead where it expects others to follow”. Jonny Hughes

As Mr Hughes highlighted, “We are in the middle of a global biodiversity crisis. In the UK 56% of species have declined since 197028 driven mostly by human activities. We therefore have a global responsibility, collectively and severally, to reduce the pressures that humans place on the natural environment and to recover biodiversity.”

Following Mr Hughes’ evidence, Dr Mark Young, a retired Zoology lecturer from Aberdeen University, ex-trustee of Butterfly Conservation and author of over 200 research papers, drew on his his wealth of experience in moths and butterflies. Insects face a global crisis that imperils our ecosystems, and a recent global report shows the UK is at the forefront of this crisis, a result of land-use change and excessive pesticide use. A new golf course in a triple-protected would increase both these pressures.

Dr Mark Young is a widely known and regarded specialist in the lepidoptera (moths and butterflies) of Scotland and the UK. His evidence highlights a lack of recognition of the large number of species present on the site, including Red Data Book species (those regarded as most at risk). As Dr Young informs us, Lepidoptera are incredibly specialised – they’re highly adapted to very specific conditions. Witness testimony in favour of the golf course failed to acknowledge this degree of specialisation. His work has revealed that “of the 246 species, 66 are notable, including two Red Data Book listed species, 43 are listed as Nationally or Locally Scarce, and 26 are on the Scottish Biodiversity List (species that Scottish Ministers consider to be of principal importance for biodiversity conservation in Scotland)”.

In oral evidence, Dr Young highlighted that habitat fragmentation could pose a serious problem to the lepidoptera of the area, “The majority of lepidoptera and other invertebrates do not choose to cross barriers – they will reach the edge of the habitat and fly back.” Dr Young concludes that “the Lepidoptera associated with the habitats included in the Ramsar site listing help define the international importance of Coul Links.”

From Buglife, Craig Macadam’s evidence clarified the importance of insects: “Invertebrates are essential to the maintenance of healthy ecosystem functioning. They provide vital services including waste recycling and pollination, and form the basis of most food chains.”

Mr Macadam continued to point out that “No mitigation has been offered for the impacts on the nationally important invertebrate assemblage at Coul Links, and mitigation offered for the impacts on Fonseca’s seed fly is both inadequate and inappropriate”. Fonseca’s seed fly is a globally listed species found only in East Sutherland, and whose behaviours remain largely unknown.

Beyond invertebrates, Dr Lucy Wright from the RSPB detailed the threats posed to bird populations in the area. As she clarifies, “The evidence presented by the Applicant fails to demonstrate that the Proposed Development would not adversely affect the integrity of the Ramsar site and SPA and their species, nor that the Proposed Development is not likely to damage the SSSI and its species.

“The Application site holds an important and diverse range of habitat types, each contributing to make the internationally important site so valuable overall. In my view the Proposed Development would significantly diminish Coul Links and the designated sites of which it is part.” 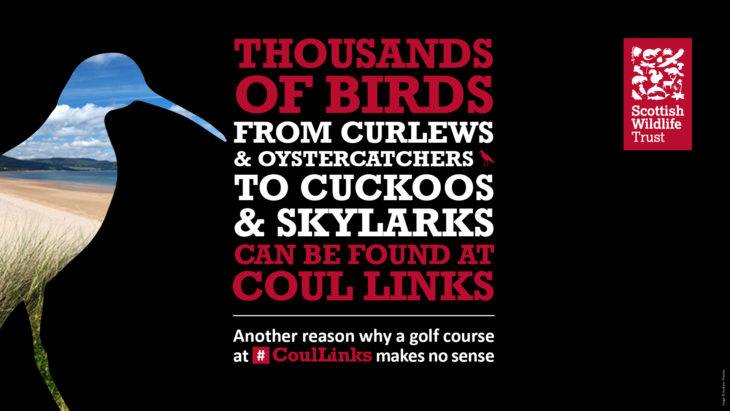 It’s not just wildlife who lose out

Also opposing the unsustainable development, the local grouping Not Coul raised important issues of wildlife conservation and convincingly challenged the myth of job creation. While similar promises have been made under very similar circumstances, as in the in the construction of the Trump golf course in Aberdeenshire, these promises remain undelivered. There are already six golf courses within ten miles of Coul Links.

“Coul is one of the few truly special places in Scotland, where unexpected encounters with the wild are not only possible, they are likely.” Local resident speaking to Ramblers Scotland

The second phase of the Public Inquiry heard evidence relating to social and economics aspects of the application. Campaigning for the rights of access, ScotWays, working with Ramblers Scotland, highlighted the importance of the area for local walkers and visitors to the area. In particular, the recently-routed John O’Groats Trail, especially Stage 5 between Dornoch and Golspie, hugs the wild dune system south of the Loch Fleet basin – Coul Links.

In the Highlands, 87% of tourists said the most important motivation for visiting was the scenery and landscape. Sustainable tourism is essential for many of Scotland’s communities. The Scotland Visitor Survey shows that, across Scotland, the most important reason given for visiting Scotland, by a significant margin, was its scenery and landscape (50%), and second to this was its history and culture (33%). Coul Links is one of the most protected sites in the country, we cannot afford for the Highlands to lose its international reputation for natural heritage.

The final decision will rest with the Scottish Ministers, and the inquiry’s findings these will be delivered to them in due course – though there is no set timeline for this. However, the Ministers are under no obligation to rule in line with the Inquiry’s findings, nor are they obliged to share these findings.

As such, it is the Scottish Ministers who have the power to enforce these protections, to show that protected areas are just that: protected, not bargained and threatened.

But you can help too. Already, tens of thousands of you have helped campaign and contribute towards the legal costs of protecting Coul Links. Now, we ask that you write to your local MSP, and we’ve set up an easy online portal for doing just that. This will generate an email automatically to your local representatives, and we encourage you to change any of the content to personalise the message. If you’re outside Scotland, the email will be sent to the First Minister of Scotland.

We need as many people as possible to contact their representatives and show the breadth of support for our protected areas.

Stay up to date with the Coul Links campaign here, and at #SaveCoulLinks

We’re calling for action to make sure the Scottish Ministers know how valuable our protected areas are to us, to wildlife, and to local livelihoods. The Scottish Wildlife Trust …