While we’ve often mentioned many of the birds you can see at low tide, the basin is also a great spot to see wildlife at high tide. The many eider ducklings we’ve seen over recent weeks are getting bigger and bigger now, and some growing from almost featureless black balls of fluff to brown juveniles.

The lapwings are returning to the basin, having spent the last few months in the fields nearby the basin for the breeding season. Additionally, we saw some really great views of Goosander right in front of the visitor centre this week, as they chased for fish in their distinctive manner.

At last, the stoats have been more adventurous! We’ve known that there have been stoats nearby for a while, but in the last week at least 3 youngsters have been spotted play-fighting around the dipping pond. Hopefully there’ll be even more to see soon, as stoats tend to have litters of roughly 6 to 12 kits.

Over the last few days we’ve also begun to see some flocks of juvenile Starling come into the salt pans just in front of the basin, with one of our volunteers counting a flock of 47. Also increasing is the number of common tern, with counts seemingly doubling to numbers of 70 – 80 on the raft. This will only rise further when we begin to see their young emerge.

The swallow chicks that have been nesting under the eaves since April have just started to fledge, too. 2 chicks were seen, and there are at least 3 more nests so you can expect to see more over the coming weeks! Finally, we’re very hopeful to see sand martins fledging soon. They were late to arrive this year, but we’ve been seeing more and more activity near the wall recently.

The perfect opportunity to see all this is our Journey to the Centre of the Mud event this Saturday! This takes advantage of the lowest tide of the year to provide an unusual opportunity to see the wildlife of the basin from a different angle.

Our Wild about the Basin events kick off next Wednesday, and continue every Wednesday through the 5th of August at 10:30 – 12:00. Each week has a theme as we discover the wildlife near the basin, and you can find out this week’s theme over on the Facebook page in the next few days. 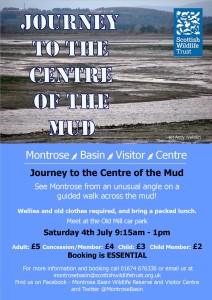 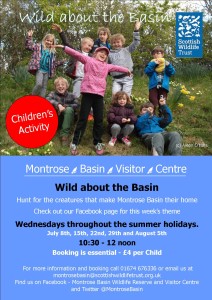 While we’ve often mentioned many of the birds you can see at low tide, the basin is also a great spot to see wildlife at high tide. The many eider …