As a new member of staff this season, I have been tasked with keeping an eye on this year’s fish deliveries.  Through this important task I have learned how to rapidly identify a fish during one of the changeovers and improved my knowledge of Osprey fishing behaviour.

Usually our male is the sole provider of food to the nest. Generally (but not always) our male eats the head of the fish somewhere else, then delivers the half eaten fish to the nest for the female.  This changeover takes no more than a few minutes and the female then flies off to feast on her fish on a perch somewhere.

While this typical Osprey behaviour has been observed this season, the staff and volunteers have also been speculating as to whether our famous female has also been fishing for herself.  We have all observed our male being left on the nest to incubate the eggs for long periods of time.  In April he was incubating for an average of 2 hours at a time, which would give our female ample time to go and catch a fish.

To further illustrate this observed change in behaviour, here is the fish delivery data from March (arrival) to May (pre-hatching) last year for comparison.  Over the same period of time, there have been 21 fewer fish delivered to the nest by the male this year compared to 2013.

It will be very interesting to be able to compare the final fish totals in September with the previous years.   As you may already know, there’s no longer any chance of getting a chick from our nest this year.  A single chick was raised in both 2012 and 2013, but with no chicks this year there will definitely be fewer deliveries to the nest. Bearing in mind that our female is also feeding herself, it will be fascinating to see just how much the totals will differ. 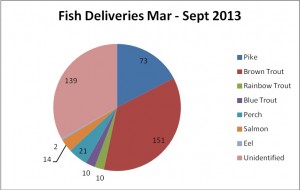 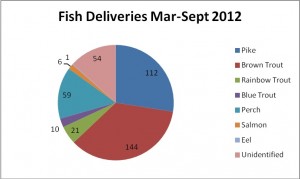 By Emma Castle- Smith, VC assistant: As a new member of staff this season, I have been tasked with keeping an eye on this year’s fish deliveries.  Through this important …