Our young osprey Blue YD is still on the coast of Senegal  as of yesterday, presumably enjoying fishing the warm lagoons behind the tropical beach! Since heading to the coast last week,  from his favourite wintering territory on the inland Senegal river, he has been ranging over a 40mile stretch of coast south  of St Louis.

He has mostly been fishing in the river estuaries and warm lagoons behind the sand spit of   National Park de La Langue de Barbarie. He has roamed up to 3miles inland too, over inhospitable territory with huge sand dunes and very sparse tree cover. 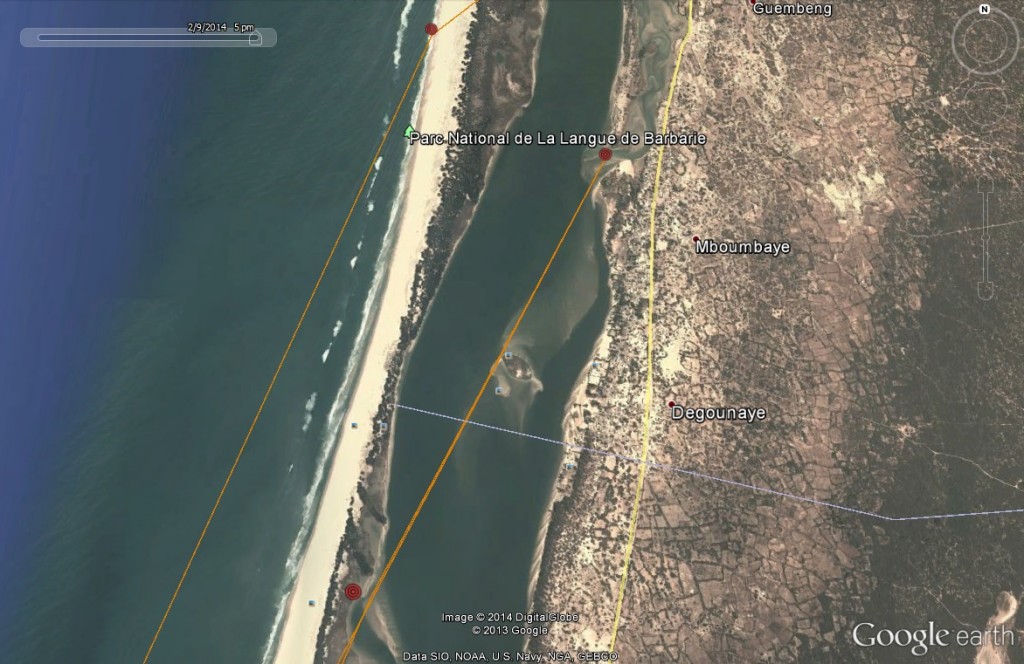 Will he stay put now or will he feel the pull north? Only time will tell!

Osprey Q and A:

Q: Have any other young Scottish ospreys with trackers survived to return as adults?

A: Yes, one called Rothiemurcus , tagged by Roy Dennis, has done so in recent years- surprising us all by migrating north  at two years of age! He and his transmitter are still going strong though he hasn’t settled down to breed yet.

Q: As well as visiting Loch of the Lowes I greatly enjoy reading your blog and following Blue YD’s exploits. But I wonder, for how much longer will we be able to get this data. Surely the battery in his GPS backpack can’t last for ever?

A:  The manufacturers of these particular tags only  recommend they last 2 years with normal use, but colleagues have tags on birds still functioning for going on 4 years. We can only hope Blue YD’s tag will continue to work until he is old enough to attempt his first return migration so we can gain valuable insight into if and how it varies from his journey out to Africa. So far he’s proved a hardy and successful bird and fascinating for us!

Q: I having just come back from Cape Verde off the west coast of Africa we were lucky enough to have an osprey nest 200 yards from our accommodation. They appeared to have mature chicks/juveniles and we wondered if these would be our UK birds but we didn’t think they would breed whilst wintering in Africa.  Which begs the question if they are not from Northern Europe where have they come from or do some just live and breed in Africa and stay put all year?

A: Lucky you visiting Cape Verde. We have heard quite a lot about ospreys from there in recent years and yes we understand there are some year round resident birds.

It seems ospreys in some parts of the world will stay all year round in tropical areas if the conditions are perfect. For example there are some in the Caribbean who do not migrate and historically there were some also around the Mediterranean which stayed put all year. Scientists do not know why some osprey populations have this different survival strategy, but it appears to be a very specific combination of ideal factors such as day length, food, and weather that make this possible. It should be stressed that the vast majority of ospreys worldwide do migrate to take advantage of longer days, and seasonal food gluts etc.

To quote Roy Dennis: ” there are still about 70-80 pairs of ospreys on the Cape Verdes, but they are very isolated. At present it is thought they do not migrate but I think the population is occasionally topped up by lost vagrants from northern Europe, including one ringed bird form Scotland . These ospreys fish in the sea and even nest on palm trees, but most are nesting on the ground on remote islands or high cliffs and extinct volcanoes”

I have come across a couple of interesting scientific papers on Ospreys in Cape Verde, which examined how their breeding success was declining there due to encroachment of human , and particularly tourism, development on their habitats and disturbance.

Our young osprey Blue YD is still on the coast of Senegal  as of yesterday, presumably enjoying fishing the warm lagoons behind the tropical beach! Since heading to the coast …