Our Trustees’ Awards for Volunteering celebrate the contribution of volunteers to the work of the Trust. These awards are presented every two years at our National Members’ Day and are supported by players of People’s Postcode Lottery.

We are supported by around 1,000 volunteers who carry out a huge range of tasks, from maintaining and restoring important habitats on wildlife reserves to engaging with the public at our visitor centres. Volunteers also play a vital role in running our local groups and within conservation projects including our Living Landscapes and the Saving Scotland’s Red Squirrels partnership.

Scottish Wildlife Trust Chair Linda Rosborough said: “These awards are a wonderful chance to recognise the positive impact made by the Trust’s enthusiastic volunteers. This year’s winners demonstrate the breadth of volunteering opportunities that we provide, and show that dedicated and passionate people lie at the heart of every conservation success story.

“I’d like to congratulate everyone who has won an award, and also thank each and every one of our volunteers for the time that they dedicate to supporting the work of the Trust. Every hour spent volunteering makes an invaluable difference for wildlife.” 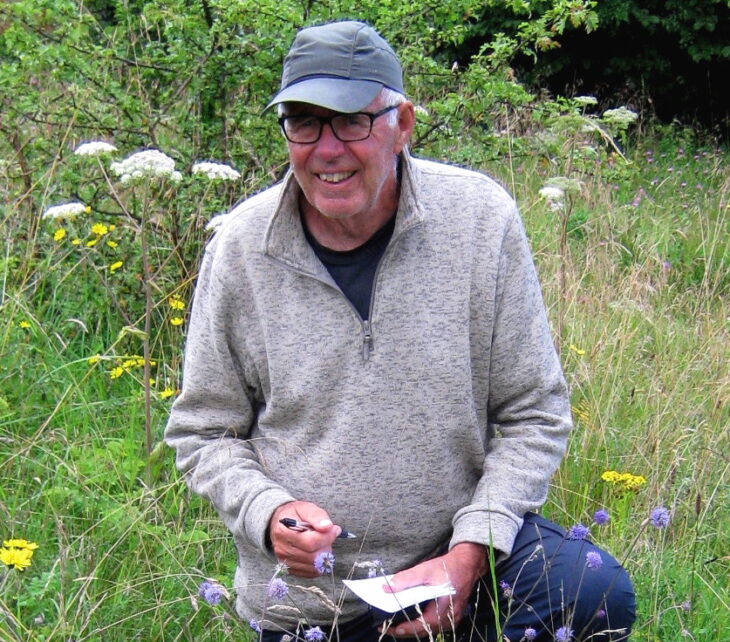 Roy has dedicated the past 20 years to voluntary work on behalf of the Trust in the Stirling area and is well known for his unflagging love of nature. Along with his wife Sue, Roy restarted the Stirling and Clackmannanshire Local Group in 2000 to promote the Trust’s work in the area and protect local wildlife. Under Roy’s leadership the group has excelled at running a varied winter talks programmes and many other activities, as well actively monitoring local wildlife sites, responding to planning applications, and undertaking work including removing invasive non-native species.

One of Roy’s most successful projects has been the ongoing conservation of sticky catchfly. Stirling is home to the largest colony of this rare plant anywhere in the UK but it is declining due to increasingly dry summers. Roy collected seeds from several plants, grew them on and planted them out to bolster the population. He also worked with the local heritage trust at Alva Glen where another population of sticky catchfly had gone extinct. Several plants have now been translocated to this site and the latest survey recorded 37 spikes. Without Roy’s dedication, it is possible this plant would have disappeared from the local area altogether.

“I have met so many wonderful people, been to some fantastic places and of course natural history gets more interesting the more you know about it.”

Roy said: “I feel very honoured to have been presented with the Lifetime Achievement Award and it will be a challenge to walk in the footsteps of the last winner David Shenton who has managed the Loch Ardinning Nature Reserve for so many years. In 2000 my wife and I resolved to resurrect the local group as our retirement project and I would like take this opportunity to thank all those who have helped get it up and running again.

“I would thoroughly recommend getting involved in wildlife conservation to anybody looking for a fulfilling and enjoyable way of spending their retirement. I have met so many wonderful people, been to some fantastic places and of course natural history gets more interesting the more you know about it. I am also delighted to report that we have recruited a new Chair, Guy Harewood, and a Vice-Chair, Chris Cathrine, who have hit the ground running. Under their leadership I am confident our Local Group will go from strength to strength in the future.” 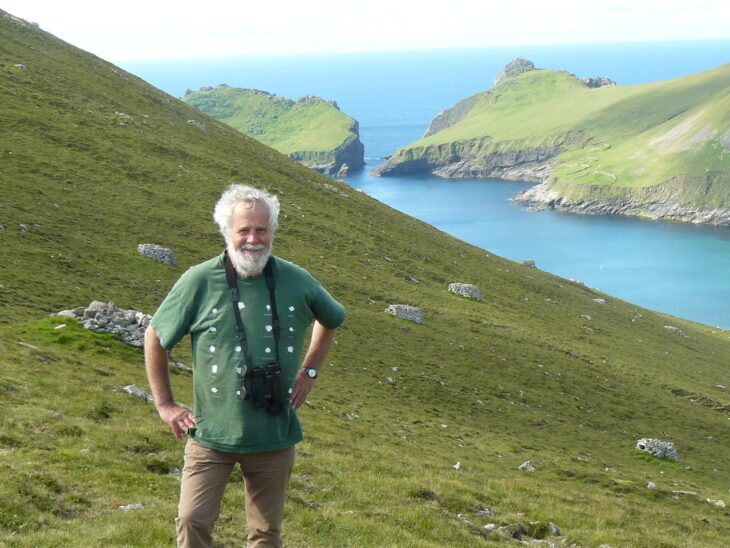 Peter has been a champion of community action to protect threatened red squirrels in the South of Scotland for many years. He currently chairs the Gatehouse Squirrel Group in Dumfries and Galloway, and founded the successful Red Squirrel Forum for South Scotland in 2018.

This umbrella organisation brings together all red squirrel volunteer groups in South Scotland, and works closely with the Saving Scotland’s Red Squirrels partnership, helping to keep red squirrel conservation work done in South Scotland up-to-date and in line with the most recent research and developments across the country.

Recently Peter spearheaded a successful funding application from the Red Squirrel Survival Trust which will equip all 18 squirrel network groups across South Scotland with a thermal imaging scope and trail cameras. This equipment will make surveys more efficient, increasing the groups’ impact on the ground. 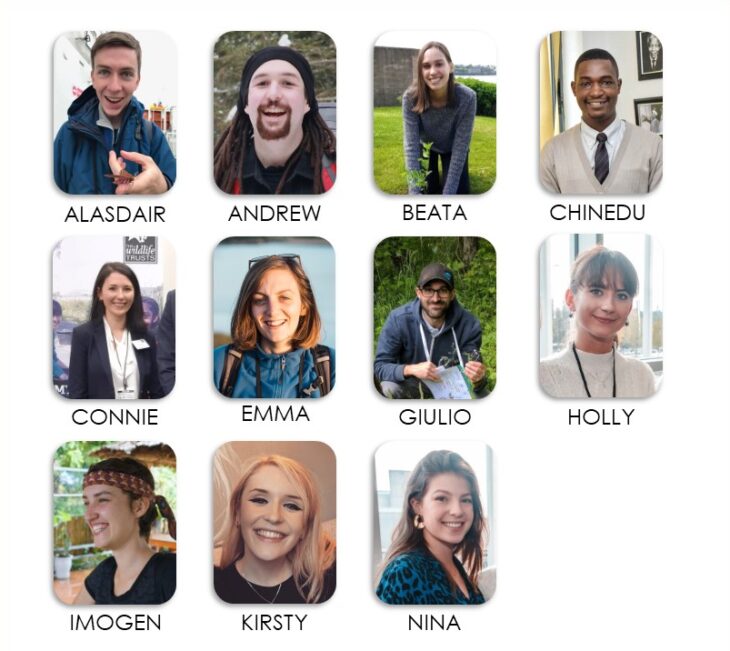 The Trust’s Young Leaders are a group of around 12 young people age 20-30. They have the opportunity to share their passion and fight for Scotland’s wildlife through projects which they create. The group has helped to develop a Conservation Awards programme, which is being trialled by the Trust and launched a Facebook group called Wildlife Champions to share ideas and keep the energy and involvement high.

Young Leaders have helped out at school wildlife sessions and attended parliamentary events on behalf of the Trust. They are also now involved in the Trust’s decision making, through attendance at our Conservation Committee, and are organising a series of online ‘Climate Conversation’ events to coincide with the upcoming COP26 talks in Glasgow next year. 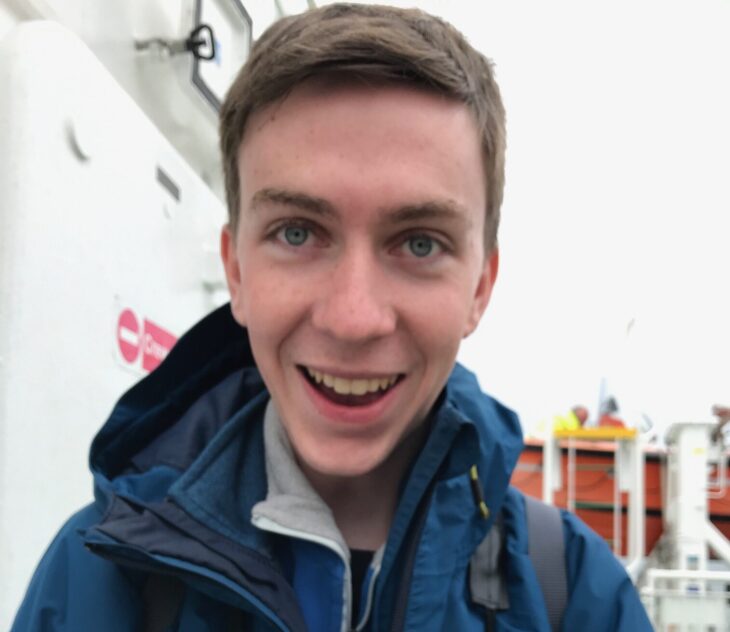 Alasdair has dedicated his entire life to the protection of Scotland’s nature and wildlife having started his Marine Biology degree at just 16 and continued this passion with a Masters at Edinburgh Napier University. His contributions are outstanding given his young age. Alasdair has been involved with our Stirling and Clackmannanshire Local Group since 2017 and is now its secretary. He has also played a key role within the Scottish Wildlife Trust’s Young Leaders group, helping them design and implement a new Conservation Awards scheme designed to give future ecologists work experience skills and co-creating content for the very successful Wildlife Champions Facebook group.

Alasdair is also active with Scottish Ornithologists Club, Scottish Badgers, British Divers Marine Life Rescue and was a finalist in the Young Nature Champion category for the 2018 Nature of Scotland Awards.

Find out more about volunteering with the Scottish Wildlife Trust

Our Trustees’ Awards for Volunteering celebrate the contribution of volunteers to the work of the Trust. These awards are presented every two years at our National Members’ Day and are …

Beavers can be introduced into new areas of Scotland