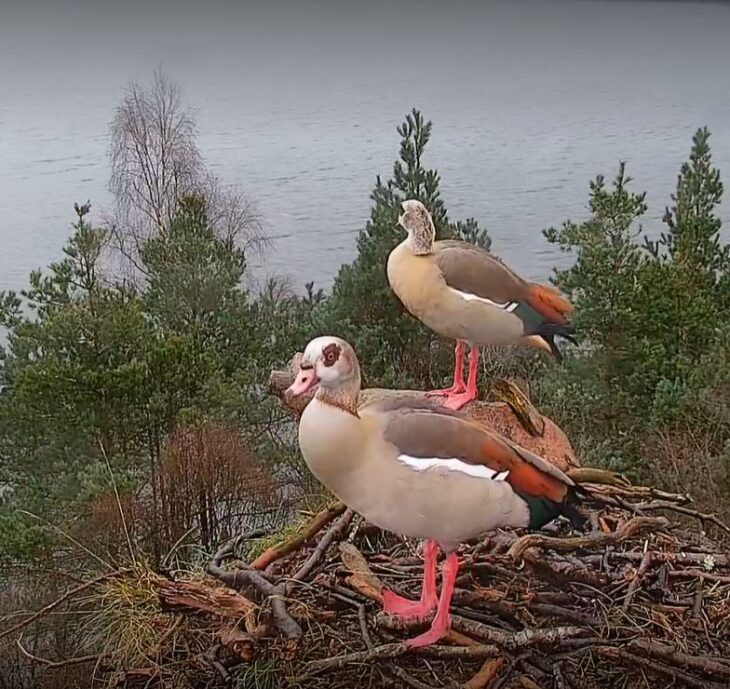 Why would these noisy, plump birds even attempt to get near a pair of raptors with a hooked bill and sharp talons? The answer is simple: they want to push the ospreys off the nest so they can claim it as their own. But, wait! These are geese, and they only nest on the ground or slightly elevated from it, so why are they keen on a nest in a tree in the first place?

The first clue requires us to look at the species of family they belong to, also known as taxonomy.

Family: Anatidae (including geese and ducks)

Sub-family: Tadorninae (shelducks only, no geese)

The Tadorninae sub-family includes birds which are a cross between geese and ducks. So, the Egyptian goose looks like a goose, and has goose in its name but, technically is a type of shelduck! At least, the attribute Egyptian fits well, as it is a bird native to the sub-Sahara and the Nile Valley. They are largely widespread in the African continent and are known for nesting in all sorts of places, such as rivers, marshes, lakes, cliffs, crocodile old runways (!) and trees. They can even nest at 25 meters from the ground and love to occupy other birds’ homes, including raptors. The only characteristic that would make or break a deal seems to be the proximity to water. Never mind difficult neighbours, as long as there is a pool!

The chicks are precocial, meaning they are born with their eyes open, with feathered down, and are able to move so that they can leave their nest soon after hatching, in order to follow mum and dad in their search for food. The parental skills of these birds however are a little unorthodox. Picture this: you are a few hours old chick and you absolutely need to find the courage to jump off your nest from a tree or starve to death, and your parents’ only contribution to the cause is loudly shouting calls of encouragement from the ground underneath…!

Egyptian geese were introduced about three centuries ago in Britain by humble noblemen who wished to decorate their private estate and lakes with a variety of exotic, non native species. Of course the geese escaped and became feral. As of 2014, 90% of the British population (about 900 individuals) currently resides in the Norfolk area.

In Africa, Egyptian geese can breed anytime after the dry season, from July to March.  This has led to some pairs in the UK still breeding very early in the year, with pairs defending potential breeding sites from January onwards. In fact, you can see in the following video a pair checking the osprey nest before LM12’s arrival on 13th March of this year and later being quickly shown the exit door!

Intrusions by the Egyptian geese have been observed on an almost daily basis following the return of the resident ospreys, with 5 intrusions recorded on the 11th of April alone! This appears however to be the last day they attempted to land on the nest, with LM12 and NC0 chasing them finally out of their territory the following day.

As soon as the Egyptian geese gave up trying to establish themselves on the nest, the Canada geese showed up. They have been seen swimming daily on the loch and on the 5th of May a pair was spotted with five goslings! Although equally noisy, these geese do not seem to bother our resident ospreys as much as Egyptian geese, even though they are chased occasionally – perhaps as a bit of ‘sport’!

Canada geese nest on the ground or just above it, but occasionally will use suitable tree nests, especially if they are empty. Whilst gosling will make the jump in a similar fashion to their Egyptian counterparts, they largely favour nests on low ground, making those first ‘steps’ a little less daunting for their young!

In the following video, you will see LM12 chasing a flock of Canada geese on the 13th of April when they descended on mass. Once the flock began to disperse in the following weeks and pair up the incidents of chasing have all but stopped.

Corvids, and specifically ravens and carrion crows, are another group of birds who have been frequently chased off by the ospreys at Loch of the Lowes. They are kleptoparasites, meaning that they steal food (or animated objects) from other species if the opportunity occurs, saving energy and time as a result. The species most likely to be targets to having their lunch stolen, are those with who tend to eat large, high-energy food, which takes time to eat. It is easy to imagine how the ospreys are the perfect birds to steal from, with their relatively large fish-only diet, relatively slow eating habits and tearing up of morsels of food for young which may be dropped on the nest.

During Osprey Watch we have frequently seen carrion crows and ravens being chased off by the resident ospreys, even before the first egg was laid. It is clear they are after the fish that the ospreys, and especially NC0, eat while perching on the split birch.

At the beginning of April crows and raven were spotted intruding almost daily and were aggressively chased until the first egg was laid. Since then, their visits have been sporadic with the last record on 6th of May. Whilst ravens are largely absent, their young having already fledged, crows are however still spotted daily in search of food to steal, especially round the split birch feeding tree, but seem give the osprey nest a little bit more of a respectful wide berth.

Historical Osprey Watch records at Loch of the Lowes show that a carrion crow has only managed to predate an egg on one occasion, back in 2014 – the final year of long term breeder ‘Lady’.  Interestingly, this was the year that two of the eggs that were laid did not hatch and were later found to be infertile, marking the end of a remarkable era.

Generally, the resident osprey pair work exceptionally well as a team to defend their nest, eggs and young.  In addition to this our team of Osprey Watch nest protection volunteers and staff work around the clock to ensure any human disturbance is prevented, since this can cause the ospreys to flush off the nest, leaving the eggs or chicks exposed to chilling and to the opportunistic predation by other species looking for a quick meal.

No doubt we have not seen the back of intruders on the nest – next up we can expect the two year old young ospreys, looking for their first territory and nesting site!