With ospreys off on migration from Loch of the Lowes, we thought it would be a good time to share some of the data we collected during our Osprey Watch this year. Get ready for some graphs!

Our male (LM12) and female (NC0) ospreys returned on the 21 and 23 March respectively, and the monitoring began with the Species Protection Officers (SPOs) on 5 April. Our Osprey Watch volunteers and SPOs collect all sorts of data across the eight weeks of nest protection, including mating attempts, fish brought to the nest, incubation changes and intruder events. Here are some of our findings this year.

Our ospreys did the bulk of their mating from the 5 – 9 April, with attempts becoming less frequent as the first egg was laid on the 11 April, and with no successful attempts being made after the second egg on the 14th. In our monitoring, we count successful mating as the birds cloaca making contact, a rejection as when the female osprey either shrugs the male off or gives him a peck, and a failure as when connection isn’t made for some other reason- e.g the male loses balance.

Our ospreys’ favourite fish species this year was pike, with trout a close second. 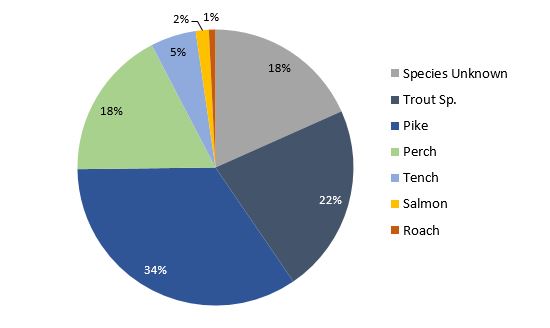 Trout and pike were brought to the nest throughout the season, with perch and tench becoming more common towards the end of the watch. Across the season, only two salmon were recorded as well as one roach. You can also see how the number of fish being brought in increased with the chicks hatching on 17, 20 and 22 May respectively.

We also took a wee look at the timings of our fish deliveries, which, during the monitoring period, were exclusively by LM12. It appears the most common drop off times were later in the day, between 2-3pm and 6-7pm. 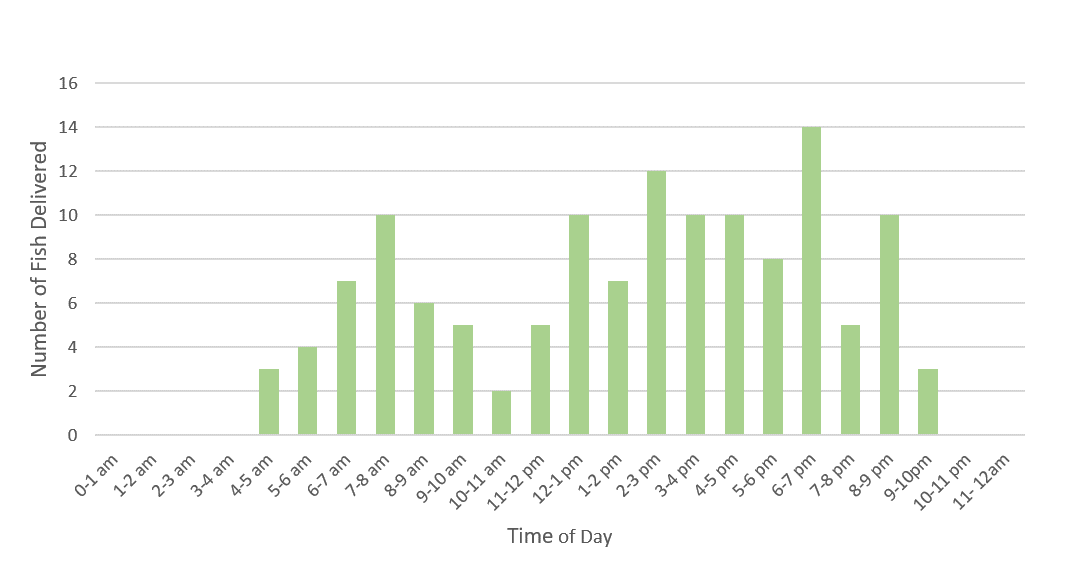 We had three eggs hatch this year, although we sadly lost our youngest chick in a bout of bad weather at only a few days old. Here is a graph of how long the chicks took to hatch, relative to the dates they were laid. The dashed black lines show what the expected range for any osprey egg incubation is and the dashed orange lines show the average range. You can see all our eggs were a little below the average, but still within what’s normal for ospreys.

We also took a little look at how the ospreys incubation related to time of day, up until the chicks started hatching. We found that NC0 tended to do the evening/night shift, with LM12 coming on in the early morning. These findings coincide with the peak times for fish deliveries, as NC0 would leave the nest to eat, leaving LM12 to incubate.

If you’ve been following our ospreys, you’ll know that they often face challenges from intruding birds, be that a pesky Egyptian goose or another osprey looking to drop in on their nest site. We record several behaviours relating to this, including chasing off birds, mantling and alarm calling. You can see in the graph below that our ospreys had to defend their nest throughout the season, but there was a particularly significant episode around 30 April. During this time, LM12 wasn’t seen and NC0 held the fort against a very persistent intruder for a marathon stint of 27 hours and 15 minutes.

Overall, our ospreys managed to raise two healthy chicks this season, to fledging and beyond. With LR1 and LR2 on their way to wintering grounds in West Africa, we wish them luck and hope to see them again in the future.

With ospreys off on migration from Loch of the Lowes, we thought it would be a good time to share some of the data we collected during our Osprey Watch …