Summer is officially here, and for the past few weeks we’ve been enjoying seeing a whole variety of recently fledged birds around the visitor centre. So many, in fact, that we’ve been keeping a list! 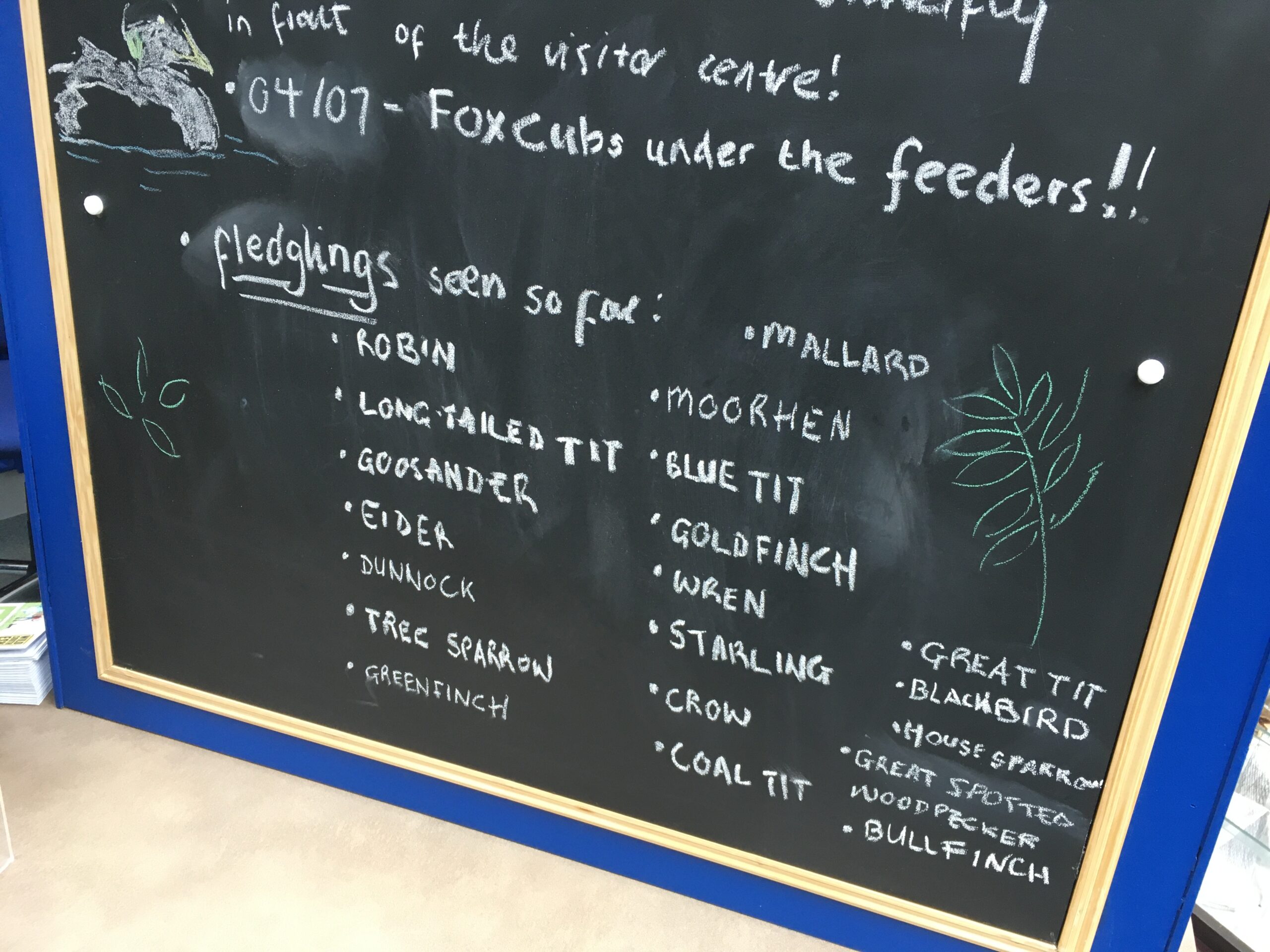 Juvenile birds cause a lot of confusion at this time of year. They often look very different to their adult counterparts, sometimes even sporting different colours, patterns, and bird calls.

We’ve found that visitors are sometimes perplexed by fledgling birds looking, if anything, bigger than their parents. This is because bird chicks do almost all their growing in the nest, and by the time they’ve fledged, their puffy down feathers make them seem a bit larger than they actually are.

So: most fledglings look very soft and chunky, they’ll often have a hint of a yellow gape around their bill, and – something that we get lots of phonecalls about from concerned members of the public – they will often look very lost and helpless. Recently fledged birds will still not be great at flying or feeding themselves, so you might see them sitting under your feeders, looking around in awe/fear of this vast new world they’ve discovered. In most cases, its parents won’t be far away.

Here’s some handy bird ID tips for fledgling birds that you might be most likely to find in your garden in Scotland.

Starlings are appearing first on our list because we get the most questions about them! Their pale brown plumage makes them look very different to the adults, and when they’re coming into their mature plumage, they can look very peculiar indeed.

Robins don’t develop their red breasts until they moult out of their speckled brown downy plumage. Baby robins look quite ‘grumpy’, and often have stray down feathers on their heads like wispy hairs.

Young house sparrows look more like the females than the males, with all brown feathers. We’ve found that they usually have a more prominent gape than other fledgling birds.

You’ll probably hear blue tit and great tit fledglings before you see them. They have a particularly insistent ‘feed me!’ call. Young blue tits are almost more yellow than blue – the yellow on their fronts is like a pastel lemon colour. Young great tits can look quite yellow too, with more of a dark stripe down their fronts.

Young goldfinches are interesting because they look almost exactly like the adults, except none of the red, white, or black colours on their heads have come through yet. But keep an eye out for those giveaway gold accents on their wings.

If you’re lucky enough to have a family of woodpeckers visiting your garden, here’s how to identify the males, females, and fledglings.

There are of course many other fledgling birds that you could see in your garden at this time of year, but hopefully this little guide has gotten you started at least!

Summer is officially here, and for the past few weeks we’ve been enjoying seeing a whole variety of recently fledged birds around the visitor centre. So many, in fact, that …