Many animals cannot control when their young are born. But birds are able to influence when they want their eggs to hatch.

There are two ways they can do this. Firstly, the females can control the timing of the development of her eggs before they are laid, and secondly, the adult birds can decide when to begin incubation, as egg development does not begin until the adult warms the eggs.

In most animals, hatching or birthing is synchronous. That means offspring are born at the same time, or within a short time of each other. In synchronously hatching birds, eggs in a clutch hatch within a few hours of each other despite being laid days apart, due to incubation only starting after the last egg is laid.

Some bird families, including raptors like ospreys, practice asynchronous hatching. This refers to a clutch of eggs that hatch days apart rather than hatching at the same time.

Incubation begins as soon as the first egg is laid, rather than waiting until after the last egg is laid. As the earlier eggs were incubated and began their development sooner, eggs hatch over several days rather than all at once. 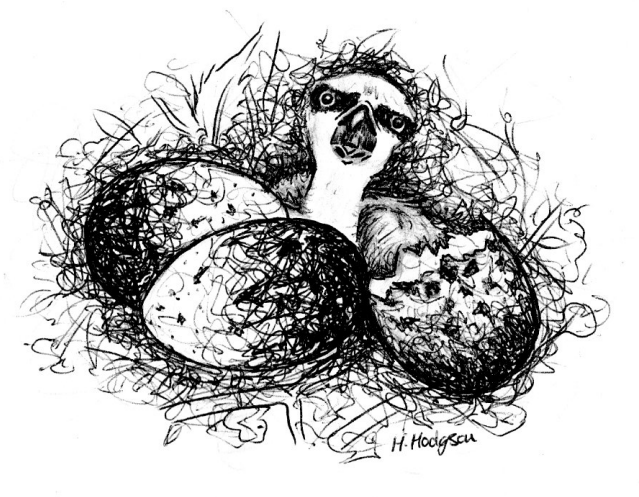 Female ospreys lay between 1-4 eggs, at intervals of 1-3 days apart. It regularly takes over a week until the full clutch is laid. Consequently, the time between the hatching of the first and last eggs can be as much as this too.

The last chick to hatch often faces a higher risk of mortality due to being younger and lighter than their siblings.

One theory is that this acts like an insurance policy. If the earliest chicks are lost to predation or damage, or the egg is infertile, the later ones may still survive. However there are other ideas.

Another possible reason for asynchronous hatching is that females may prolong the time between laying to allow her to provide each egg with enough food. Laying is an intensive process that depletes the female birds own stores – delaying allows them to recover and replenish between each egg.

Other theories state that asynchronous hatching decreases loss from predation, as it reduces the period that the whole brood is vulnerable and exposed to predators. Having eggs hatch over a period of time also allows the parents to take advantage of unpredictable and rapidly peaking food resources.

Some believe that it might be a way to reduce the ‘peak energy load’, or the amount of time that parents have to care for all the chicks at the same time.

Despite these strategies, it appears that having nestlings of different sizes can often result in the death of the last hatched chick, reducing chick survival and therefore adult reproductive success.

Why have a strategy that seems to be a waste of time and resources?

Studies have found that despite nestling mortality being higher in asynchronous broods, the mean nestling weight of fledged chicks is also heavier. Lack devised a hypothesis that this increased body weight directly related to a higher rate of survival of the fledglings into adulthood.

Osprey chicks are renowned for putting on 70% of their body weight within the first four weeks of their lives. By the time they migrate have plentiful reserves to support them on their migration to West Africa.

The ability of asynchronous chicks to fledge at a heavier weight than their synchronous counterparts therefore, increases their chances of surviving the challenging post-fledging period and in the long term, improves the species long term breeding and reproductive success.

Over the years the ospreys at Loch of the Lowes have been highly successful at managing to raise the vast majority of their chicks to fledging. This is most likely due to the great source of fish and hunting grounds in the area and the relative lack of competition.

The long term data set from 1971 until 2020 is even more impressive. In 50 years, only 4 young who hatched failed to make it to fledging! 87 eggs were hatched by the combined efforts of the first breeding females on the reserve in the 70s and 80s, followed by Lady, LF15 and NC0. In that time 83 young osprey fledged, equating to a massive 95% success rate for our ospreys!

It has been over a month since NC0 laid her clutch of three eggs, and her first two hatched on 17 and 20 May. It will be exciting to watch her third egg asynchronously hatch over the next few days and get a first glimpse of LM12 and NC0’s chicks.

Many animals cannot control when their young are born. But birds are able to influence when they want their eggs to hatch. There are two ways they can do this. …