We’ve had some breaking news here at Loch of the Lowes!

Yesterday at around 1pm we noticed NC0 becoming increasingly agitated. She was regularly getting up and fussing with the eggs, settling down then standing up again. It wasn’t long before we spotted a small pip hole on one of the eggs, which slowly began to grow. The egg was hatching! 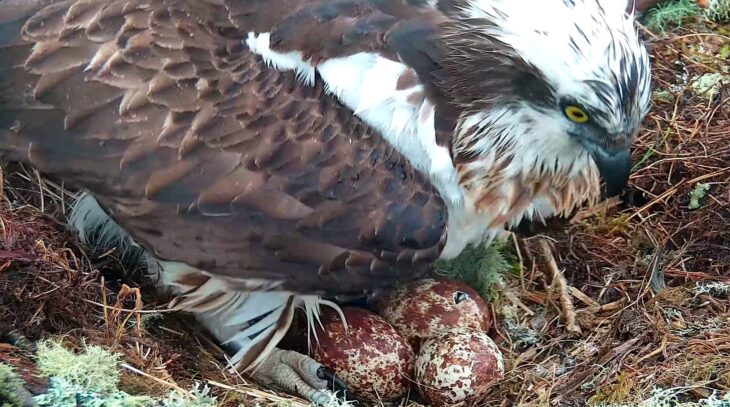 Over the next few hours we heard the tiny chick loudly cheeping from inside its egg as a restless NC0 continued to shift around. Eventually, just before 10pm, the chick hatched out.

It fully emerged from the shell in the early hours of this morning and we’ve been treated to some lovely views of the tiny chick overnight.

This chick also didn’t have a long wait for its first taste of fish! Just after 8am the male osprey LM12 arrived with a fish in his talons. After a slightly wobbly start the chick was able to find its mother’s beak and receive a few mouthfuls of food. This will be the first of many feeds as the young bird develops over the weeks to come.

We’re hoping to see the other two eggs in the nest hatch this week. Keep up to date with all the action by watching via our live webcam, or why not visit Loch of the Lowes Visitor Centre in person? Booking is highly recommended so visit our website to book your tickets.

We’ve had some breaking news here at Loch of the Lowes! Yesterday at around 1pm we noticed NC0 becoming increasingly agitated. She was regularly getting up and fussing with the …

Loch of the Lowes, osprey