It’s been over 3 weeks now since NC0 laid her 3rd egg, and with the first chick due to hatch in just over a week, we thought we’d look a little closer at our new-arrivals-to-be.

We’re so used to seeing eggs on supermarket shelves that it can be easy to forget that these beautiful gems are actually living beings. They may not look like they’re doing much but under the shell we’re watching three new ospreys, growing from a single cell to an entire chick in around just 5 weeks.

So how did our eggs come to be?

Well, their story really began some 3000 miles away in West Africa, when both their parents independently answered the call to journey North. After arriving just 4 days apart, on the 21st and 25th March for their second season together at Lowes, LM12 and NC0 engaged in a bit of nestoration, and began to mate.

Ospreys only have one breeding season per year, and it is not known how long the female’s fertile period lasts. What we do know is that our ospreys mated over a period of 14 days, from when monitoring began on the 5th April. The bulk of this occurred before NC0 laid her first egg.

During this time, the female’s body is undergoing hormonal changes, that eventually trigger her to release an as-yet-unfertilised egg, with attached yolk sac, from her ovary, into the top of her oviduct. The yolk is full of all the proteins and nutrients that the embryo will need to see it through its transformation into a chick. Sperm from the pair’s mating attempts will swim up the oviduct and fertilise the egg.

As the fertilised egg, with its yolk, travels down the oviduct, various glands add to it- first the white of the egg is added, which is mostly water and some protein, then flexible membranes are added around the egg and yolk and finally in the shell gland, or uterus, the hard but porous calcified shell forms. The pores in the shell are essential as they allow the embryo to ‘breathe’ in oxygen and expel carbon dioxide. It is at this final stage, in the last few hours before being laid, that the gland lays down the egg’s pigment, giving it its beautiful mottled appearance. This helps to break up the profile of the egg, making it harder to spot for any predators.

The whole process takes about 24 hours– from an unfertilised egg and yolk sac, to the osprey egg we recognise. It is now ready to go out into the world, complete with all the food, water, and access to oxygen that it needs to see it through its coming transformation.

Did you know? Female ospreys can lay eggs even if they haven’t mated, and the eggs aren’t fertilised. Blue CJ7, a young osprey at Poole Harbour has been documented doing this.

Once one egg has been laid, the process repeats, with ospreys usually laying 2 to 3, or even 4 eggs 1-3 days apart. Our resident female, NC0, took the full 3 days between each of her eggs, laying on the 11th, 14th and 17th of April. The first two eggs were heavily pigmented, whereas egg number three was much paler- which means we can always spot it!

One thing the eggs cannot do is regulate their own temperature, which is why they must be incubated by their parents. The eggs can be left for short periods of time, usually up to 20 minutes, but if the weather is particularly bad or they’re left for too long, they can chill and the developing embryo can die. There is also a risk that an opportunistic predator may drop in and take advantage. This is one of the reasons we run 24/7 nest protection at Lowes during this stage- as an unwitting disturbance could potentially cause the ospreys to lose their eggs.

Ospreys incubate their eggs for an average of 37 days.

In 2019 there was an unusual and worrying incident were the first egg laid at Lowes was left uncovered for 2 hours and 20 minutes, when the male left the nest unexpectedly at 3.05 am on a cold and wet night. Fortunately, all three eggs hatched that year- showing that perhaps they can be left longer than previously thought if this occurs relatively early in their development.

The longest the eggs have been uncovered this year was for a period of 37 minutes. There didn’t seem to be any disturbance that caused this, and the female osprey was perched nearby at the time. Hopefully this hasn’t had any impact on the eggs but only time will tell! 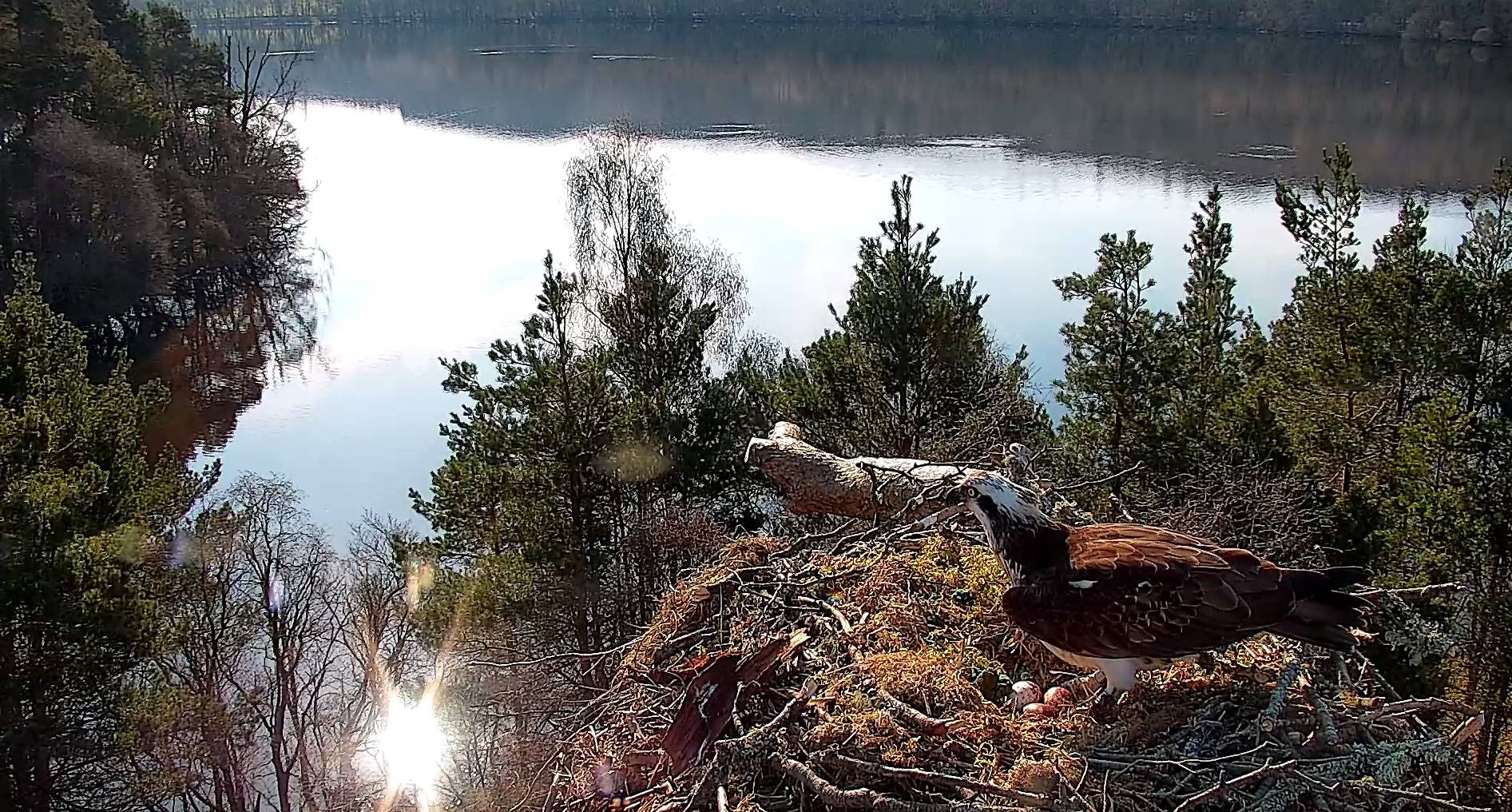 We’re looking forward to meeting the new chicks soon, with the first predicted to hatch around the 17th May. In the meantime, you can keep up to date with all the osprey goings–on via our live webcam, or why not visit us in person? Booking is highly recommended so visit our website to book your tickets.

It’s been over 3 weeks now since NC0 laid her 3rd egg, and with the first chick due to hatch in just over a week, we thought we’d look a little closer …

egg, Loch of the Lowes, osprey