Loch of the Lowes was purchased 11th May 1969. It took 2 years to complete the purchase from the first time the idea was conceived to when the ink dried on the deeds.

Lowes was the first reserve that the Trust, then just 5 years young, had ever bought outright. Their other reserves were either leased or managed on behalf of the owners. Loch of the Lowes and fringing land was purchased because of its diversity of habitats and wildlife, and for the opportunity offered to conserve the area from deleterious development. At that time, the Trust had several local branches and the branch most local to Lowes was the Perthshire branch. Therefore, the responsibility of daily management of the reserve fell to them.

1st July 1969 Maurice Drummond was appointed as honorary (volunteer) warden. A local man from Butterstone (a village just along the road from Lowes), he knew the area very well. Within weeks of the purchase and Maurice starting work, a pair of osprey arrived on the reserve. A remarkable coincidence and a species the Trust were delighted to welcome to the reserve. The pair did not breed that season, arriving later than we would now consider normal for a breeding season but plans were then set in motion to protect and observe future pairs of osprey. During that first summer, access to the reserve was limited and you had to write to Maurice enclosing a stamped addressed envelope to request a permit of access.

In January 1970 a Reserve Management committee meeting was held to discuss how they would go about protecting the birds should they return. It was suggested that an osprey expert be invited to the next meeting and it should be RSPB Loch Garten’s very own Operation Osprey founder George Waterston. In February an extraordinary Committee Meeting was held at Lowes and George Waterston attended. No doubt providing lots of important protection information from the 5 years’ experience of conducting Operation Osprey.

It was also decided that Maurice should be a paid warden and so he became the first paid ranger on a Trust owned reserve. In this year, the Trust also decided that the reserve should be made accessible to the public and a hide was to be erected for them to observe the wildlife. The hide was an exciting addition to the reserve and at a cost of £250 quite an investment. It was constructed from wood and stood on stilts to achieve a good height to observe the wildlife on the loch. At that time the osprey nest was in a different tree from where it is today but the osprey were still visible to the public.

A pair of 10 x 80 Ross battleship bridge binoculars and a stand were donated by Arthur Frank of Charles Frank Ltd, for use in the new hide. That summer, it became apparent very quickly that the hide needed to be manned during the day at the weekends to assist the public in identification of the waterfowl, osprey and vegetation of the loch. So began the training of the first “guide in the hide” volunteers, something we do to this day. Our guides are fortunate that we only ask them to do a 3.5 hour shift once a week. Back then, the hide had a guide from 2.30pm until sunset when the reserve was busy. Potentially an 8 hour shift in midsummer.

The ospreys did indeed return and laid eggs but they were lost in a storm and the tree was damaged. The ospreys stayed around after losing their clutch, no doubt creating a frustration eyrie just as our pair did in 2014. This was only the 5th recorded site in the UK at the time to have a breeding pair of osprey. The management committee would have to work hard over the autumn and winter months to protect the trees from further storm damage.

In June of that year, HRH Duke of Edinburgh visited Dunkeld and enjoyed a trip up by car to see the reserve. Meeting with some school children from Goodlyburn primary school, Perth who had been keeping the reserve tidy on weekends.

The first year of the reserve was a very busy year. Between preparing for ospreys, building the hide, training and recruiting volunteers, royal visits and an estimated 8,000 people visiting between May and September. Mr Maurice Drummond had his work cut out for him!

1971 was set to be even bigger as word got out that Loch of the Lowes had breeding osprey. This year a pair returned on 16th and 17th of April and started using nest number 2. Most likely the frustration eyrie from the previous year. Nothing was noted in Maurice’s ranger notes as to whether or not it was the same pair but we can assume that it was as there were so few around. The original tree was guyed over the winter in an attempt to stop it blowing over and make it more stable but the birds had obviously recognised that it wasn’t worth using a second time.


In May, the committee created a pamphlet about the osprey to insert into their Loch of the Lowes booklet. The booklet comprised 24 pages noting the history of the site, geology and descriptions of the vegetation. Given to the public for a donation, it is still a very interesting read.

The ospreys meanwhile had had their first successful hatching of chicks with 2 hatching and 2 fledging. It was also the first time anyone had the opportunity to ring osprey chicks at Lowes. This practice has continued over the years with PT4 and PT5 being added to a long line of successful ringing and data collection.

In those days, they did not have the convenience of a web camera. They would have needed to keep close observations of the nest to observe the changes in the adult bird’s behaviours, to discern when the eggs hatched and therefore when to ring the chicks.

With interest in the reserve continuing to grow, the Trust consulted the Countryside Commission (later Scottish Natural Heritage) on how to manage the increasing number of people. It was suggested a visitor centre be built to accommodate Lowes’ newfound fame. The project began in the December of 1971 with the intention of being ready for osprey season the following year: 28,900 people enjoyed the reserve that year.

How many more could a visitor centre entertain?

Our next event is going to be delivered by Emma Rawling – Community Ranger for Cairngorms Capercaillie Project. Booking essential. 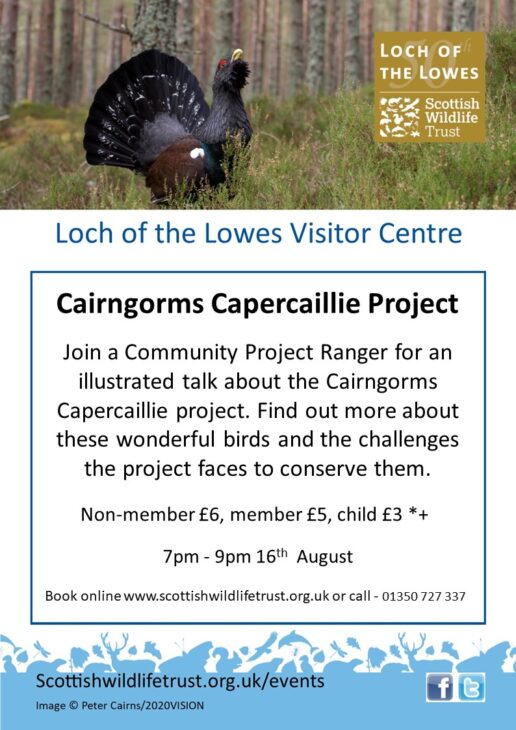 Loch of the Lowes was purchased 11th May 1969. It took 2 years to complete the purchase from the first time the idea was conceived to when the ink dried …