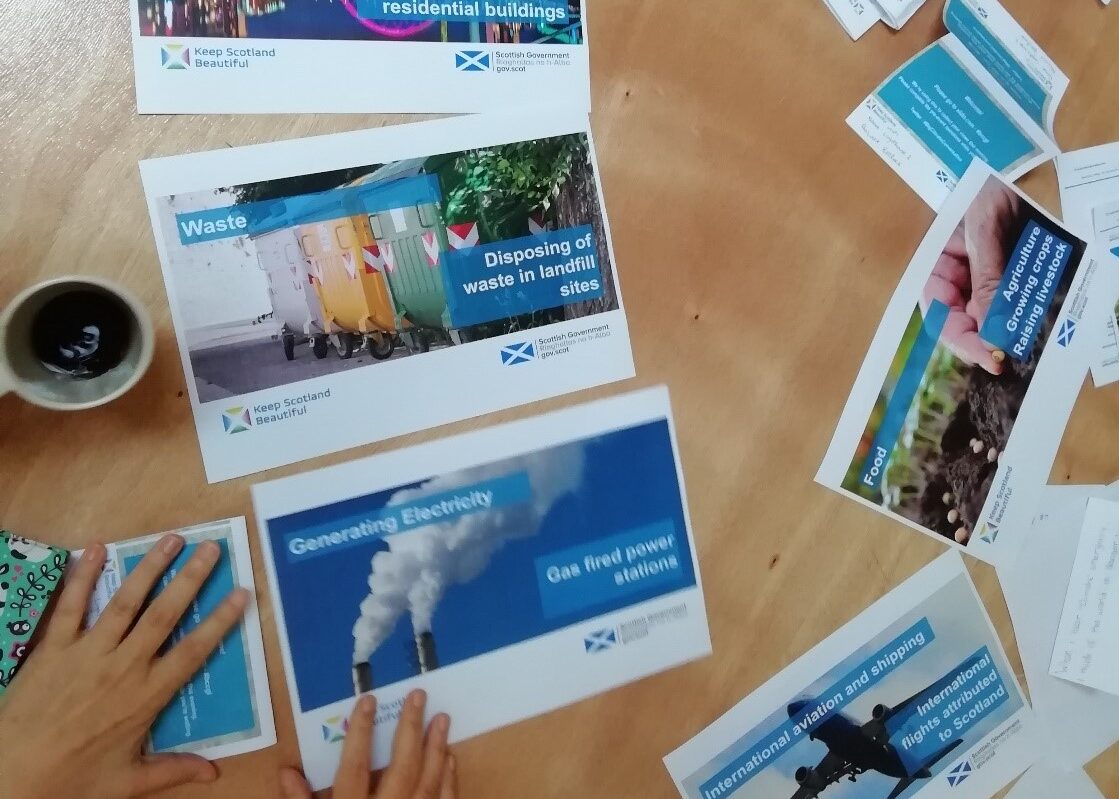 The Scottish Government’s inaugural “Big Climate Conversation” on combating the climate emergency took place in Glasgow on the 16 June. I found a mixture of essential, engaged talks with similarly concerned people, but also protest at the Scottish Government’s narrow focus and exclusion of systemic problems. The climate and ecological emergencies require us to stop tinkering at the edges of catastrophe. Engaging the public on what a future, sustainable Scotland could look like is essential.

Following the declaration of the climate emergency in April, the Scottish Government has launched a series of conversations across Scotland with the “hope to reach thousands of people and organisations to hear about their concerns, priorities and ambitions”.

The event in Glasgow drew around 65 people to The Lighthouse to discuss what the climate emergency is, and what kind of actions people want to see. Arranged into tables of around eight, participants were asked to sign into an online portal from their smartphones that would record their responses to questions and display them, anonymously, on the projector at the front.

Jennifer Hutton<@MissJGHutton> ⋅ Jul 17
The #BigClimateConversation event in Glasgow last night. 🌎 An opportunity for people of all ages to come together and discuss potential ideas proposed by @scotgov in response to the #climateemergency.

To kick things off, participants were asked, on a scale of one to ten, how much they knew of the climate emergency declaration, how worried they were, and finally to give one word that describes how they feel about climate change.

It set the tone. What emerged was an incredible disconnect between the feelings expressed here, and the options offered to us by the Scottish Government.

Asked to rank a long series of individual actions on a “readiness ruler”, participants challenged how the actions were presented. Barriers to access and inequality were key concerns – most of the actions required individuals to be homeowners, drivers, employed, able to afford electric cars, and so on. Many felt unrepresented, unable to commit to many of the actions that, to the Scottish Government, make a climate-aware citizen.

When the government, or anyone, asks these questions, they present what’s possible and what’s permissible. In presenting such individualised, disconnected solutions, they give a misleading impression of the crisis.

Here, we were more consumers than citizens, our agency defined for us in simplistic ways. For instance, whether or not we “chose” an electric car was an indicator of sustainability. Before we consider the still serious impacts of electric cars (such as material footprint and reliance on rare Earth metals), this locks us into a future of towns and cities designed around private car ownership, road building contributing to habitat fragmentation, and so on. As problematically, it ignores the affordability issue.

Following an impassioned debate, the convenors asked for a show of hands – who felt that the questions were too narrow? A near-unanimous roomful of hands sprung up.

While we should do any actions we can, we shouldn’t be fooled into complacency – the scale of the climate and ecological emergencies needs more than minor changes to business-as-usual. This reformism in the face of emergency is like paddling against a riptide: you might be facing the right way and putting in some effort, but you’ll still be swept away by the current.

One of the exercises had tables rank a series of practices from most to least “acceptable”, ranging from establishing a “circular economy” (in which materials are kept in use for longer, minimising waste and energy) to building wind turbines. The circular economy was a consistent favourite, according to the data projector, with wind turbines struggling to find as many allies. “Incentivising tree planting”, a popular option, sparked conversation about how this could restore Scotland’s woodlands.

Restoring biodiverse woodlands is a crucial step towards achieving the Scottish Government’s net-zero emissions target. At the same time as drastic reductions in emissions, the leftover emissions, such as from food production, will need to be taken from the atmosphere and stored. Trees, other vegetation, soils, and peatlands are central to this.

The Trust will work to ensure a series of natural solutions are part of our national response to climate and ecological breakdown:

For many of these, we need to continue developing our knowledge and building data, for instance on soils to determine where and how we can increase their carbon content – which has additional benefits like holding water for longer, helping to prevent flooding and increase resilience against drought.

Reducing and eliminating Scotland’s contribution to climate breakdown is not simply about what we give up and lose out on. Natural climate solutions, like restoring and protecting ancient woodlands, are also about renewal.

If you’ve ever tried assembling a puzzle or a Lego set without any idea of what the final image is supposed to be, you’ll be familiar with how we tend to approach sustainability. If you add siblings squabbling over every piece because they have different pictures in mind, you’ve got an idea of how it’s governed.

We don’t tend to begin with the big picture of what a coordinated transformation would look like, instead we make piecemeal changes here and there in the hope that the aggregate of our minor, disconnected changes produces something coherent. We treat our landscapes in similar ways.

Elsewhere, this process of envisioning something new, reimagining someplace in which to live, sustainably, has been used to great effect. It gives a positive direction for a sustainability transformation – a vision to run to rather than just a crisis to run from. In order to do that, we need Big Conversations – but we need to ensure they hear from everyone and hear what kind of transformation they want.

This conversation was, for the most part, exactly that: a room of people concerned about climate change able to talk to one another. But a clear eagerness to engage and have a meaningful conversation was, at times, thwarted by what changes were up for discussion, and what forms environmental care should take. It was clear that people were engaged but they wanted less focus on individual action and more on the importance of system change.

To help spread the word about the kind of Scotland we need, share our Big Climate Conversation videos.