The last few weeks have seen the weather in the Clyde Valley go from virtually non-stop sunshine, to a fairly constant wall of rain. The effect that this has had on the river here at the Falls of Clyde is dramatic: where water wasn’t even making it over the weir at Dundaff Linn before, you could now be forgiven for thinking that you were on a boat when looking out of the visitor centre window.

The river has gone from an idealistic shade of blue (which was actually mostly a reflection from the clear sky) to a dark brown, where sediment has washed down from further upstream. Yet, despite the slow moving water looking a lot darker, the turbulent water going over the rocks appears brilliant white. 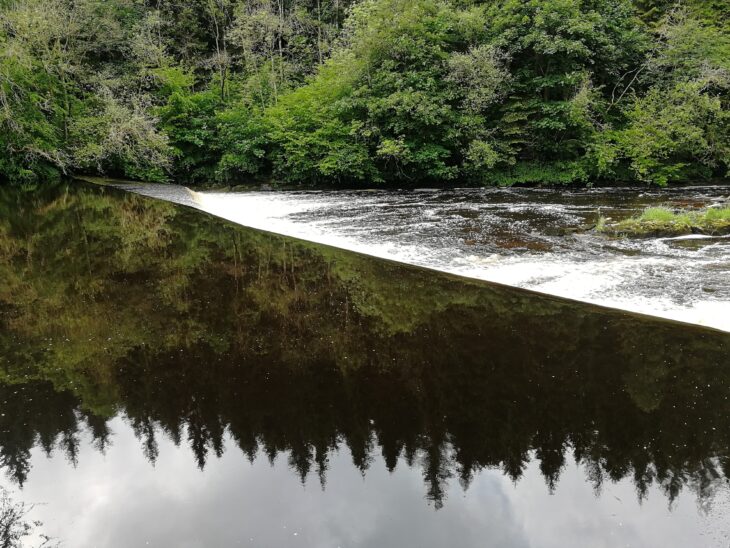 Waterfalls help to dissolve oxygen into water through aeration, which is vital for the survival of aquatic life. Photo © Becca Wilson

The reason that turbulent water turns white is the same reason why clouds, snow and the foam you get on beer also appear white. In a slow moving river light is reflected pretty much from one angle, making it act like a mirror. However, as gravity pulls water over rocks and cliff faces, the turbulence allows water to trap air, creating bubbles. The surface of a single bubble on it’s own reflects the light from its surrounding environment. Many bubbles of different size moving together still reflect light from their surroundings, but because there are so many they appear white (which is the result of mixing all of the colours of light.) The crashing noise of a waterfall isn’t actually made by the water itself, but rather the air as it escapes from those bubbles.

Turbulent water can also cause foam to form in slower moving parts of the river. This is particularly true at this time of year when plant matter from the surrounding woodland has fallen in the water (decaying leaves and twigs act as surfactants, allowing air to mix more readily with water.) I could spend many hours watching the patterns in this foam and trying to figure out how they’ve been formed by the various obstructions and currents in such an ever-changing landscape.

The last few weeks have seen the weather in the Clyde Valley go from virtually non-stop sunshine, to a fairly constant wall of rain. The effect that this has had …