As mentioned in our last blog post,They’re getting ready, badger cubs are making their first staggering steps into their woodland home after being born in their underground sett around eight weeks ago.

Cubs are born blind and helpless, measuring only 12cm in length. They have thin grey-white fur and the stripes of their face mask is just visible. 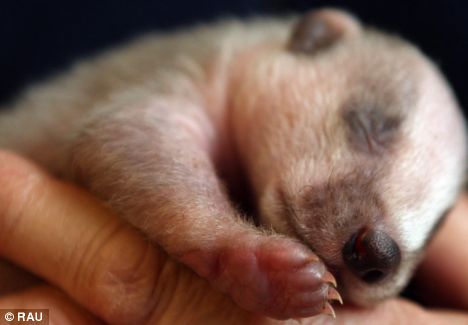 They get their milk teeth at four weeks and their eyes open at five. They might make their first journeys into the great outdoors aged eight weeks, late at night, after the rest of their family have gone out to forage.

Here is one of the Falls of Clyde young badgers wobbling about the sett entrance. Videos © Scottish Wildlife Trust

When the babies reach around 12 weeks, they will go out with the rest of the members of their clan to forage as a family group.

As the cubs get older and bolder, they will spend more time above ground playing, grooming and digging for prey, such as roots and earthworms.

By the time they are 16 weeks old, they will exhibit all adult behaviors. So they have to grow up pretty fast!

The mother and 3 babies go for a wee jaunt. We think that the cubs are now approaching 12 weeks of age. Videos © Scottish Wildlife Trust

As mentioned in our last blog post,They’re getting ready, badger cubs are making their first staggering steps into their woodland home after being born in their underground sett around eight …