This final part of my blog covers another couple of birds that I have enjoyed seeing at the Basin, and a couple of things I would eventually like to see in the future if I have the chance to. Although I wouldn’t be surprised if the things I really want to see end up appearing on one of my days off when I won’t be here to see it. For example, I was really interested in seeing some more birds of prey and on one of my days off, a White-Tailed Sea Eagle flew over the Basin! Hopefully it comes back in the near future though when I’m here to see it.

While probably not a particularly exciting bird to birdwatchers that are more experienced, one that I enjoyed seeing was the Bullfinch.

I had previously seen Chaffinches, Greenfinches and even a Goldfinch or two in the garden, but the Bullfinch is probably my favourite one. There is just something incredibly cute about them, especially their round, dumpy shape and pretty orange-red colouring on their chests, which I find is a nice contrast to the black, white and grey that covers the rest of their bodies. Bullfinches also have a very visible white patch on their rump, just above their tails and it is often this white flash that you spot through the trees first, sometimes even before their vivid chest colouring. Bullfinches usually feed on various seeds and tree buds, and the two that I saw in the garden were hopping around from branch to branch in the trees in front of the window, stripping the buds from the branches as they went. Their constant moving around made it very difficult to get a picture of them though and I spent a good 15 to 20 minutes constantly readjusting the telescope only for the Bullfinches to move as soon as I reached for my phone to take a picture. After much difficulty and cat-and-mouse chasing of the Bullfinches with the telescope, I finally managed to get a decent photo of one of them standing between two branches with a mouthful of green buds, freshly taken from the tree.

Lastly, but definitely not least, one of the Basin’s most popular inhabitants, the Kingfisher.

I was lucky enough to see a female Kingfisher during my first week here. Kingfishers are fairly small birds with quite long bills, which are either fully black if the bird is male, or black but red underneath if female. The female Kingfisher at the Basin is usually seen sitting on top of the appropriately named ‘Kingfisher Perch’, on top of the Sand Martin wall, or in front of the Bank of Scotland hide. Kingfishers are very recognisable birds due to their brightly coloured feathers. Their heads and wings are a greenish-blue colour, warm orange-red feathers cover their fronts and part of their cheeks whilst snowy white feathers are on their throats and patches of their cheeks. Most notably though, is the striking bright blue that runs down their backs and onto their tails, making them very easy to distinguish if seen from the back. Many people come to the Basin hoping to get a glimpse of the Kingfisher. Kingfishers occasionally hover in place as well, however I have only seen our resident Kingfisher do this once and by the time I had gone to get my phone to take a photo of her hovering, she had moved back to sitting on her perch, scanning the water for fish. I was lucky to see the Kingfisher when I did, because she has now moved on for breeding season. 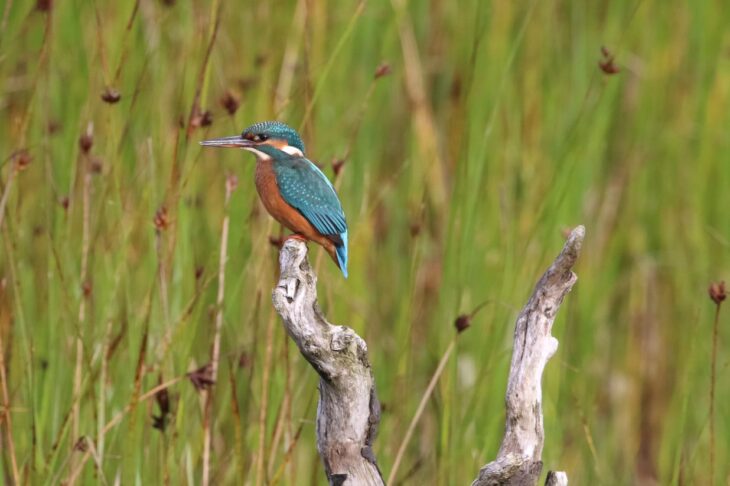 One specific type of bird I would like to see is an owl. I really like owls and I find them to be very interesting birds. Specifically I would like to see a Long-Eared Owl, which may happen in the near future as we have had them at the Basin fairly recently so there is a high chance that one may show up again.

The last thing I would like to see isn’t a bird at all, but a fox. I find foxes to be very beautiful and they’re one of my favourite animals. I have only ever seen a fox once and that was in a big city so it would be amazing seeing one in the wild.

This final part of my blog covers another couple of birds that I have enjoyed seeing at the Basin, and a couple of things I would eventually like to see …