Here at Montrose Basin we’re all about the mud, and rightly so – in which case why on earth am I about to sing the praises of our dipping pond? Well, it has been a fantastic addition to our repertoire since it was created by the then ranger, Karen Spalding, in 2002.

We are only able to safely take groups out on the mud two hours either side of a low tide, restricting us, in effect, to roughly two weeks in each month that school groups can explore the mud. Karen’s idea of a specially constructed / designed dipping pond that groups could use to discover the creatures that live in that environment would give us another option.

The proposal was accepted and Karen received Heritage Lottery Funding to create the pond along with it’s boardwalk and tables – specially designed to take the trays, the clipboard to make notes on finds and of course the identification key sheet.

Once filled up with water, creatures quickly started to colonise it. We added a few aquatic plants and it soon began to look as though it had always been there. Better still – when teachers called to book for their class to visit they were delighted that while half of the class could still go out on the mud the other half could now take part in pond dipping and compare the creatures found in the different habitats, before swapping over.

As well as this advantage, the teachers were no longer restricted to the times when the tide was low to come for their visit. The pond was available for their groups to use at any time, so they could do an outdoor activity learning about the creatures that live in the pond and then after a tour of the Visitor Centre have time to look through the telescopes and binoculars and watch birds such as Sand Martins and Swallows catch insects that were recently living as larvae in our dipping pond!

The pond proved increasingly popular over the next few years with both school groups and organisations such as the Cubs and the Brownies that were able to make use of the Visitor Centre and its facilities on specially booked evenings. We also began to run holiday activities for families, looking for the creatures in the mud, the pond or in the grounds and a number of holiday clubs came along too.

In the Winter of 2006 there was a prolonged cold spell and a group of well-meaning volunteers thought they would help the wildlife by breaking the ice on the pond. However, once the thaw arrived, it soon became clear to us that they had been a bit too vigorous with garden tools when puncturing the ice and had unfortunately punctured the pond liner too! Our then ranger, Neil Mitchell, did his best to save the remaining pond water in buckets which were lined up along the side of the fence and another, stronger pond liner was ordered. The boardwalk had to be taken up so that the new liner could be fitted properly by the team of volunteers which was quite a bit of work and even trickier to replace them in the correct places afterwards!

In Spring 2007 we had our pond back and optimistically returned contents of the buckets in despite not knowing what, if anything, might have survived. Very soon it was recolonised by a wide variety of tiny species for more children to study and enjoy. Since then I have annually placed a float in the pond throughout Winter, so that if it ices over there will always be a little area not frozen, which is much better than breaking up the ice for both the creatures and the liner.

Over the years many young people have enjoyed our dipping pond and been fascinated by seeing a variety of species, including hoglice, beetle larvae, pond skaters, waterboatmen, tadpoles and froglets to name but a few. My personal favourite are the phantom midge larvae, but you’ll just have to take my word that they exist as they are pretty difficult to see in the tray and I have no decent photos of them at all!

We find stonefly and mayfly nymphs which are particular indicators of clean water; which is unsurprising since our dipping pond is purely rainwater, occasionally topped up from the hose if we have a long spell of dry weather (not too often to be honest!).

Last Summer, when I returned from my holidays, I arrived back on my first day and was dismayed to see that the water level was quite low. As I had been abroad I asked if Montrose had enjoyed a sunny spell during the previous weeks, apparently it had been “mixed weather” as ever! So – why was our dipping pond looking somewhat sorry for itself? Well, in the next day or so it became clear that the nine year old pond liner had started to come apart.

We have such a large, man-made pond (11m x 4m) that back in 2006 the most affordable option of liner was one that had two pieces bonded together. After nine years of not just sitting there stopping the water from leaking away, but also taking a battering from many pond nets jabbing at the bottom, it had started to literally come apart at the seams!

So began the most recent task of replacing the pond liner. We were lucky that our current Ranger, Anna Cheshier, managed to get a team of volunteers from British Telecom to help us to remove the mud at the bottom, followed by pulling up the old liner. It was messy, smelly work and we are extremely grateful for the hours that they put in that day, and for the donation that they subsequently sent us.

It was a tough job for Anna preparing the area again, removing and cleaning the boardwalk, measuring and purchasing a suitable replacement liner – which alone cost around £700! Now it is in place we hope to get many happy years of dipping out of our fabulous, newly lined pond.

Why not come along and experience a spot of pond dipping yourself? This Wednesday (13th July) our Wild about the basin event is “Pondamonium!” 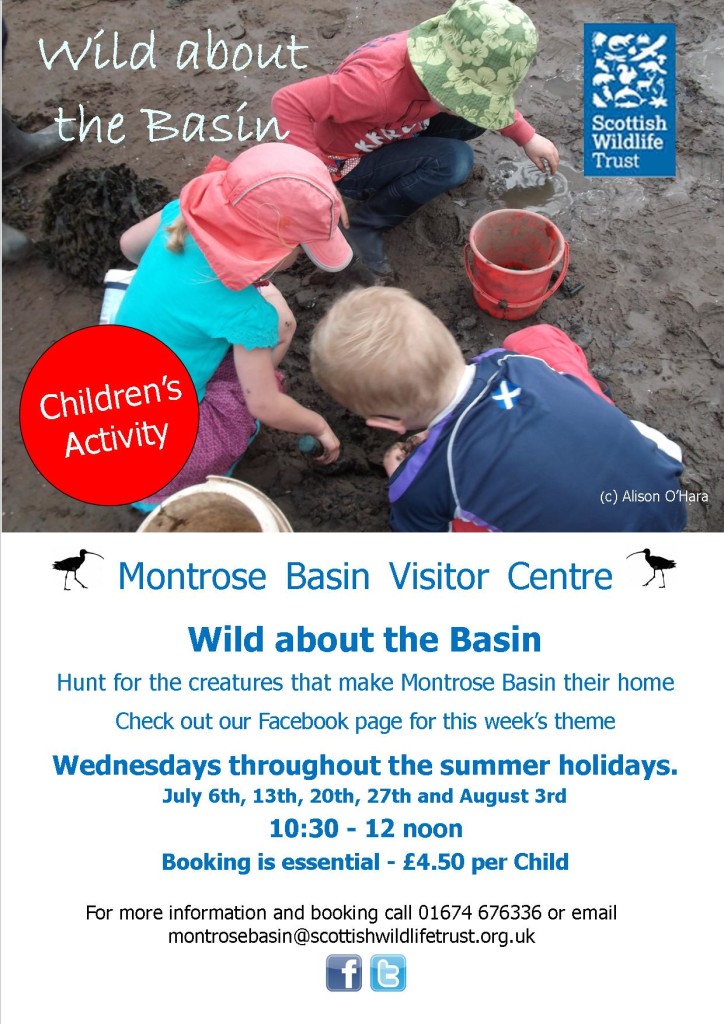 Here at Montrose Basin we’re all about the mud, and rightly so – in which case why on earth am I about to sing the praises of our dipping pond? …