“Hello, can I speak to your ranger please? It’s James from BBC Countryfile…” this was the request one morning in early May when I answered the telephone at Montrose Basin Visitor Centre, and the first that I was aware that the BBC were considering filming in our area.

Over the coming few days our ranger, Anna Cheshier was in high demand on the ‘phone, the researcher had many questions about what sort of Local Nature Reserve we are, what activities take place, whether we might have a “practical opportunity” for their presenter to help us with and so on.

Monday 9th May dawned bright and sunny; the BBC Countryfile researcher and a cameraman visited our Reserve for the first time – they were delighted with everything they saw, the glorious view, the wildlife, the estuary and the welcoming staff and volunteers. They filmed a little at several locations, including our Sandmartin wall and were led on a tour of the area by Anna. They stayed in Montrose overnight and learned more about some of the interesting activities in the town.

The following Thursday, 19th May, by 9am a larger Countryfile team of 5, including presenter Anita Rani, were ready to film. Typical however of the fickle Scottish weather, it was a dull, grey day – actually the first day in May when we had any rain in Montrose! The team all headed out for a morning of filming in the mist, which turned to a thick drizzle as the day went on. Just as well they had some lovely footage of our Sandmartins taken the previous week! Personally, I was happy to be indoors and just supplying teas and coffees between takes and chatting to Anita and the crew, turns out that Anita is a big fan of our traditional Scottish shortie.

In the afternoon Anna and her volunteers were to create a duck nesting tube – the first one on our reserve. Anita had to pull on her wellies, waterproofs and woolly hat again to help with this practical work. We hope that in future Mallard will use the tube of chicken wire and straw to make a nest which will be safe from predators, as these have proven successful on other reserves. This was then mounted on a post which was placed in a pond in front of our Visitor Centre – the sediment at the bottom was rather uneven, and we thought that the water might go over the top of Anita’s boots, but all was well with her – although Anna did return with a wet sock, it was due to a wee hole in her wellie!

We said goodbye to the by now somewhat soggy BBC team and made plans to meet them again the following morning, much to my surprise Anita gave me a big hug and thanked me for looking after her. They headed off to a nearby hotel and then to meet up with our local Coastguard who was bringing them back to the estuary in the evening to take part in a demonstration of a mud rescue, at this point the weather cleared and everyone actually enjoyed a pleasant view of a Montrose Basin sunset.

At 6.30am on the Friday the team met Anna once again for the final piece of filming, when I came in it was already half way through their day. Fortunately it was a more pleasant day weather wise and not so many waterproofs were required. Everyone involved had an early lunch, left us about 1pm and went down to the town to join the other film crew with Matt Baker at the rugby ground before flying back from Aberdeen later in the afternoon. 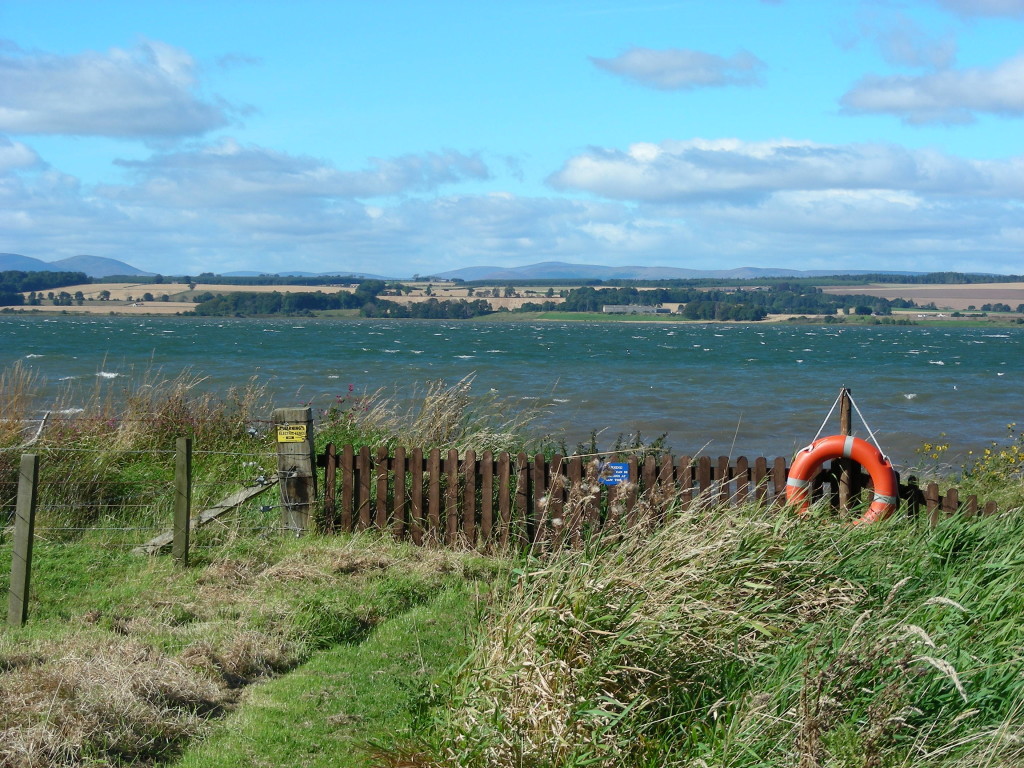 It seems to me that there is quite a lot of waiting around while the camera and sound person do various checks and that filming requires a great deal of patience. I am happy to tell people all about our fantastic nature reserve, but wouldn’t want a director to keep stopping me in mid flow or asking me to repeat the last bit of information in a different way! The researcher, James, told me that he and the crew were envious of our everyday view.  I replied that they must see some great places in their work, but James said that Montrose Basin was “up there” with the best, and I wholeheartedly agree with him on that!

If you missed the BBC Countryfile programme when it aired on Sunday 5th June you can still catch it on BBC iPlayer until 3rd July.

“Hello, can I speak to your ranger please? It’s James from BBC Countryfile…” this was the request one morning in early May when I answered the telephone at Montrose Basin …