It’s not all about the peregrines! My name is Rhian and as this years Seasonal Ranger I am keen to share with you some of the other wildlife that calls the Falls of Clyde home.

So I’m kicking off with this little guy. 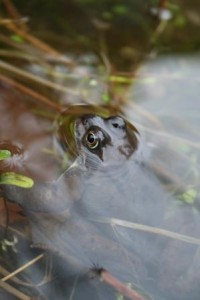 This common frog, photographed by staff member Scott Bland, is one of many who have set up residence in the pond in the Mid- Lodge Tree Nursery at the end of the boardwalk.

They’ve spent winter hibernating in the mud and decaying matter at the bottom of other ponds, where they survive due to their ability to breathe through their skin. The warm weather last week prompted many frogs to head for their favourite pond to breed.

Worldwide populations of amphibians (including frogs, toads, salamanders and newts) are on the decline and nobody really knows why. Theories include a killer fungus, habitat changes and pollution.

Frogs aren’t everybody’s favourite, but don’t forget they eat many bugs we find annoying, like slugs and snails. Also, where would The Muppets be without Kermit?!

It’s not all about the peregrines! My name is Rhian and as this years Seasonal Ranger I am keen to share with you some of the other wildlife that calls …