The UK’s oldest breeding female osprey, a bird which returned for the 21st consecutive year to the Scottish Wildlife Trust’s (SWT) Loch of the Lowes Wildlife Reserve last month, has laid the first egg of its breeding season, it was announced today (Wednesday 13 April). 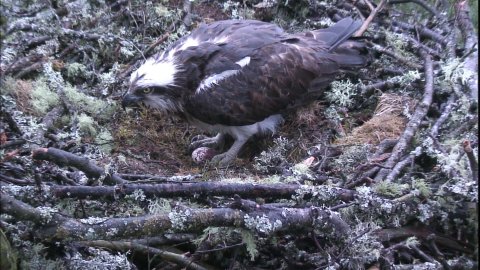 The egg, which is the 59th egg to be laid by this individual osprey in its lifetime, has sparked hopes that this bird, whose fertility is under doubt due to its incredible 26 years of age, could produce its 49th chick on the nest this year.

Spotted protectively hunched over an egg at 13.34 pm by Scottish Wildlife Trust staff, the osprey and its eggs are now the subjects of a 24-hour nest stakeout, funded thanks to SITA Tayside Biodiversity Fund and People’s Postcode Lottery, to keep the birds and their eggs safe from wildlife crime.

Anna Cheshier, the Scottish Wildlife Trust’s Perthshire Ranger, said:  “To see eggs on the nest again is simply remarkable.  Osprey’s live an average of eight years and are estimated to produce 20 eggs during that time.  Producing 59 eggs over 21 consecutive breeding years makes her an incredible specimen of the bird world.

“Ospreys were nearly extinct in the UK in the early 21st century after facing persecution, and the birds and eggs are still at risk from wildlife criminals and egg thieves.  Thanks to funding from SITA Tayside Biodiversity Fund and People’s Postcode Lottery, and help from volunteers, we will watch over these ospreys day and night and hope to see chicks hatch in around five weeks.

“If chicks successfully hatch from the eggs, this osprey will have produced 50 chicks, an incredible contribution to the recovering osprey population breeding in Scotland.  We hope to raise enough money to track these chicks using satellite tags this year, to find out about their inherited migration path and learn useful information which could help protect ospreys during migration.

“Until the eggs hatch, we will watch on as our female osprey incubates the eggs, while her mate occasionally takes a turn during daylight hours. He also has the role of catching fish to feed the pair.”

Wildlife enthusiasts across the globe have also been following the breeding season online thanks to a dedicated blog and nest cam which streams live from www.swt.org.uk.

The Scottish Wildlife Trust has launched a special membership offer to celebrate the return of this incredible female osprey.  Every new supporter who signs up to become a member of the charity during this year’s osprey season will receive an exclusive photograph of the osprey with their membership pack.  New members who sign up over the next week, between Thursday 14 and Wednesday 20 April, will also receive two free tickets allowing them and two guests of their choice to visit Loch of the Lowes for free until 31 August.

The charity will also be running a minibus between Dunkeld and the visitor centre on Saturday 23rd and Sunday 24th April to cope with expectedly high visitor numbers over the Easter weekend.  Visitors are advised that there are limited car parking and toilet facilities at the Loch of the Lowes Visitor Centre.  For more information, visit www.swt.org.uk

The UK’s oldest breeding female osprey, a bird which returned for the 21st consecutive year to the Scottish Wildlife Trust’s (SWT) Loch of the Lowes Wildlife Reserve last month, has …