Resident osprey LM12 has arrived back in Perthshire, marking his tenth season at the Trust’s Loch of the Lowes Wildlife Reserve near Dunkeld. 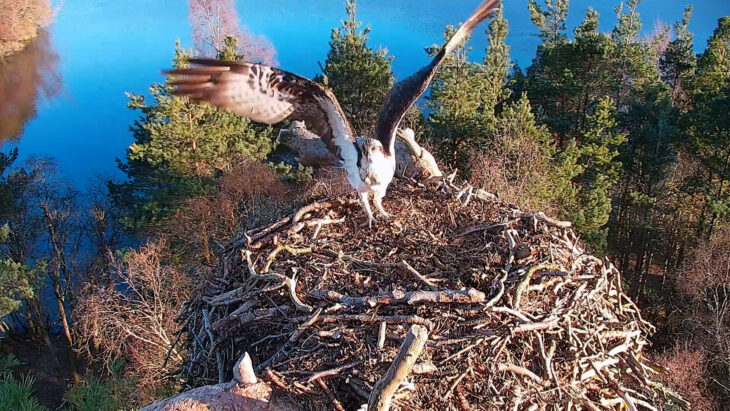 The male bird arrived at the reserve at 5pm on Sunday 21 March at the end of a long migration north. He wasted no time in beginning to arrange the nest, moving sticks and twigs around in preparation for the breeding season.

LM12 first bred at Loch of the Lowes in 2012 and has helped 15 chicks to successfully fledge in that time. In 2020 he paired with female NC0 for the first time and the pair successfully raised one chick.

Our Perthshire Ranger Sara Rasmussen said: “After weeks of preparation we’re thrilled to see LM12 back in Perthshire. As soon he arrived he spent time perching in his favourite haunts and beginning to rearrange the nest – it’s almost as if he’s never been away.

“We’re keeping our fingers crossed that his mate NC0 will appear in the next few days.”

Will Humpington, Advisor for Climate Change & Environment, People’s Postcode Lottery said: “The Scottish Wildlife Trust does a fantastic job protecting ospreys at Loch of the Lowes and helping the public to understand the lives of these amazing birds of prey.

“We’re delighted to hear that another osprey season has begun at the reserve. I look forward to following the nesting season on the Trust’s live webcam.”

Ospreys were extinct in Britain for much of the 20th century. They began to recover in the 1960s and today an estimated 300 pairs breed in the UK each summer. Our osprey Osprey Protection Programme at Loch of the Lowes is supported by the players of People’s Postcode Lottery.

Loch of the Lowes Visitor Centre is currently closed to the public. Watch our live osprey webcam to follow events as they happen.

Resident osprey LM12 has arrived back in Perthshire, marking his tenth season at the Trust’s Loch of the Lowes Wildlife Reserve near Dunkeld. The male bird arrived at the reserve …