The Species Protection Team have been trawling through the osprey data gathered over the years resident male LM12 has bred at the Loch, to reveal the following fascinating insights; from trends in arrival dates, to all things ‘eggy’! Read on to find out more.

Spring 2022 is the 11th breeding season of male osprey LM12 at Loch of the Lowes. Ospreys tend to return to potential summer nesting sites in their third or fourth season – which by our calculations makes LM12 13 or 14 years old, although of course he could be older. Ospreys live on average about 10-15 years in the wild so he’s becoming quite a trooper, and an adorable one at that!

This year LM12 and female NC0 have 3 brand new eggs to watch over – but how many eggs has LM12 fathered over the years, how long on average has it taken between first mating and egg laying, and how long has it taken for them to hatch?

Here is a handy table that answers some common queries – as we take a dive into all things LM12 and eggs! 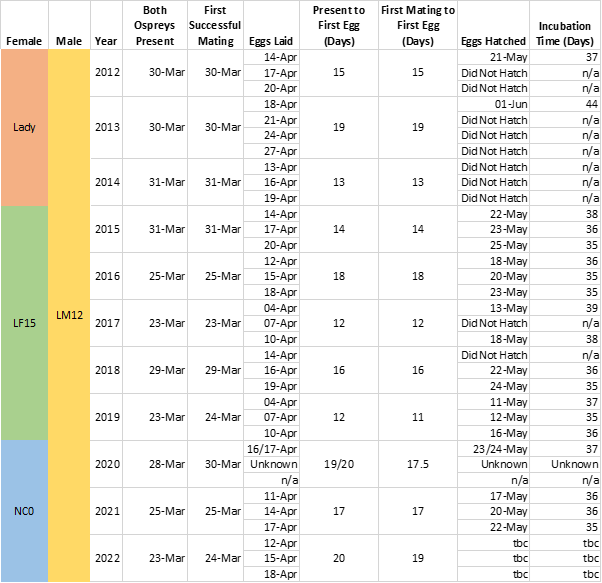 A few important points on the table to mention:

So, what exactly does all this information tell us? Here are some key questions to help us pick the data apart:

How many female partners has LM12 had?

LM12 has had three female partners during his time at Loch of the Lowes.

What dates have both ospreys returned to the nest?

Ospreys are solitary travellers, and almost never arrive on the same day as their mate to summer nests. Here we have noted the first day that both ospreys were present (i.e. the date the second osprey arrived). The earliest that both ospreys have been present in LM12’s time was in 2017 and 2022 on the 23rd March, the latest was in 2014 on the 31st March.

It’s interesting to note that over LM12’s 11 years this date has, on average, been getting earlier in the year. This follows a larger pattern we have already observed (in the 1970s and 80s ospreys arrived as late as mid-April to early-May). This is likely because of changing weather patterns due to the effects of climate change.

How many eggs have been laid during LM12’s time at Loch of the Lowes?

How long does it take on average for the first egg to be laid?

After both ospreys have returned to the nest it has taken on average just under 16 days for the first egg to be laid. The shortest time was 12 days in 2017 and 2019. The longest was in 2020 when it took either 19 or 20 days (egg laying not observed precisely due to the Covid-19 pandemic), and most recently this year in 2022 when it took 20 days.

Of the three partners LM12 has had, egg laying after first mating has taken the longest with NC0, averaging just under 18 days. In contrast Lady and LF15 took an average of 16 and 14 days respectively, though it is biologically possible for osprey to lay 10 days after the first successful mating!

How long has it taken for eggs to hatch after laying?

The average incubation time for eggs laid is 36.6 days. As said, this is based upon the premise that the first egg laid is the first to hatch, unless records tell us otherwise.

It should be noted that this does not take into account the second egg in 2020, which was not observed hatching due to Covid-19. Additionally the average might a little lower, mainly because we do not know which egg hatched in 2012 and 2013. The incubation time in 2013 is particularly longer, so it may be that it was the second, third or fourth egg that hatched, not the first. This would bring the average incubation figure down slightly.

How many eggs on average hatch successfully?

10 eggs have not hatched – 8 of Lady’s and 2 of LF15s. Long-time observers of Loch of the Lowes ospreys will know that during Lady’s 24 years here she laid an incredible record breaking 73 eggs, 50 of which hatched and survived to fledgling. The years with LM12 were her final years when her fertility lessened.

Apart from this, and setting aside this year’s 3 eggs (which we are waiting on with baited breath!) a total of 20 eggs have hatched successfully during LM12s years at Loch of the Lowes. 2 with Lady, 13 with LF15, and 5 with NC0.

Of course, it must be noted that not all eggs that hatch produce chicks which successfully fledge the nest. Watch this space for an upcoming blog by Seasonal Protection Officer Charlotte, who will take us through Lowes’s successful juveniles over the years, and where they have ended up!

In the meantime it’s fantastic to celebrate all the eggs LM12 has helped produce over the years – may there be many more!

The Species Protection Team have been trawling through the osprey data gathered over the years resident male LM12 has bred at the Loch, to reveal the following fascinating insights; from …