During Scotland’s Year of Stories, the Scottish Wildlife Trust is publishing a series of first-hand accounts from people who have faced barriers connecting to nature.

In this account, Ruth Hunter reveals how, during a hospital stay, connecting to nature through the Loch of the Lowes osprey webcam proved key to her mental and physical recovery. 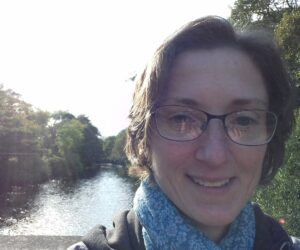 In March 2021 I was admitted to hospital, where the doctors and nursing staff saved my life. I was given a private room with one frosted window which offered no connection to the outside world. Owing to Covid restrictions, no visitors were allowed. Staff came to my room with medication and meals.

In my real, healthy, life I spend a lot of my time outside absorbing the life of the plants and wildlife all around me. To be wrenched from the natural world to this clinical room physically hurt.

A kind friend suggested the Loch of the Lowes Osprey Webcam as a way of bringing the outside in. I connected to the webcam in the week the osprey eggs were laid. It became my morning routine to put on the webcam, turn up the volume and share with the parent osprey the sounds of the forest, the sunlight glinting off the loch and the patient wait for the eggs to hatch.

Staff who previously had no interest in the natural world were drawn into the fate of the osprey eggs, staying to watch the adult birds and listen to the sounds of the forest and loch. Some (in fact most) of them had never seen, or really known about, an osprey before. It was a chance for me to feel human and share my knowledge with them.

There was excitement on the ward when the eggs finally hatched. By then, I was allowed to get out of bed in a wheelchair and I could share the sights and sounds of the osprey with the other patients on the ward. With the volume up to maximum on my tablet, at times the sound of screeching birds would echo down the corridor. When people questioned the noise, the response was, “Oh, it’s just Ruth’s osprey” – the whole ward could now identify the call!

As they began to stretch their wings and gradually ready themselves to fledge, I was stretching my own legs out of the wheelchair, able to walk around the ward.

It was awesome to watch the chicks being fed, how quickly they grew and their plumage mature. As they began to stretch their wings and gradually ready themselves to fledge, I was stretching my own legs out of the wheelchair, able to walk around the ward.

The week they flew and left the nest was a happy moment. And yet this time watching them practise flying and learning to fish for themselves was tinged with melancholy, too. I still had more rehabilitation to do in hospital and they flew south before I was ready to go home. But the thought that kept me going was that one day I will be free to see ospreys in real life – be it at Loch of the Lowes or perhaps even in west Africa!

This blog is adapted from an article originally published in Scottish Wildlife magazine in November 2021.

During Scotland’s Year of Stories, the Scottish Wildlife Trust is publishing a series of first-hand accounts from people who have faced barriers connecting to nature. In this account, Ruth Hunter …