We have now been living on Handa for over four months, which is challenging to comprehend.

In some ways, a third of a year seems like a very long time, and yet some part of me feels as though we’ve always lived here. What began as six strangers congregating on an island now feels like a solid and settled family unit. It is therefore very hard to imagine that in a couple of weeks we will all be heading off in different directions to each start on a new venture.

We had the exciting task of conducting a whole-island guillemot count this season, which involved counting from both the clifftops and from a boat! Despite the weather being too rough for us to complete our circumnavigation of the island, our data still showed a slight increase in numbers, and so we are pleased to report that Handa is home to a population of at least 56,557 guillemots (up from 54,664 in 2016). Next year it’s the turn of the razorbills, and we are hoping for a similar positive trend.

The puffin population has also risen this year. At our ‘Peak Season Puffin Count’ (which took place in the hours before sunset in mid-July) we recorded over 1,000 individuals, which is slightly more than last year’s count of 817. The puffins had an increased dose of fame this year when a leucistic puffin was spotted – a sighting that made national news! We saw it a few times, which was a great excitement for everyone, and we really hope that he decides to come back next season and delight future rangers with its presence.

The kittiwakes and fulmars are the only birds remaining on the cliffs, as the auks have all ‘bred and fled’. Kittiwake monitoring has been ongoing since May, and so we’ve seen the progression of nest-building, to egg-laying, and finally chick-raising. Most of these chicks are at fledging stage, and so have gone from being fuzzy little ping pong balls to fully-grown aviators with a snazzy black triangular outline on their wings. Unfortunately for the kittiwakes now that the other birds have gone they are particularly exposed to predators, particularly bonxies.   We often experience ‘summer snow’ on the clifftops, where thousands of little white feathers poignantly swirl around on the thermals.

The fulmar chicks are still in full-fluff, and will not leave the cliffs until later in September. When they fledge, they will weigh more than the adults, having been filled up with regurgitated fish oil from their parents. Not only is this oil highly nutritious, but it also acts as a predator deterrent: fulmar chicks will spew this foul-smelling grease onto any bird that gets too close, and a bird whose feathers are coated in oil will be unable to do anything until it’s preened itself back to cleanliness. 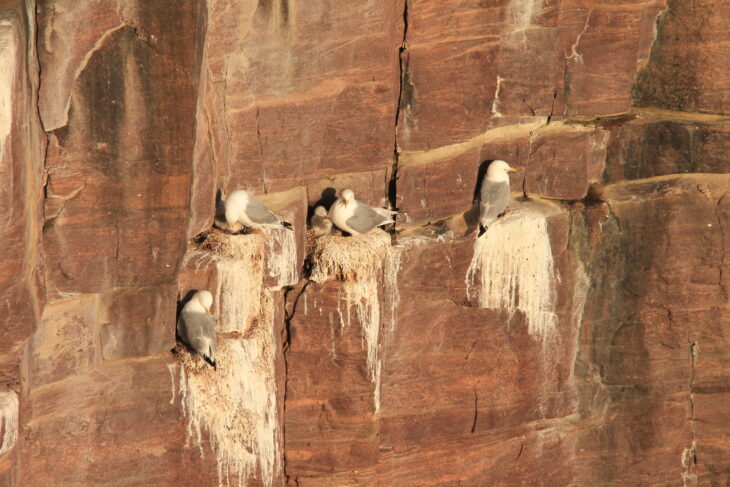 Excluding the fish oil spraying, I recognise parallels between ourselves and the seabirds, which is perhaps why I feel their absence so acutely. Just as the guillemots arrived in small clusters in April, so too each of us made our own journeys to the island. After several months of living and working together, the six individuals have become a single, strong unit. When on the island, guillemots are often arranged in family groups, since females will return to the same ledge on which they hatched.Once the chicks become ‘jumplings’ they go from being packed in hundreds on the cliff ledges to being solitary birds on the sea. In a few weeks’ time, we will all be dispersing to different parts of the mainland.

Living on an island like Handa, which is completely uninhabited except by the ranger team from March to September, has given us all a renewed sense of wonder for the natural world.

We have been able to see a whole habitat change from being brown and snow-covered at the end of winter, to suddenly fringed with limey buds and shoots, and then covered in a whole spectrum of colour as the flowers burst open throughout summer. We have witnessed the arrival of the seabirds; heard the guillemots gargling and the rasping of razorbills; seen the cliffs packed with wings; smelled the tang of guano. We have been at the complete mercy of the elements, as our day-to-day life is dependent on the weather. High winds or too much rain means we are confined to the bothy.

Living in such an isolated place has also highlighted how many modern amenities are simply not required to lead a pleasant and fulfilling life. As long as you have drinking water, food, a way of generating heat and a comfortable bed to sleep in, everything else is a true bonus. It goes without saying that living in such a lovely group of like-minded people makes the whole experience all the more fantastic.

We have now been living on Handa for over four months, which is challenging to comprehend. In some ways, a third of a year seems like a very long time, …

How nature-based solutions can help to tackle biodiversity loss