I am still fortunate enough to be working as the seasonal wildlife ranger on Eigg, as I live permanently here on the island.

Although, like everyone, I’m working under some restrictions, there is still plenty to do with wildlife surveys and data collection. While we may not have any human visitors, there have been plenty of arrivals from nature! April has brought an explosion of colour and sounds to Eigg as spring arrived with two weeks of glorious sunshine. Excitingly, we have had not one, not two, but three “first sightings on Eigg” to celebrate! 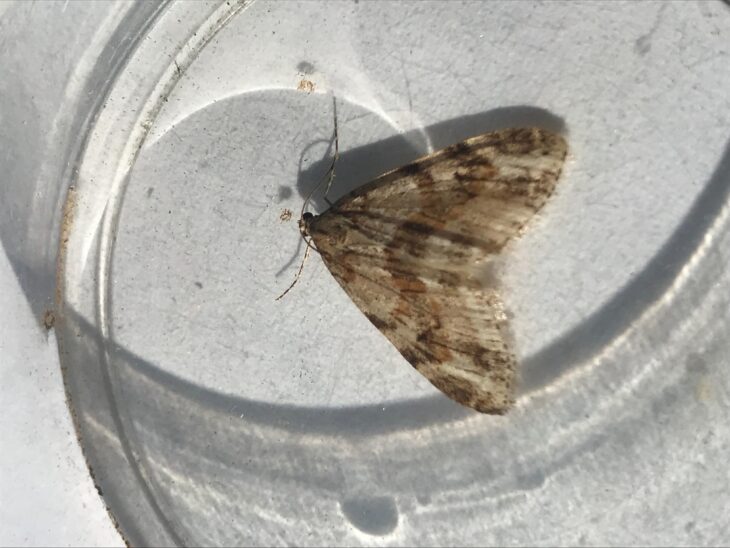 The good weather prompted us to do some early spring moth traps and we were very pleased to find out last week that we had discovered a new species for Eigg – the barred tooth-striped moth. This moth is usually found in England, but is increasingly being found further north.

Another exciting first for Eigg, is the appearance of a nuthatch in the garden of John Chester (our long standing ex-warden) at the weekend (Sat 25 April). This distinctive little woodland bird moves up and down tree trunks head-first in search of food. I was disappointed not to be able to see it at John’s but then, to my delight, the very next day it appeared at our bird feeder!

Finally, we’ve seen what is a common bird on the mainland, but a stranger to Lochaber and the Isles – the magpie! One bird briefly appeared on Sat 2 May, having also been spotted on Rum and Canna earlier on in the week – another first! According to the Machrihanish Bird Observatory monthly report there have been several sightings of magpies throughout Argyll and Mull this last month, outwith their usual range.

April has brought an explosion of colour and sounds to Eigg as spring arrived with two weeks of glorious sunshine.

The first swallows arrived on 10 April and cuckoos were heard on 16 April, nearly a week earlier than last year. The woodlands are now full of visitor birds singing including willow warblers, chiff-chaffs and blackcaps, to name but a few. Spring flowers are everywhere and an otter has made a couple of appearances at the pier. It is great to know that at least nature is still on the move!

I am still fortunate enough to be working as the seasonal wildlife ranger on Eigg, as I live permanently here on the island. Although, like everyone, I’m working under some …