This week our ospreys have been conspicuously absent from the nest. We’ve had some understandably concerned viewers write in to us with their questions, so we thought we’d answer some of these here.

1. Have the ospreys abandoned the nest?

It looks increasingly likely. Visits to the nest by the resident pair are still happening but these incidents are becoming less frequent.

2. Do we think the birds have been scared off?

We can’t be certain but again, it’s possible. An incident on Saturday 11 April, where shouting was heard over the webcam’s microphone might have spooked the ospreys, but it’s equally possible that they would have made this apparent shift away from the nest anyway.

Ospreys are very susceptible to human disturbance and, as a Schedule 1 listed species in the UK, it’s illegal to disturb nesting ospreys under the Wildlife & Countryside Act 1981. As with any human disturbance to the nest, we immediately reported last weekend’s incident to the Police Wildlife Crime Liaison Officer.

3. Is it possible the mating has been unsuccessful?

A lot of mating could be seen on the nest between the 30 March and 11 April that we believe was successful.

As a young bird, NC0 should be suitably fertile, but given that we have never seen her breed before we can’t be certain of this. Some of the behaviour that we’ve been observing in her since she arrived at the nest suggests that she is an inexperienced female. For example, when an intruding osprey invaded their space last week, NC0 responded by lying flat in the nest in the same way that a juvenile would, rather than making herself look bigger and standing her ground. That said, we have also seen her in the last couple of days defending the nest and actively pursuing another female.

Of course, we know that LM12 has been successful in the past, but as he is now around 11 years old, it’s possible that his fertility is lower than in previous years.

4. There has been no sign of eggs yet, is NCO holding back until she is fed more regularly?

We know from our data over the last 50 years and in particular since the webcam went up in 2004 that the time between first mating and first egg can vary greatly. Even LF15, who we felt was very consistent, had big variations. At the time of writing (17/04/20) it had been 19 days since we saw the first successful mating attempt between NC0 and LM12. 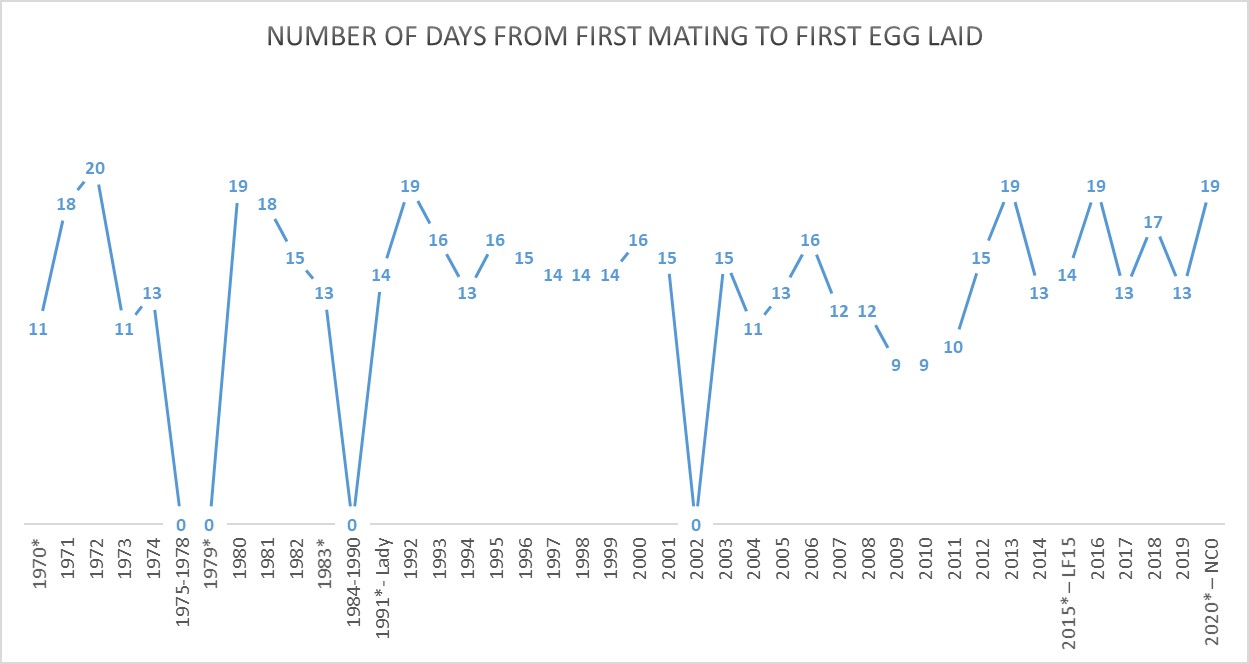 5. Do you think they have decided to nest elsewhere?

Unfortunately, given the current lock-down situation, our options for establishing this are very limited. Given that the birds are still occasionally appearing on the webcam, it would be reasonable to assume that they may have chosen to nest somewhere in the area.

As a wildlife conservation charity, it should come as no surprise that our main objective is to provide a safe haven for wildlife, and the ospreys are no exception. The reserve itself does a lot of the work for us, providing nesting sites, fresh fish and a quiet environment. One of our responsibilities as guardians of the reserve is to prevent people from disturbing the wildlife present, which is particularly important for ospreys given their sensitivity to human activity.

To give our ospreys the best chance at a successful season, please continue to observe government advice and do not travel to Loch of the Lowes. Having had three weeks with no human interaction whatsoever, our birds could be much more susceptible to disturbance than in previous seasons.

We understand that the possibility of not being able to watch this season’s nest-side antics will be very disappointing for people, but nature will be nature and we have every confidence that given the chance, wildlife will flourish in this landscape absent of people for a short time. We sincerely hope that our ospreys will have a successful season wherever they are, and we will of course update you on any further developments.

This week our ospreys have been conspicuously absent from the nest. We’ve had some understandably concerned viewers write in to us with their questions, so we thought we’d answer …