In the eager anticipation of LM12 and LF15 returning to Loch of the Lowes we have been reflecting on the findings from last year’s breeding season.

2019 was a successful year for our ospreys here at Loch of the Lowes, with two chicks successfully fledging the nest. LF15 laid three eggs and all three hatched but unfortunately the youngest chick died at ten days old.

The season began with the arrival of the breeding male (LM12) on the 15th of March. The breeding female (LF15) arrived shortly afterwards on the 23rd of March. Osprey Watch started soon after. The team consisted of the Perthshire Ranger and four Species Protection Officers (SPO’s), alongside many Osprey Watch volunteers.

This year was the first-time tablets had been used to record osprey behaviour and disturbances rather than handwritten notes. This was intended to simplify the process of data by the night shift SPO’s who checked the data inputted against the camera footage to ensure accuracy.

Below is a table showing the timeline of events for the 2019 breeding season: 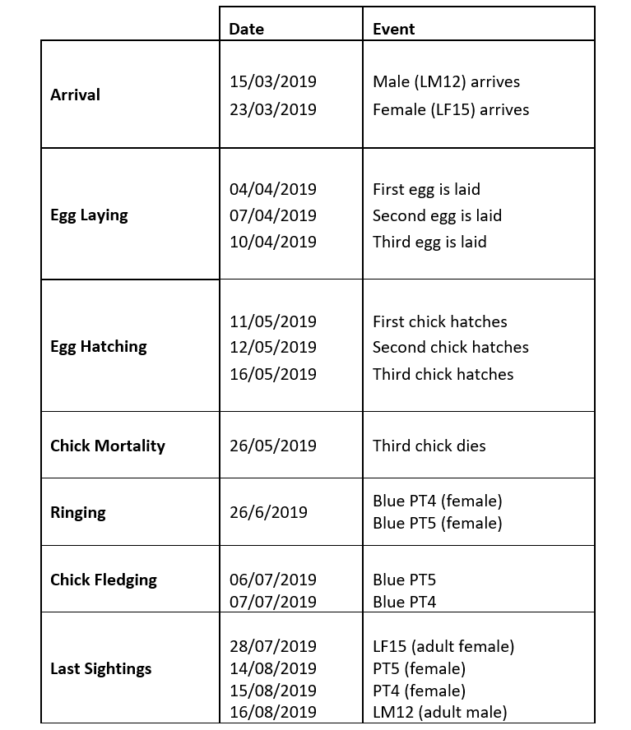 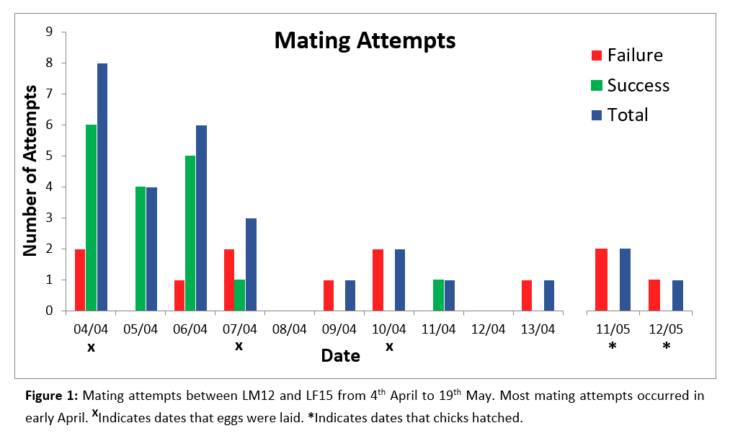 Incubation changeovers between LM12 and LF15 were recorded and the time between changeovers was calculated. This allowed for a calculation of total time each adult osprey spent incubating per day. If the eggs were left un-incubated for more than ten minutes, this was recorded as ‘exposed’. Exposure events that lasted less than 10 minutes were not recorded in the dataset.

This dataset started on April 5th, when the first egg was laid. Egg incubation was considered to be over on May 15th when the third egg began to hatch. On average, LF15 incubated for 81.7% of the time and LM12 incubated for 17.3% of the time (Fig. 2). The eggs were left exposed for 1.1% of the total time period. 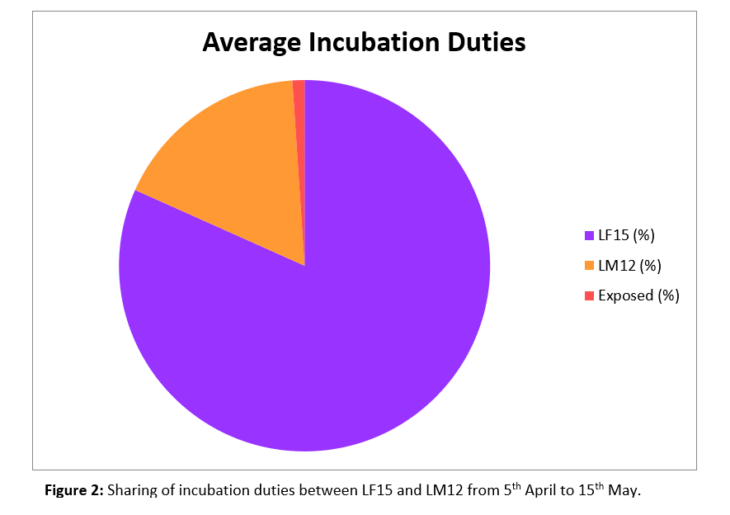 LF15 carried out most of the incubation duties. From April 5th to May 2nd, LM12 incubated consistently (ranging from ~18-40%, Fig. 3). After this point, LM12 spends less time incubating. There are several days when he does not incubate at all.

Six exposure events were noted over the incubation time period. These ranged from 10 minutes to 2 hours and 20 minutes. 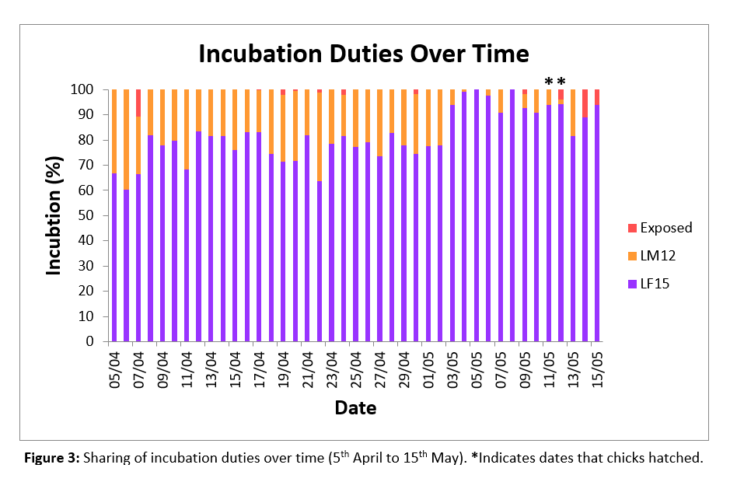 Fish deliveries were recorded consistently from the 4th April to the 19th of May. Any records kept before and after Osprey Watch were not included in the dataset. Only fish that were delivered to the nest were recorded; on some occasions LM12 ate a catch without delivering it, so these incidents were not included. Care was taken not to double count fish that were passed between the male and female a couple of times. This was especially common once the chicks had hatched.

Whenever possible, fish species was identified from the hide, either as LM12 ate the catch on a visible perch or as he delivered it to the nest. Fish ID was verified when reviewing footage on night shift. If the species could not be identified with reasonable certainty, the fish was recorded as ‘species unknown’.

In total, 80 fish were delivered to the nest over the 45 day period. This ranged from 0 to 4 fish delivered per day with an average of 1.7 per day (Fig. 4). All fish were delivered by the male. There were four days with no fish deliveries: 3 May, 5 May, 6 May and 8 May. The reduction of fish deliveries over this time is likely due to stress caused by intruder ospreys. There was an increase in intruder events and LM12 was seen very little over this time. We believe that the stress caused from these intruder events led to a change in LM12’s behaviour and once the frequency of intruding ospreys decreased again he resumed his normal behaviour patterns. 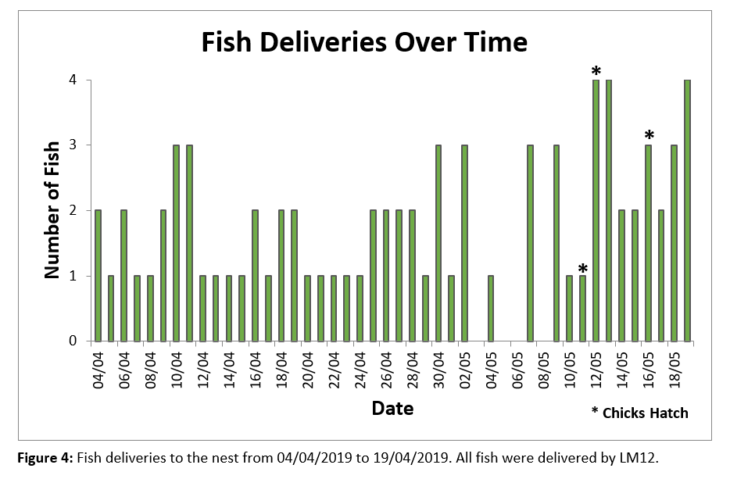 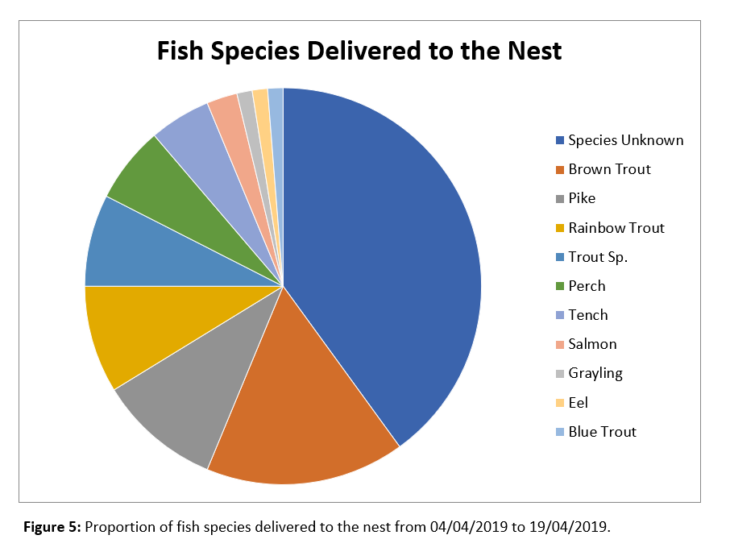 Over the season there was a variety of intruders around the nest but the majority were intruding ospreys, with 118 sightings in total. Other intruder species recorded included buzzards, red kites, carrion crows and other corvids, grey herons, lapwings and red squirrels. In general, 0-7 intruder ospreys were recorded each day (Fig. 6). The exception to this was one occasion on May 4th with 27 recorded incidents of intruder ospreys. Most intruder events involved one or two ospreys but, on this occasion, there were up to 6 intruding ospreys around the nest at once. On May 5th, 11 intruder incidents were recorded but after this the frequency of intruders decreased to 0-6 per day. 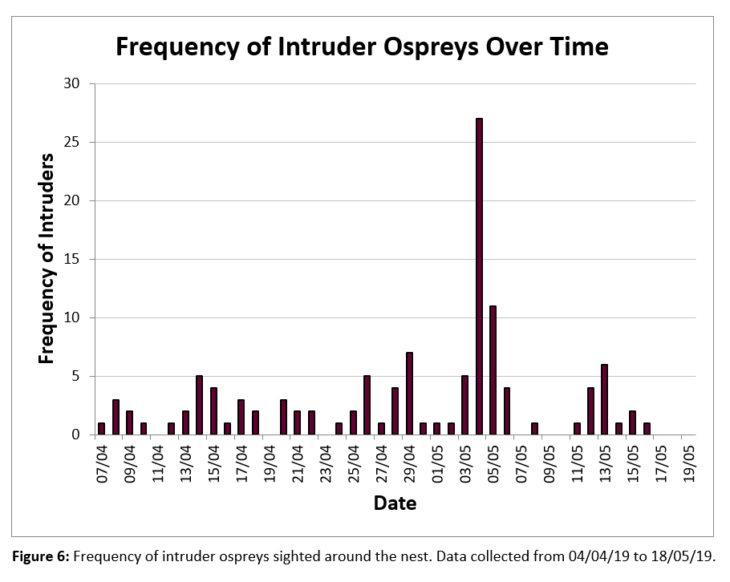 We see different trends in the types of behavioural responses LF15 and LM12 display. Alarm calling was recorded 75 times this year, with a fairly even split between the pair (Fig. 7). Intruders were chased 65 times in total; 35 of these incidents were intruder ospreys. LM12 chased intruders more frequently than LF15. Mantling was recorded 33 times with LF15 displaying this behaviour more frequently than LM12. 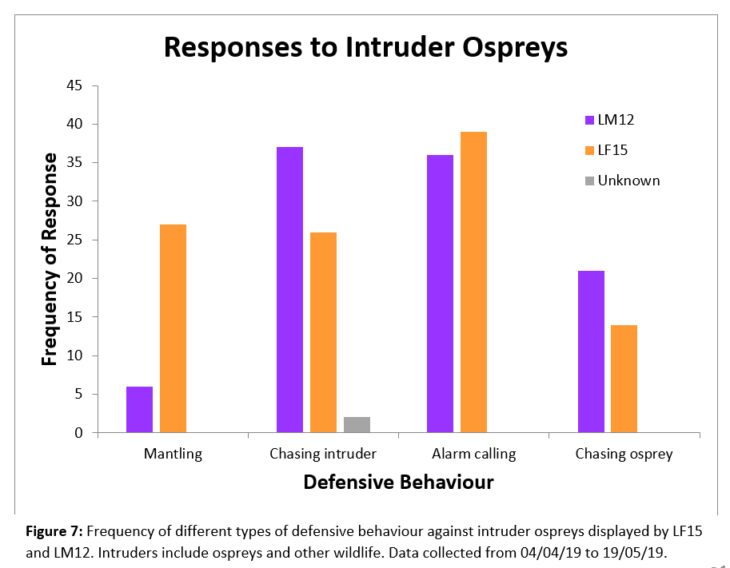 Over the summer there were a few other notable events which occurred on the loch.

• PH1: On May 4th, an intruder osprey with a blue leg ring was spotted around the nest. The ring number was identified from the hide as PH1. This individual was LF15 and LM12’s offspring from 2017, a male from a brood of two. PH1 landed on the nest briefly then left.

• FF7: This individual with a blue leg ring was spotted on May 13th. This was identified as a female bird from a 2014 nest in Perthshire. The brood of three was ringed by Keith Brockie.

• Y6: This individual was spotted on May 15th and made several attempts to land on the nest. This female osprey was from a 2016 nest in Kielder Forest, Northumberland. She was ringed (blue ring) by Martin Davison and was the youngest of a brood of three.

Overall it was a successful and eventful year here at Loch of the Lowes and we look forward to what will hopefully be another good year to follow.

In the eager anticipation of LM12 and LF15 returning to Loch of the Lowes we have been reflecting on the findings from last year’s breeding season. 2019 was a successful …