The festive period drew to a close with one big noticeable difference this year. The Scottish Budget was not published in December as we have come to expect.

Finance Secretary Derek Mackay has now indicated that the draft budget will be published on 6 February, however this delay has not prevented some frank discussion about public spending on Scotland’s environment.

Scottish Environment LINK has highlighted the steep declines in funding for our environment agencies and environmental research over the last decade.

This has led some to attribute the decline to austerity as a result of the UK Government’s massive fiscal tightening (largely through government spending cuts) following the 2008 global financial crisis.

While UK Government austerity might explain some of the trends in spending on the environment in Scotland, it is possible to dig deeper and look at the impact of Scottish Government decisions on spending priorities. This can be done by considering how environment spending as a share of total spending has changed over time.

A key part of environment spending set out in the Scottish Budget is that on Environment, Climate Change and Land Reform (ECCLR). This covers spending on: 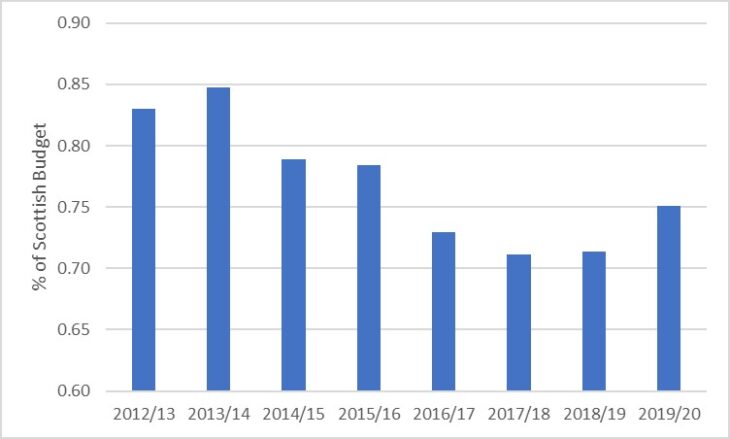 ECCLR spending as a share of total Scottish Government Budget has fallen between 2012/13 and 2019/20 (Scottish Government). This chart excludes the budget for Scottish Water, which is highly volatile from year to year and distorts the picture.Although ECCLR spending is a very small proportion (less than 1%) of overall spending in Scotland the sums of money involved are still significant. For example, if the ECCLR Budget (excluding Scottish Water) had been maintained as a share of Scottish Government spending over the period shown in the chart then it would have been nearly £50m higher in 2019/20. Similarly, the money allocated to SNH would have been nearly £30m higher.

Such trends seem at odds with the prominence given to the climate emergency by the Scottish Government,  and even more so when it is considered that the First Minister has stressed that “Biodiversity loss and the climate crisis are intimately bound together: nature plays a key role in defining and regulating our climate and climate is key in shaping the state of nature.”

There could be a silver lining to the delay in the Scottish Budget if we see a reversal of trends in environmental spending, and a budget that can genuinely be billed as one that addresses the climate and biodiversity crises.

The situation is made even starker when you consider that the independent UK Committee on Climate Change said in its 2019 Progress Report to the Scottish Parliament that “Scotland must match the ambition of its world-leading Net Zero 2045 target with decisive action to strengthen climate change policy in all parts of the economy.” They were also clear in highlighting that decisions over the course of the next year “are likely to determine the direction of the next 25 years”.

There could be a silver lining to the delay in the Scottish Budget if we see a reversal of trends in environmental spending, and a budget that can genuinely be billed as one that addresses the climate and biodiversity crises.

In particular, the forthcoming budget will need to ensure that the updated Climate Change Plan (expected at the end of April) is suitably resourced to meet these twin challenges. This must include appropriate funding that allows natural climate solutions to form the linchpin of the new plan.

The festive period drew to a close with one big noticeable difference this year. The Scottish Budget was not published in December as we have come to expect. Finance Secretary …