This week saw the publication of a new global assessment of nature from the independent Intergovernmental Science-Policy Platform on Biodiversity and Ecosystem Services (IPBES).

Put together by more than 550 leading experts from over 100 countries, the report is a sobering assessment of the dramatic decline in species over the past 50 years. It highlights the critical life support system provided by biodiversity to humans and concludes that nature is stretched almost to breaking point.

The message is simple: we need to act now before it’s too late.

It’s worth pausing to consider just a few of the striking statistics contained in the assessment, illustrating nature’s unprecedented decline:

What also comes across loud and clear is the rapid increase and scale of human activity across the globe that impacts on our environment:

To make matters worse, we are spending public money in a way that is adding to these problems rather than solving them. According to the report, every year $100 billion of agricultural financial support in countries within the Organisation for Economic Cooperation and Development (OECD) is spent in ways that are potentially harmful to the environment. In addition, global fossil fuel subsidies amounting to $345 billion result in $5 trillion in overall costs – including the damage to the environment.

At the same time, the consequences of a massive increase in economic activity, combined with government policies that fail to take into account the environmental damage they cause, are unfortunately becoming all too apparent. For instance:

If we do not reverse nature’s decline, then we may no longer be able to depend on nature to keep sustaining life as we know it. For example, IPBES highlight that more than 75% of global food crops rely on animals for pollination, 70% of cancer drugs are natural or synthetic products inspired by nature and 4 billion people rely primarily on natural medicines.

It is not too late to make a difference

Taken together, all of these statistics make stark reading.

However, they also represent the most urgent call to action to save nature that we have ever seen. The Chair of IPBES, Sir Robert Watson, is clear that it is not too late to make a difference, but only if we start acting now and at local to global levels.

What does this mean for Scotland?

What we urgently need is a joined-up approach across all aspects of public policy but with a particular focus on land use, including agriculture and urban development, as well as a holistic approach to our marine and freshwater systems.

This includes promoting a Land Stewardship approach to land management and reforming agricultural subsidies to support investment in our natural environment. The emphasis should be on good land stewardship practices that provide more habitat for wildlife, reduce soil erosion and greatly lessen the amount of pollution that ends up in our streams and rivers.

By thinking about fisheries as part of whole ecosystems, ensuring that Marine Protected Areas are properly managed and helping people understand the value of our oceans, we can ensure that our marine biodiversity is able to thrive.

Meanwhile, in our towns and cities, we need to make our green spaces as important as our ‘grey’ spaces, and across Scotland we need to see Scottish Government honour its commitment to create networks for nature that are truly connected. 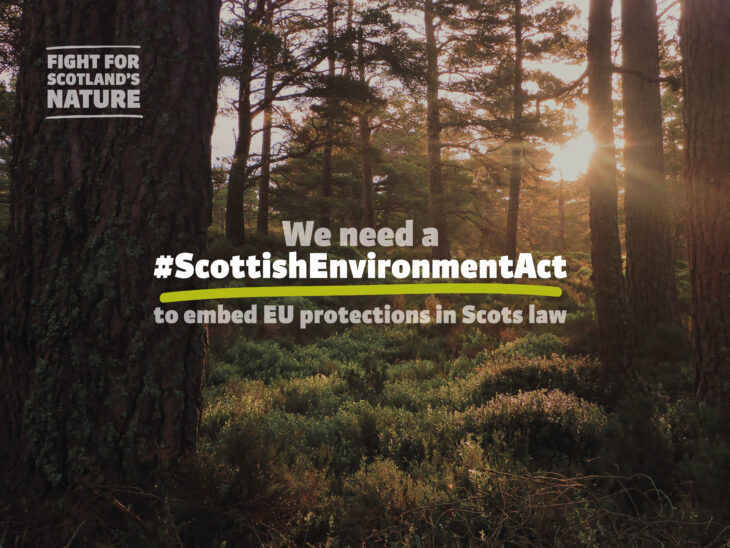 You can make a difference

One in 11 species in Scotland is at risk of extinction and progress on 13 of the 20 Aichi targets is assessed as insufficient. If everyone lived as we do in Scotland, we would need three planets to sustain ourselves. We really need everyone to act now.

We must go further if we are to respond to IBPES’s wake-up call. Everyone, from individual citizens to the Scottish Government, must take the decisive actions this assessment highlights.

It is well known what needs to be done in Scotland, but implementation and delivery will speak louder than words.

Help support this aim by joining the 17,000 people who have already signed up to the Fight For Scotland’s Nature campaign. You can get involved by writing to the First Minister by 11 May 2019.

This week saw the publication of a new global assessment of nature from the independent Intergovernmental Science-Policy Platform on Biodiversity and Ecosystem Services (IPBES). Put together by more than 550 …