The past week has been particularly exciting for our resident osprey pair here at Lowes. All three eggs have hatched, with the first and second chicks emerging on the 11th and 12th of May respectively and the third a little while later on the 16th. This is a very exciting time at the Loch, with several fish deliveries and chick feedings taking place each day. The chicks seem to be growing larger every day!

Over the past few weeks, LM12 and LF15 have experienced a large number of intruding ospreys approaching the nest. One day featured six intruder ospreys in the air at once! LM12 and LF15 have had to work hard to protect their nest and their eggs.

However, among all of the drama we had very exciting news, in the form of a familiar bird! 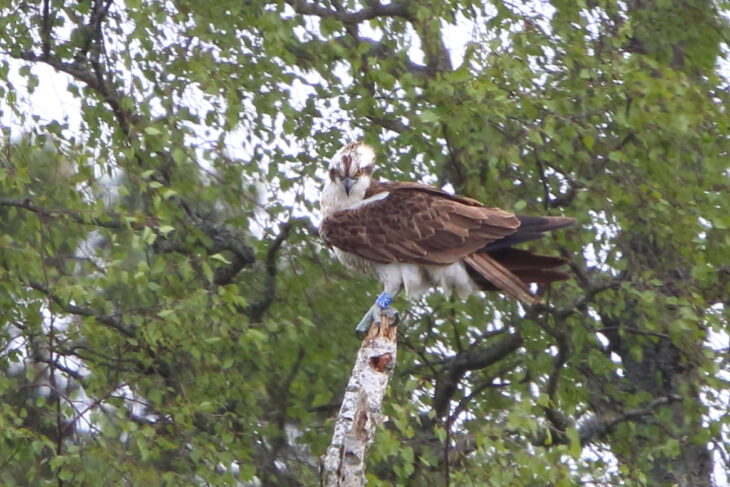 With LM12 absent on the 4th of May (see our previous blog), several intruders were flying around the Loch and one happened to land on the nest. The intruder had a leg ring and from the hide the ring number was identified as PH1. The ‘intruder’ was in fact LF15 and LM12’s son from two years ago! 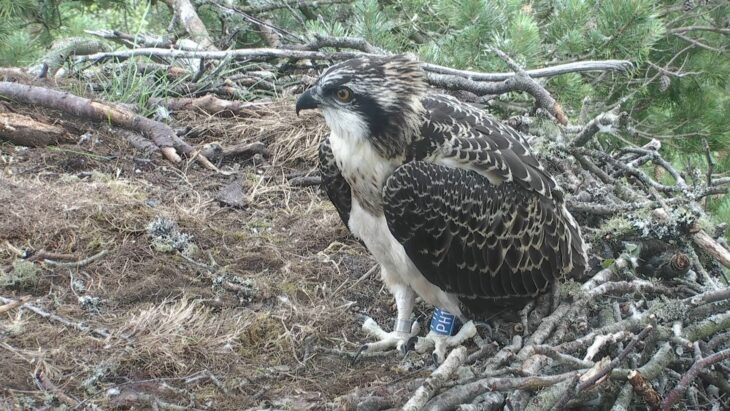 PH1 on the Lowes nest in 2017, pre-fledging © Scottish Wildlife Trust

This is particularly exciting news at a time when things have been a little more stressful than usual for our resident pair. Despite all the things that might have gone wrong, both during the breeding season and the juvenile’s first long migration south, LM12 and LF15’s offspring has been able to return to Scotland to breed. The pair are attentive parents and it is reassuring to see that all their efforts during the 2017 breeding season paid off! 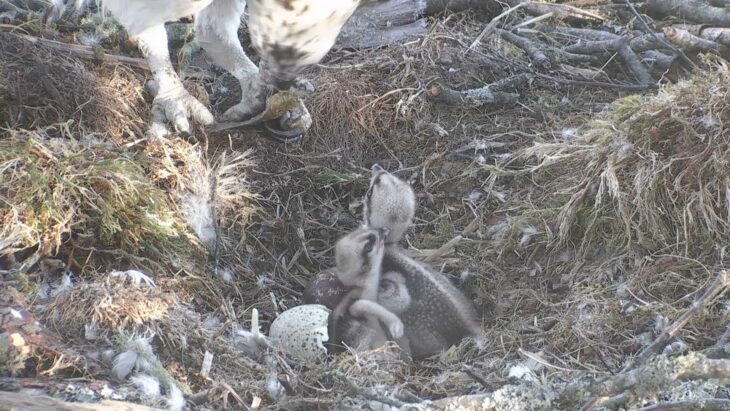 Newly hatched PH1 alongside his older sister, PH2, on the Lowes nest in 2017 © Scottish Wildlife Trust

PH1 hatched on the 18th of May 2017, on the very same nest where LF15 is currently incubating. Two chicks hatched in that year and both were ringed on the 16th of June. The older chick (PH2) was female while the younger (PH1) was male. PH1 fledged on the 9th of July and was last seen at Lowes on the 18th of August 2017.

As well as PH1, a couple of ringed ospreys have been spotted by staff, volunteers and visitors at Lowes over the past few weeks. On the 13th of May an osprey with a blue ring on its left leg reading “FF7” was seen near the nest.

It turns out that this female is originally from a nest in Perthshire, just a few miles from Loch of the Lowes. She was part of a brood of three and was ringed by Keith Brockie on the 15th of July 2014. One of the other siblings in the brood was spotted in Somerset in March this year.

On the 15th of May, another intruder made several attempts to land on the nest. The blue ring on its right leg read “Y6”. It turns out that this female osprey was born at a nest in Kielder Forest, Northumberland, in 2016 – one of the few sites in England with breeding ospreys. This was the youngest chick of a brood of three and was ringed on the 6th of July 2016 by Martin Davison.

She has been seen overwintering in The Gambia but this is the first sighting of her in the UK since her fledging. Her appearance at the Lowes nest suggests that she is ready to breed and may be “prospecting”; attempting to take over a nest as her own. However, LF15 and LM12 defended their nest well and after about 10 minutes Y6 moved on.

Juvenile ospreys stay in their wintering grounds in Africa or Southern Europe in their first year. In their second or third year, they will return to breeding grounds in the UK. It is rare that a two-year-old osprey will breed but they will try to find a nest site and a mate.

Young ospreys quite regularly return to the nest where they were raised. This is referred to as ‘natal philopatry’ and is more common in males than females. This behaviour isn’t always restricted to young birds however, as in 2008 a yellow-ringed male osprey showed up at the Loch of the Lowes nest and briefly mated with the resident female. The new suitor in question turned out to be the thirteen-year-old offspring of Lady, the breeding female at the time, although he was quickly sent packing when the resident male returned.

An osprey’s third year is the most common time for young birds to begin breeding, although this will depend on their success in finding a suitable mate and nesting site. So, while ospreys reach sexual maturity at 2 years old, they are more likely to breed in the proceeding years after this. At three years old Y6 is old enough to breed and is likely trying to find a nesting site and a mate.

The challenging but successful fight for the nest at Loch of the Lowes is a testament to the bond between LM12 and LF15. Not only do they undertake a strenuous migration from West Africa, they have to endure many intruding ospreys seeking to take over their nest in Scotland while they incubate their eggs and raise their chicks.

Things don’t always turn out well for the resident ospreys of a nest. A pair of nesting ospreys at a Scottish Wildlife Trust reserve in Angus were recently ousted by intruders; it appears that the male was chased away by an intruder, while the female left the nest after a new male attempted to mate with her.

Once the nest was abandoned, the eggs were lost to predation by crows. The female is still in the area but it is likely she will be too late to breed this year. It is always sad to see the failure of a breeding attempt by any native wildlife, but it is important to remember that this is the course of the natural world and a positive sign of increasing osprey numbers in the UK.

While it may be tempting to take sides and vilify the intruders harassing the Lowes and other breeding pairs, we must remember that these ospreys are simply trying to establish their own nests and raise chicks of their own. Seeing PH1, FF7 and Y6 at Lowes is a great sign that ospreys in the UK are successfully raising chicks that are able to return to breed years later. We wish these birds the best of luck – hopefully they will have long and fruitful lives raising chicks of their own!

The past week has been particularly exciting for our resident osprey pair here at Lowes. All three eggs have hatched, with the first and second chicks emerging on the 11th …