Perthshire is known as Big Tree Country and the mixed woodland bordering Loch of the Lowes is rich with magnificent examples of mature silver birch, oak and Scots Pine.
Scots Pine is one of only three conifers native to the UK and has been growing in the Northern Hemisphere for about 200 million years. It is an Evergreen of the genus Pinus, in the family Pinaceae, and they retain their needles throughout the year, producing seeds in cones which are then dispersed by wind or animals.

Scots Pine are known for their deeply textured bark which gleams a rich, red/purple on the upper portions of mature specimens. You may have had a ‘baby’ Scots Pine as a Christmas tree in your house, if so, you’ll appreciate its nose tingling fresh scent of pine.
There were hundreds of thousands of Scots Pine trees in the Caledonian Forest. Just imagine the intense, heady perfume which would have wafted up from those dense forests!

Scots Pine can reach 100ft/30m in height and live an average of 300 years, with some specimens reaching double that age. Their strong upper branches provide perfect nest sites and in the early summer of 1969, a Scots Pine on the banks of Loch of the Lowes caught the interest of a passing osprey. At that time, there were only four other osprey breeding sites in Scotland making it all the more wonderful when he began building a nest and attracted a mate to join him.

For the next 50 years, ospreys have returned to nest at Loch of the Lowes, choosing a succession of four different Scots Pines to build nests and attempt to raise their broods. Winter is harsh here, bringing devastating storms and plummeting temperatures which can freeze the loch for weeks on end. During ferocious storms some of these nesting trees suffered damage or were blown down.

In the late 1980s, after a punishing winter, Scottish Wildlife Trust volunteers climbed 80ft/25m up into the top branches of a Scots Pine. Built using a wire tattie basket for a cup surrounded by a lattice web of non high tensile thick fence wire to which branches were wired created a nice flexible system which has lasted well. It was hugely rewarding when the returning pair of osprey took up residence. This tree, the tallest Scots Pine on the strip of woodland between Loch of the Lowes and Craiglush Loch, is the same one you see the ospreys nesting in today.

In 2004, Scottish Wildlife Trust streamed a live webcam from the tree giving a close up view into the osprey nest. The iconic view from the stately Scots Pine attracted over 1.3 million during one season. The tree stands proud in its natural Perthshire setting, with fallow deer grazing on Deuchary Hill in the background and surrounded by forests, lochs and constantly changing Scottish weather.

The Scots Pine is, in itself, a fertile habitat for wildlife but we have seen several species visiting the nest. There have been crows, redstart, great spotted woodpecker and heron, with blue tit, great tit (who pulled insulation from the camera’s microphone for nest material!) nesting in the base. Captured on our night cam, a tawny owl sat within inches of the female while she incubated eggs: dozing, eyes shut. The owl’s noiseless flight did not wake her, it was only when it flew away that she leapt to her feet, spread her wings and stared out into the dark. Perhaps it caused a movement in the air or in the twigs beneath her feet?

A cheeky red squirrel tried three times to peek into the nest before deciding the lower branches were safer than facing the talons and sharp beak of such a large raptor.

Tree of the Year

For being a stunning example of a Scots Pine and the incredible conservation story unfolding from its branches, in 2014 it was voted Tree of the Year in the Woodland Trust’s public vote. In 2014 the female osprey in residence, affectionately known as Lady, had been returning for 24 incredible years. Poignantly, 2014 was to be ‘Lady’s’ last summer at Lowes. However, this magnificent tree cradling the nest and the success of the return of ospreys to Scotland continues to this day. 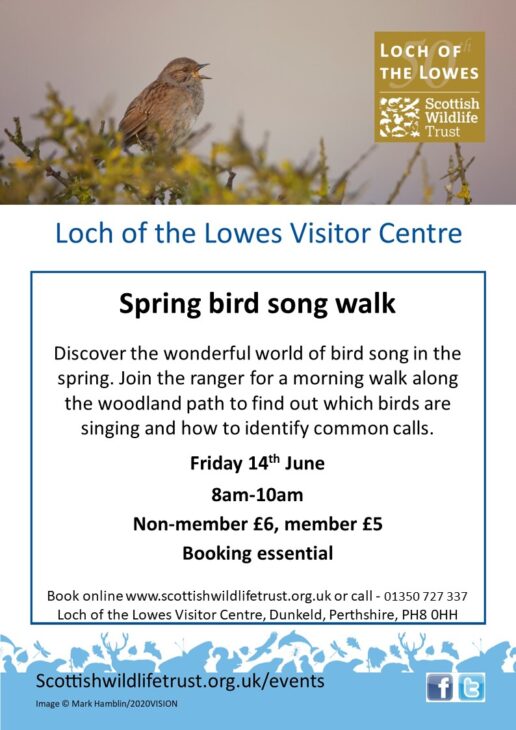 Perthshire is known as Big Tree Country and the mixed woodland bordering Loch of the Lowes is rich with magnificent examples of mature silver birch, oak and Scots Pine. Scots …