I have a vivid memory of the first time I walked the dunes, heaths and wetlands of Coul Links. It was early evening in the springtime of 1993 on a wild stretch of east Sutherland coast just north of the village of Embo.

I remember a cacophony of bird song and insects whirring and buzzing – almost loud enough to drown out the sound of the sea. I couldn’t remember ever hearing such an uproarious natural clamour.

I ended up falling in love with Coul and making it my home for four years as a summer warden for the Scottish Wildlife Trust, staying on for two winters as an unpaid volunteer in the elegantly dilapidated Coul Farm Cottage.

I spent many a night being kept awake by curlews, oystercatchers, common sandpipers and redshanks. I spent the days giving guided walks and recording birds, mammals, butterflies and the unique plant communities growing in the dune-slack wetlands which flood during the winter months then explode into flower in the spring and summer. Frog orchid, coralroot orchid, rue-leaved saxifrage, purple milk vetch and moonwort are just some of the special plants you will encounter on a walk across the dunes.

It was at Coul, heading out one day to see how the breeding little terns were getting on, that I encountered my first Scottish wildcat. The cat and I eyeballed each other from only a few metres before she walked away sedately into some nearby juniper bushes. Coul Links is the kind of place where such wildlife encounters could happen to anyone. It’s a genuinely special place.

It is also a strictly protected place – or so we imagined. Despite having three nature protection designations at Scottish, European and international level, the site is currently threatened by a proposed golf development. The fate of Coul Links hangs in the balance with today seeing the start of a four week public inquiry which could have implications not just for Coul, but for protected areas across Scotland.

Eleven years ago I gave evidence at a public inquiry which had remarkable parallels with this case. At the time, Donald Trump promised to “improve” the environment of a Site of Special Scientific Interest by building a golf course on the dunes of Menie Links, just north of Aberdeen. A decade later and history is repeating with similar, scientifically unsupportable claims being made by the charismatic American developers Mike Keiser and Todd Warnock. 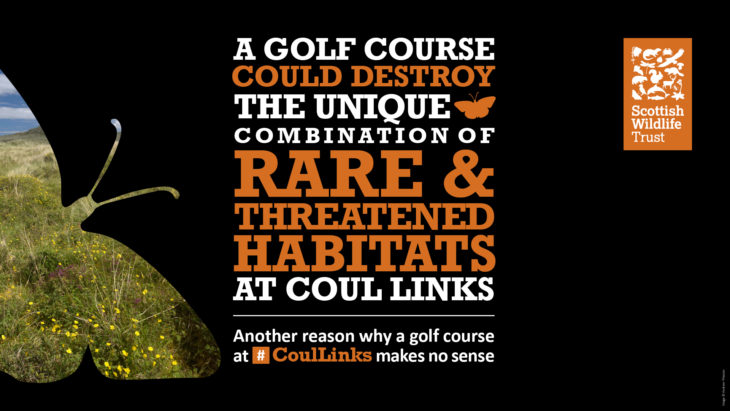 We know these claims are groundless because local and national experts, an unprecedented coalition of conservation organisations, and the government’s own advisory body, Scottish Natural Heritage have lodged hundreds of pages of detailed ecological evidence as proof.

In his topic paper for the inquiry, Stewart Angus of SNH concludes that “the final layout involves the imposition of a high impact design on a sensitive and highly valued protected habitat” and the “overall integrity of the SSSI would be compromised by the proposal”.

Highland Council planning officers also recommended refusal of the application because it clearly contravened their own policies, only to have their advice ignored by local councillors on the planning committee.

There is a lot at stake in the next four weeks. The potential loss of one of our finest stretches of remaining wild coast, the local extinction of a number of rare species, the future status of protected sites in Scotland post-Brexit, and even the very integrity of the planning system itself.

This article first appeared in The Scotsman on 5 March 2019

I have a vivid memory of the first time I walked the dunes, heaths and wetlands of Coul Links. It was early evening in the springtime of 1993 on a …