Although it is still winter, it will soon be time to begin monitoring a variety of bird populations, few more iconic than the Black Grouse.

Highland Perthshire is a stronghold for the birds who despite suffering national declines and being a UK red list species, have bounced back and appear to be holding on in the region, thanks in part to a programme of native tree planting.

The Perthshire Black Grouse Study group have been monitoring the local population since 1990, helping to increase understanding of the species, build a long-term data set and contribute to conservation management plans for Black Grouse.

There can be no mistaking the characteristic lekking of the males in the Spring; a testosterone fueled duel-like dance between males, desperate to establish their dominance and impress the demure females watching from the wings.

Bubbling noises drift over the moors rising into a series of pops sounding more like an 80’s well known coffee advert than a bird. Striking red ‘eyebrows’ known as wattles and a lyre shaped tail, fanned out with an underskirt of white complete the spectacle.

Leks can attract up to 30 individuals at any one time.  It is the perfect opportunity to count the birds and get and sense of how well the population is faring from year to year. From a low of around 260 birds in 2002, the males have recovered to 579 individuals in the study group area.

The Perthshire Black Grouse Study Group is keen to encourage new members to get involved in monitoring the population. Come along to Loch of the Lowes on the evening of Thursday 24th January for a talk by Claire Smith of RSPB Scotland, to learn more about one of Scotland’s most charismatic species and find out how you can help to play a part in their future. 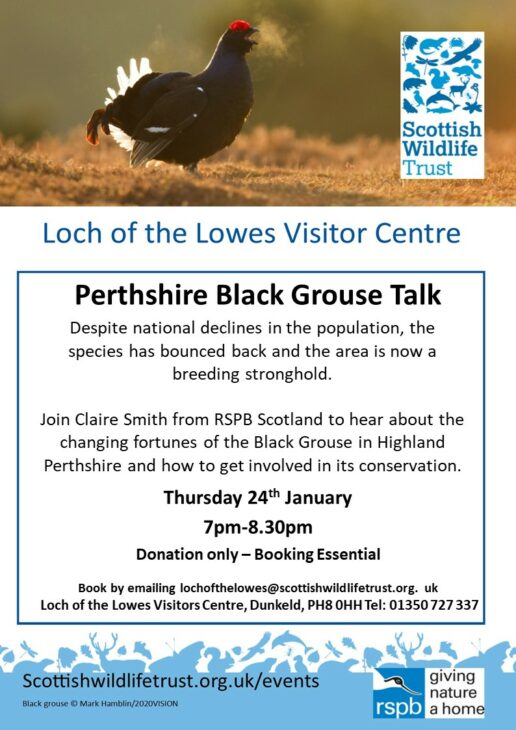 Although it is still winter, it will soon be time to begin monitoring a variety of bird populations, few more iconic than the Black Grouse. Highland Perthshire is a stronghold …