The Scottish Wildlife Trust, along with our partners the Royal Zoological Society for Scotland (RZSS), has been at the heart of the reintroduction of beavers to Scotland in Knapdale for over a decade.

As the licenced Scottish Beaver Trial was being carried out a separate population of beavers emerged in Tayside, either from accidental escapes from wild animal collections or illegal releases. The presence of these beavers, their rise in numbers and lack of management triggered a lot of debate about whether steps should be taken to remove them.

That debate was effectively ended when the Cabinet Secretary for the Environment – Roseanna Cunningham MSP – made the welcome announcement at the end of 2016 that beavers could remain in Scotland and would be allowed to disperse naturally from both Tayside and the original trial site at Knapdale.

It’s been clear for some time that beavers in Tayside have been doing well and are expanding their range. To get a better handle on their numbers Scottish Natural Heritage (SNH) commissioned some survey work and the long-awaited results have finally been published in the Survey of the Tayside area beaver population 2017-2018.

The Trust welcomes this report and we are delighted that beavers have continued to expand their range in the Tay catchment since the first survey in 2012.

What does the report tell us?

By mapping field signs of beaver activity it’s possible to show that beaver territories have increased over time from 40 to 114 and the total population has risen in size from around 150 to around 433 beavers. Whilst this is a remarkable increase it is far below exaggerated claims of around 1500 animals that came from some in the farming community.

It’s also important to remember that compared to many of the European countries where beaver have already been reintroduced these numbers are very small. There are around 10,000 in France, 15,000 in Germany and 80,000 in Norway

The report highlights that as beaver numbers increase they are – just as we had hoped – naturally dispersing into other catchments. There are now a small number of beaver territories within the Forth catchment from Loch Achray in the Trossachs, parts of the River Teith and Devon, to the main stem of the River Forth near Stirling, almost in sight of the Wallace Monument.

The study also recorded and assessed the management impact of beavers. A total of 159 management issues were recorded and these were categorised either as low impact (small scale tree felling), medium or high impact (flooding of large areas of important food crops). These higher impacts will take more imagination and resources to mitigate. Overall the impacts are very localised in nature and can be dealt with by deploying, low cost, management techniques – such as dam notching, water flow devices, tree guards and fencing. 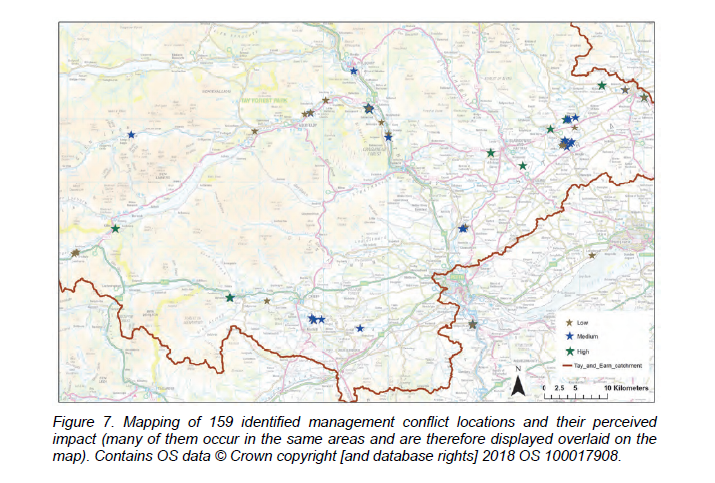 Worryingly, the report highlights areas where beavers were once present in Tayside but are now absent. This is mainly due to culling by land managers. Until such time that beavers receive protected status in Scotland this unregulated culling will continue to limit the return of beavers and leads to some concerns for animal welfare. 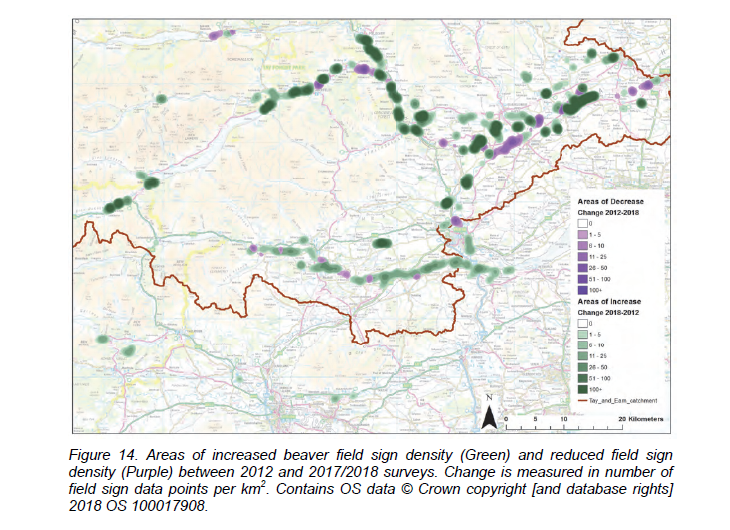 What needs to happen now?

Unfortunately progress in protecting beavers has been too slow and has not matched the pace of their expanding range and numbers. The Trust is therefore urging the Scottish Government to prioritise completing the necessary steps to secure beavers the legal protected species status that it promised nearly two years ago.

Legal protection would ensure that killing beavers would only be permitted under licence in situations where there are high impacts and where alternative management approaches have failed. To ensure animal welfare standards are met only authorised people should be allowed to carry out control.

The appearance of beavers in the Forth shows that is only a matter of time before they are found more widely. Farmers, foresters and other land managers can prepare for their return by re-establishing or improving narrow strips (approximately 20m wide) of woodland habitat along rivers.

These riparian strips would create a buffer between the beavers preferred habitat and their land management activities. Steps can also be taken to protect essential trees, crops or infrastructure. Forward thinking land managers could also consider allowing small areas of land to be given over to beaver wetland habitats that will in turn encourage a wide range of biodiversity.

The return of beavers to Scotland is something to be celebrated and has had a catalytic effect with further projects now being established in the rest of Great Britain. As a keystone species – one which modifies its own habitat – beavers create dead wood, revitalise riparian woodland strips along river banks and create wetland habitats that can support a much richer diversity of wildlife.

Beavers help to regulate water flows and dilute the pollution that comes from some agricultural and forestry practices. They also contribute to the local economy by providing new wildlife watching experiences. Let’s hope their legal protection is secured swiftly now so that the population continues to expand.

The Scottish Wildlife Trust, along with our partners the Royal Zoological Society for Scotland (RZSS), has been at the heart of the reintroduction of beavers to Scotland in Knapdale for …