Juvenile osprey PT0 has now not been seen by staff since Monday morning (around 10:30am), and it is believed that he (or she!) has left for migration. There was therefore a 10 day gap between LN1 and PT0 leaving Loch of the Lowes, though they both left within the usual time frame for young ospreys.

In the final few days before PT0 left, we saw that the juvenile had surpassed the size of LM12, which has made many of us at the visitor centre believe that PT0 is actually female. It’s difficult to know the sex of the birds until they return to breed themselves, but there are a few indicators. Females are usually larger, which is why we are questioning PT0’s sex, and often have a darker breast band.

She certainly made her presence known in the last week or so, calling very persistently for fish and behaving defensively on the nest. She has been quite the character throughout the osprey season, and we hope to see her around in a few years time. 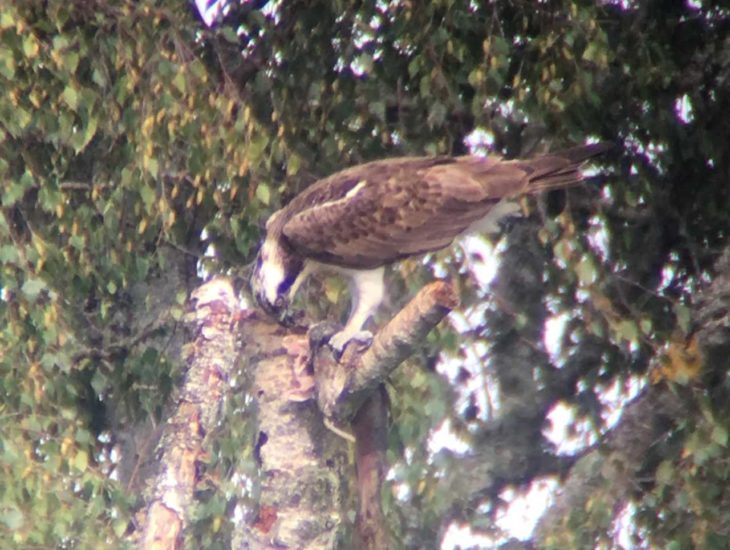 LM12 is still around, having been seen eating a large fish on the birch perch on Wednesday afternoon, though it is only a matter of time until he will leave also. Male ospreys usually stay until their offspring have left, making sure that they have fish and are learning to fish for themselves. Now that both chicks have left, his job is done for another season.

We cannot guarantee being able to see ospreys anymore to visitors, though we still recommend a visit. The red squirrels are still regular visitors to the feeding station, as well as the nuthatch and great spotted woodpeckers. The great-crested grebe chicks are also doing very well and can be seen often on the loch.

We will keep you up to speed with any further updates.

Juvenile osprey PT0 has now not been seen by staff since Monday morning (around 10:30am), and it is believed that he (or she!) has left for migration. There was therefore …

Loch of the Lowes, Migration, Ospreys