Birds are typically known for their flying abilities, but there are a few that draw attention by their ability to climb up or down trees. We get 3 species at Loch of the Lowes that can do this: nuthatches, treecreepers, and great spotted woodpeckers. Although some people are lucky enough to see nuthatches regularly, they are a rare sight at Loch of the Lowes, so we are very pleased to see them here recently. We also regularly catch glimpses of the local treecreepers, though they do their best to disguise themselves. As many of you will know, great spotted woodpeckers are often seen at the feeding station, and we have at least two juveniles visiting at the moment. So what are the differences between these birds, and how do they negotiate the trees so well?

Firstly, there is a big difference in size and colouration of their plumage. Treecreepers have a relatively small body, but with their tail measure around 12.5cm in length. They are highly camouflaged with a mottled brown plumage, becoming noticeable by their white underside. Nuthatches, however, are larger (around 14cm in length) and have quite bright plumage. They have blue-grey feathers on their topside, and a pale orange underneath, which is darker in the males. They also have a distinctive black eye mask which extends from their long, pointed bill to the start of their wing. Great spotted woodpeckers are larger than both of the others, measuring around 22cm in length. They are characterised by their white breast and black feathers, with patches of white on their back. Their red underside is an identifying feature, along with the red nape signifying the males, and a red crown for the juveniles.

Although they can be seen fairly often in much of Britain, it is only recently that nuthatches have spread more north and can be seen further up in Scotland. Treecreepers are also relatively widespread, and seen regularly at Loch of the Lowes. They are found mostly in deciduous and mixed woodland, meaning that the treecreepers are less common in the Highlands, as most deciduous woodland in Scotland is at altitudes below 300m. This results in the populations of treecreepers being dynamic, consistent with the woodland in Scotland.

Both treecreepers and nuthatches are passerines (characterised by 3 forward-pointing and 1 backwards-pointing toes). Their sharp claws allow them to grip to the tree, but each have characterised movements. Treecreepers are able to walk (or creep!) up the tree, but are unable to go down head first, meaning that they will usually fly when they reach the top of the tree. They will often move in spirals around the tree, giving them away as you get a chance to spot their white breast! What is interesting about treecreepers is their very stiff tail which makes up a large proportion of their body length. They use the tail as additional support for climbing the tree, but it gets in the way for being able to come back down. Treecreepers have very sharp, curved and slender claws, ideal for gripping to the tree. Nuthatches do not have the same tail feature, with a much shorter tail and bigger body instead. They can move down the tree head first, but can also go upwards too. As they don’t have the tail for support, they rely on very strong feet and claws, while moving in a series of jumps, rather than sneaking up the tree like a treecreeper. Great spotted woodpeckers are different again. They also use their strong tail for support, but they are able to move up and down the tree thanks to the arrangement of their toes. They are not passerine like the others, and rather have two toes at the front and two at the back, with one being able to rotate. This gives them the grip and strength they need to be able to attach themselves and move up and down the trees with ease. 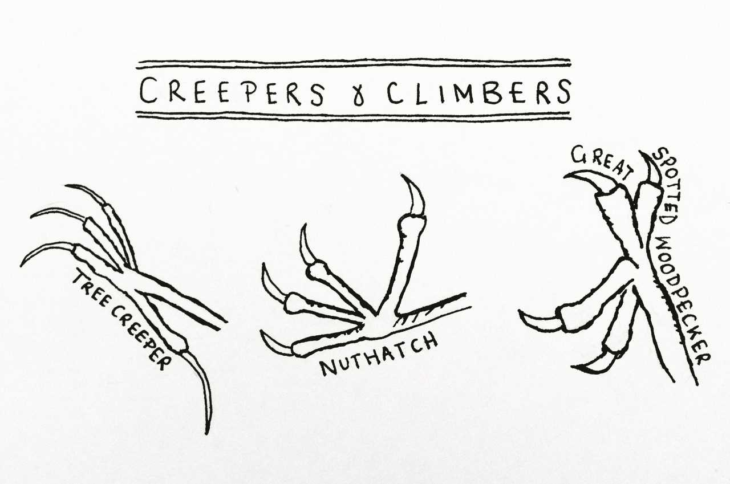 We’ve had many visitors come along so far determined to spot the nuthatch, so why not join them and try and see if you can spot all three of our special creepers and climbers!

With thanks to and for more information about these birds:

Birds are typically known for their flying abilities, but there are a few that draw attention by their ability to climb up or down trees. We get 3 species at …