With about two weeks to go until the hatching, as estimated by one of our SPOs, the Osprey Watch Team have enthusiastically continued to monitor the nest. The Osprey pair continues to incubate their clutch with a devotion characteristic to the species. The male has been doing an excellent job looking after his mate, taking over the incubation duties on regular basis, chasing off intruding birds (buzzards, crows and even the occasional osprey) and on most days bringing her not only one but two fish. 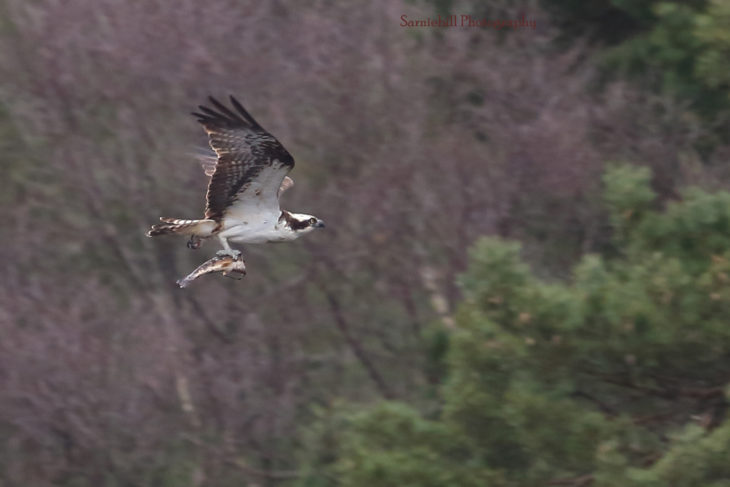 LM12 with a Brown trout on his way to the nest. © Nigel Wedge

As we mentioned previously the nights on the Loch may seem uneventful, however the opposite is true. The night is the time when many animals take an advantage of the seemingly quiet conditions and set out in a search of prey. These night time hunters are greatly equipped for life in the dark and unlike humans have no problem making their way round the shores of the Loch in the pitch black. It can be difficult to get a glimpse of  them as they tend to see and hear us, as we stumble through the undergrowth, and make a swift escape, before we even realise they were there.

Here on the reserve  we are really lucky, as our night cameras give us the same advantage of seeing without being seen. The following videos are just a few wee examples of some wildlife on their night time missions.

Recently, we had more sightings of the tawny owl in front of the Visitor Centre and the footage below is an excellent example of some characteristic behaviour. The opposite side of the Loch has been even busier and last week we got a glimpse of a Pine marten in a hurry on his night mission. Last but not least, a Fox made an appearance near the Beaver lodge a few days ago and we managed to get some great footage for you to enjoy.

We still have quite a few night watches ahead of us and are hoping to capture more exciting footage to share with you.

Keep your eyes on our blog for the Osprey update and more wildlife stories and videos.

Did you know? Foxes are extremely vocal animals and according to MacDonald and Reynolds (2005) there has been 28 different vocalisations recognised within the species repertoire. Furthermore, it is possible to recognise individuals based on their voice and vocalisation.

With about two weeks to go until the hatching, as estimated by one of our SPOs, the Osprey Watch Team have enthusiastically continued to monitor the nest. The Osprey pair …