We are seeing a whole variety of species on the loch during the past couple of weeks. We’re finding an increasing number of goldeneye and tufted ducks, who will overwinter on the loch, along with our resident mute swans.

The visitors this week have been getting great views of the female long tailed ducks, who have been diving right in front of the double decker hide.

We have had a lot of fun watching two young great crested grebes, along with a few adults. A volunteer also spotted another grebe on the far side of the loch, which we suspect is a Slavonian or other type of grebe. We are hoping it will swim closer to the hides at some point, so we can get a better look at it.

Uncommonly on the loch, we have seen two shovelers, with the males’ unmistakable green heads and broad bills. They also have a peculiar call, producing a harsh knocking sound when flushed.

A number of siskins have been spotted by the alder trees near the hides, preferring the natural berries, as opposed to the seeds in the feeders. Many of these birds are residents, and we can get some migrating from Europe for the winter. Keep an eye on the alders, conifers and birch if you want to see them.

At the feeders, we are stilling seeing a lot of woodpeckers and squirrels. A young squirrel has been seen gorging itself on peanuts, whilst sitting on different tree branches, posing for visitors. There is more natural food around for the squirrels at the moment, but they are still visiting the feeders regularly. 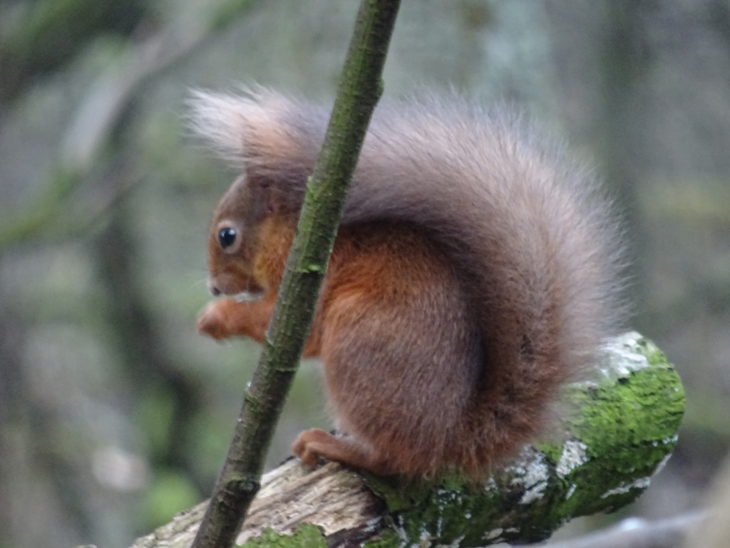 Squirrel at loch of the lowes feeding station

A sparrowhawk is making the occasional attempt for a meal by flying through the feeding station, to no avail (as far as we know). This may be due to the leaves falling, which provides a better view of a possible dinner for any predator flying over. The smaller birds often vanish from the feeders in a matter of seconds, which is probably them spotting a large silhouette of something flying across. In this case, it’s probably better for them to be safe rather than sorry they didn’t hide.   A number of woodpeckers are frequent visitors to the feeding station, along with an increasing number of pheasants.  If you hear a knocking noise in the visitor centre, it is almost certainly a blue tit hammering away in a bat box just outside the window behind the main desk, which is fairly irritating. From what I have read the bird are prospecting early for a nest site.

Groups of long tailed tits and bullfinches have been seen at the car park, so it’s always worth having a look around when you first arrive. You may also spot some fallow deer, and even red squirrels, over the fence on the left as you walk down to the visitor centre.

We still have spaces avaliable for our stargazing event on Sunday for anyone that is intrested. Book online or call the visitors centre on 01350 727 337. 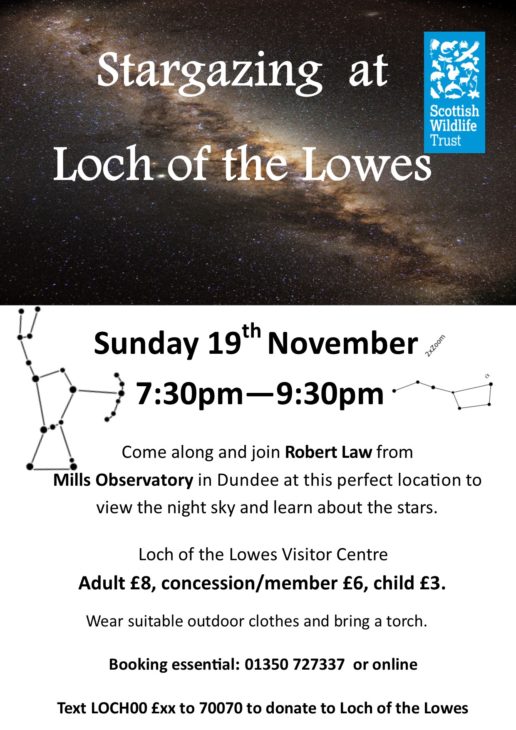 We are seeing a whole variety of species on the loch during the past couple of weeks. We’re finding an increasing number of goldeneye and tufted ducks, who will overwinter …