As we find in nature, there are always trade-offs: evergreens which retain their leaves are maximising the photosynthetic period allowing them to grow more over the year. Deciduous trees lose this opportunity but avoid the risk of losing water and frost damage through the changing season.

Beech trees, along with other species such as oak, retain dead leaves through winter: this is referred to as marcescence. marcescence is also seen commonly in juvenile trees but there is no clear reason. One hypothesis is that the dead leaves are unpalatable for herbivores and the dead leaves act as a deterent to protect the young buds of the new leaves from being munched off.

Another interesting theory is that the leaves are held as a nutrient store and fall off during spring as the tree begins to grow again and in need of rich soil. This would give trees in poor soil conditions a helping hand once the winter has passed however this really depends on the speed at which the leaves can decompose in the soil. These small amounts of nutrients could provide a competitive advantage for a young beech racing to the top of the canopy.

It has also been suggested that the leaves act to hold snow up until spring melts, providing more moisture for the soil than would be avaliable without the leaves. This is a large trade off as the tree is more likely to suffer frost damage and breakages in the coldest months. These are just a few theories suggested and marcescence could be a function of all or a combination of all of them.

Now, lets have a think: how would you go about identifying a beech tree if it has lost its leaves? Here is a quick guide with some examples to help you and build your tree identification skills.

As many of you will likely guess, bark is an easy place to start. Each species of tree has its own particular form and texture of bark. However, this can be challenging as it is effected by the age of the tree and some enviromental conditions.

Beech tree bark starts out as a silvery-grey colour and smooth which develop fissures.

Tree buds are also instrumental in identifying species of tree as the shape, colour and position. Buds will be smaller in size over winter, waiting to grow spring leaves. They are also incredibly interesting to learn about.

Even at this time of year you can see the young slender and pointed buds on the branches with many  scales. If the tree manages to hang on to the orange leaves of autumn they will continue to darken but they can be taken off by strong winds.

Pedunculate oaks are a common native tree around Scotland and on the reserve. They are large trees with adults reaching around 40 metres. Oak trees have very rough bark with deep fissures.

The buds of pedunculate oaks are concentrated on the tip of the branch. They are light brown colour and have a number of scales.

Sessile oak is also a common oak in the UK and is very similar however the buds tend to spread more sparingly along the stem. The sessile twigs also tend to be slimmer, slightly more grey or purplish and more knobbly. The buds are also more brown than the pedunculate oaks (I had trouble figuring these two out!).

Oak trees are famed for their strong timber and its bark which was used for tanning leather. They support a huge variety of animal species giving insects and birds a home and feeding large mammals like deer and badgers with their acorns.

You can also find beautiful silver birch trees at Lowes which are thankfully a little easier to identify. Silver birch, as the name suggests, have light silvery colouration to their bark which is almost pink in its adolescence . In juvenile trees the bark will appear uniform and almost paper like. As the tree ages the silver bark is broken up by deep fissures creating rectangular shapes. In uncrowded surrondings the birch trees also have a tendancy to weep.

The branches of silver birch trees also grow in an obvious upward angle and new shoots will have a have dark coloured bark.

Birch trees are lacking in strength in their timber, however it has been used for various tools and as a veneer. The wood also burns fiercley so it is useful for starting fires. Silver birch is a ‘pioneer’ species meaning they are one of the first species able to populate suitable ground. 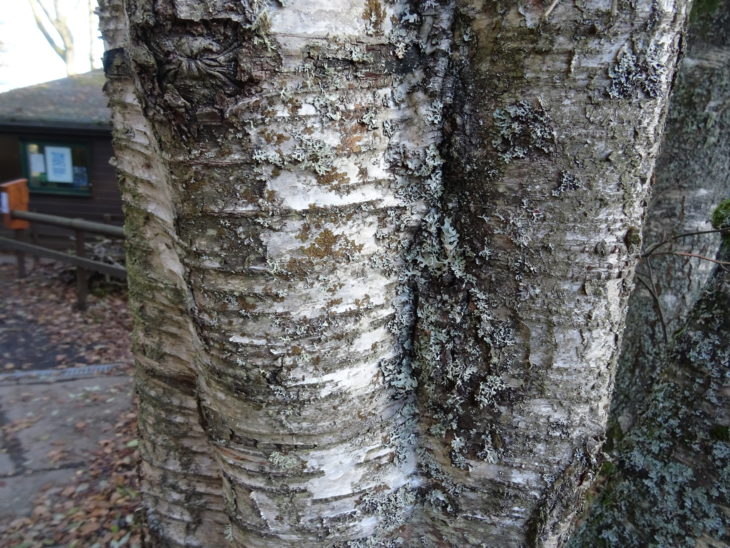 Elder are relativley small shrubs that can grow into medium sized trees which bark has deep grooves and is greyish/brown in colour. As you can see in the picture it tends to sprout and grow in any way it chooses, often twisting. The species is wide spread around the UK and often treated as a weed in some parts. Its white flowers and fruits are edible and enjoyed by a number of nectar feeding insects.

Next time you are walking down to the visitor centre or along our woodland path you should be able to identify the trees you see. If you are really keen you can always head down to the Fall of Clyde wildlife reserve and check out their new tree ID self-guided trail. Along the path you can find information plaques with descriptions of the trees in winter and some interesting facts!

On the loch we are seeing increasing numbers of wigeon whistling away. Greylags and canada geese continue to pay us visits along with whooper swans. At the feeders we have had a few sightings of bramblings hiding amongst the chaffinches. We have also had a few visits from the yellowhammers who seemed to have forgotten about us since summer ended.
Join us next weekend for our winter solstice fun days where we will be learning all about the effects this has on our environment and the animals that live here! 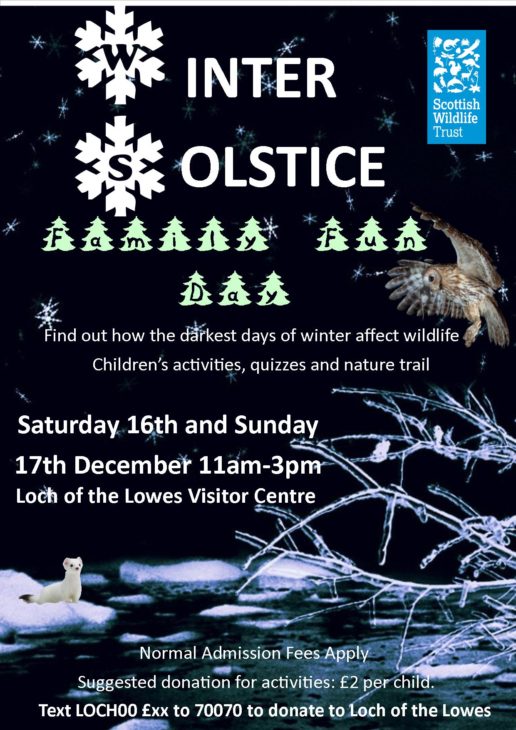 As we find in nature, there are always trade-offs: evergreens which retain their leaves are maximising the photosynthetic period allowing them to grow more over the year. Deciduous trees lose …

How protecting and restoring nature can help to tackle climate change