As we wander slowly into autumn, we all experience the familiar changes of season: the leaves on the trees are turning; foliage is beginning to wither. It’s the time of year when hedgerows are filling up with berries, and tree nuts and seeds are ripening. Wildlife is also very sensitive to the shortening days with cooler night and day temperatures and its responses make for great watching!

It’s a big time for the deer as they begin their mating season! Be sure to listen out for the bellow of dominant males if you are travelling through their territories. The two native Scottish species are red deer – Cervus elaphus, and roe deer – Capreolus capreolus, the largest being the red deer.

Red deer males will be partaking in various dominance displays to secure their harem, including posturing, vocalisations, parallel walking, and in some cases, fighting. Their breeding season runs into November. Meanwhile, roe deer, which are often seen on and around the reserve, breed earlier, in August and September. This is a possible adaption to avoid run-ins with the much larger red deer, with whom they have naturally evolved. Roe deer females delay the fertilised eggs from further development so their young are born in May and June.

Fallow deer are also entering their rutting season. In terms of size, fallow deer are between red deer and roe deer. Their coats come in a variety of colours – brown, black, white, with spots sometimes visible. We have had a lot of recent sightings of groups of females (does), including some young with very dark coats. Deer are usually more active during dawn and dusk, so be especially vigilant on the roads as the days shorten.

Another key sign that autumn is in full swing is the fact that red squirrels are spending more time on the ground. As winter approaches, red squirrels will begin caching pine cones, acorns and seeds, in a number of holes in the ground. They then cover the holes back over with soil and moss for safe keeping. If winter food stocks are low they will return to their hidden hoards, to aid them in surviving the harsh winter months.

Beavers will also start storing food for the cold season, but they create food stores outside their lodges. They will anchor large branches deep into the mud and create a food cache. If needed they may still be felling trees later in the year. However, in winter, the trees provide less nutrition for the beavers as growth is dormant in the winter.

By October, we will likely have seen the last of the swallows and swifts for the year. House martins will also head back to their over-wintering sites in Africa.
This time of year too, we have many birds arriving from the continent, for onward passage or overwintering. You are likely to see brambling and redpoll at our feeders. A number of our resident bird populations will increase as their cousins, such as chaffinches, blackbirds and robins, arrive from Scandinavia and Finland. Fieldfare and redwing will also be arriving on our fields, so keep an eye out. 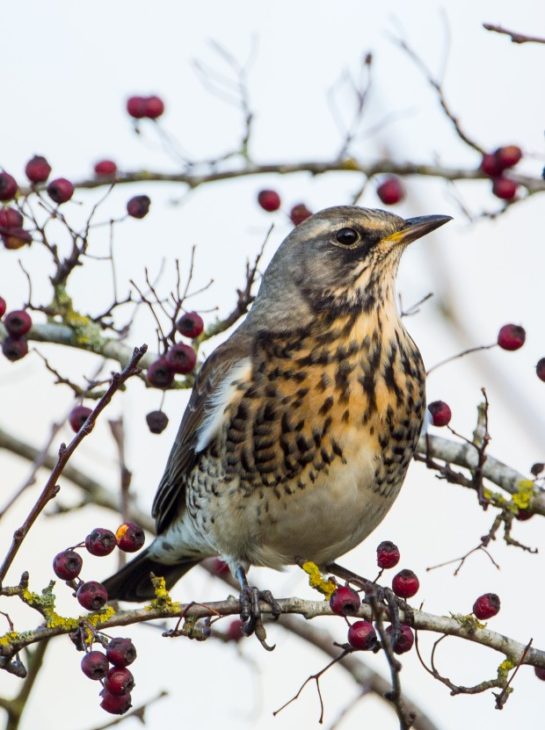 On the loch, we should see a whole host of waterfowl hunkering down. It’s the best time to see pochard in the UK, as they travel to flee the cold in Europe and Russia. Wigeon will also be in attendance, as they overwinter in Scotland and some parts of England. Although a small number of goldeneye are resident in Scotland, the population dramatically increases during this time of year, so we should see some here.

We have heard that pink footed geese have already arrived in Scotland this year, and we expect to see some on the loch in the coming month. Greylag geese and whooper swans are common sights at Lowes, as we enter autumn. This is also the time of year when you may find some unfamiliar birds which have been blown off course as they attempted their migration. So you never know what you might see whilst you are here.

As we wander slowly into autumn, we all experience the familiar changes of season: the leaves on the trees are turning; foliage is beginning to wither. It’s the time of …