If you have visited Loch of Lowes you may have spotted one or two of our yellowhammers from our woodland window. The Old Scots name for yellowhammer is “Yellow Yorlin“, although you don’t hear that used so much these days. These sparrow size passerine birds are often seen standing on the feeders, enjoying our mixed seed. You can identify the male by the striking canary yellow colouration found on the head and underside. To the untrained eye the females can be confused with reed bunting females, as they have more brown striations (stripes) on the crown, and less of the famed yellow, particularly in their 1st winter. The wing coloration is also very similar. 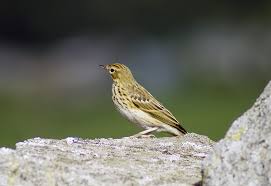 Yellowhammers are farmland feeders, preferring to nest in hedgerows and feeding on seeds throughout the year. They also rely on the diversity of plants found in the hedgerows and will supplement their diet during the breeding season with insects (April-September). Those of you with keen ears will know their familiar high pitched ‘little bit of bread and no cheese’ song which they sing from the tops of trees and fence posts. The composer, Beethoven often drew inspiration from nature, often going for walks and composing while he wandered. Scholars of Beethoven believe that the song of the yellowhammer inspired musical themes in a number of his works. The bird also inspired the naturalist poet, John Clare, to write the poem “The Yellowhammers Nest“. 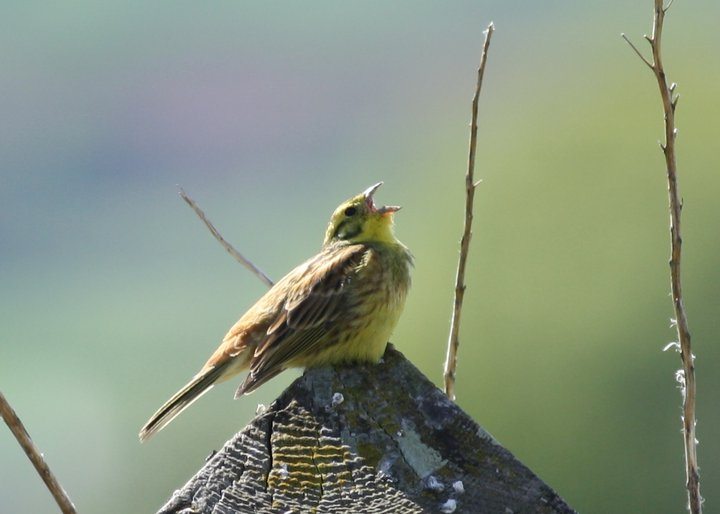 Unfortunately in the UK the species population has decreased by 50% since the 1980’s. There are multiple reasons for this unfortunate decline: in Wales a study found that changes from arable farming to livestock rearing meant there was a loss of food for the yellowhammers and other seed feeders. Improved farming techniques and reduction in winter stubble means there is less food available throughout the year. The loss of many hedgerows and edge habitats in rural areas means a reduction in nesting habitat and food supply for the yellowhammers. In Northern Ireland (NI) the population has decreased by 65% since 1991 with an estimated 5000 pairs left which is why the species has been red listed in both NI and the UK. However, it is not all doom gloom as the yellowhammer population appears to be stable in Scotland.

Efforts to conserve the species by the RSPB and the Game and Wildlife Conservation Trust, have focused on providing information and advice to farmland owners around the UK. Landowners are encouraged to maintain current hedgerows, thus providing nesting sites and food sources. It is important to wait until the end of September to trim hedgerows to give the late nests a chance to fledge the last chicks of the season. This is important for overall productivity as these nests tend to be more successful. Ensuring hedgerows and edgings are cut on rotation instead of all at once will also help to avoid habitat loss. Coppicing areas helps encourage a dense and diverse habitat for the yellowhammers and other woodland birds. Ensuring food for the winter period is also an important step to aid their survival.

So, if you know a lively group of yellowhammers, pay attention to their nesting sites and the food in the area that is available to them. You may also notice them coming into more urban areas in search of food and so please keep an eye out and elevate your bird feeders to save them from a run in with our feline friends. Hopefully, with a little bit of effort we can see a recovery in the population and we can all enjoy a little bit of bread and no cheese.

If you have visited Loch of Lowes you may have spotted one or two of our yellowhammers from our woodland window. The Old Scots name for yellowhammer is “Yellow Yorlin“, although …

Birds, Loch of the Lowes