The last couple of weeks we have done some seed collecting. It is time consuming but quite important for our tree nursery. The trees that we sow in the tree nursery are native plants. When you walk around the park you will notice a lot of Douglas firs. They are not native to Scotland. They came from America somehow. Therefore, we try to cut down the non-native trees and plant some that are local. It will not only give us local trees but also a better biodiversity. That is why our tree nursery is so important and that is why I have been collecting seeds this week.

The seeds that I have been working with are;

The seeds are very different in size depending on the berry. Therefore I needed to find different technics to get them out.

First time I worked with the hawthorn berries they were not exactly ripe. That is only last week. I separated them from their stems and put them into a bucket. Next I poured a little bit of water in it. Not covering the berries entirely, almost just to cover the bottom of the bucket. Then I took a heavy and wide stick and started punching the berries, to get off as much flesh as possible before I had to get my fingers and nails in it. I started scrapping the flesh off with my nails, but found it easier to do it with a knife. It is like peeling potatoes just very small ones. And it takes time. However, I found it very calming and meditative, but that might just be me. I did the same when they were riper this week, but they are messier.

I was struggling more with the Rowan. They have about 4 very small seeds inside them and they are a nightmare to get out. If I was going to sow a Rowan at home I would just burry a couple of berries in a pot and hope some of them will give me a tree eventually. However, there might be a big chance of a result if the seeds are clean. First I mashed the berries. Then I took a colander and poured a small bucket of water on top of the berries. Then I crossed my fingers that the small seeds would get into a bucket I put underneath the colander. However, when pouring the water with potential seeds through a sieve, I didn’t get a lot of seeds out of it and it would take forever. Therefore we ended up deciding, that we would smash them up real good and then dry them out. You can either do that with leaving them on a dishtowel or using a dehydrator, which we did. Then you can take a little pinch of seeds and dried out flesh, and hopefully someday get a small tree out of it. 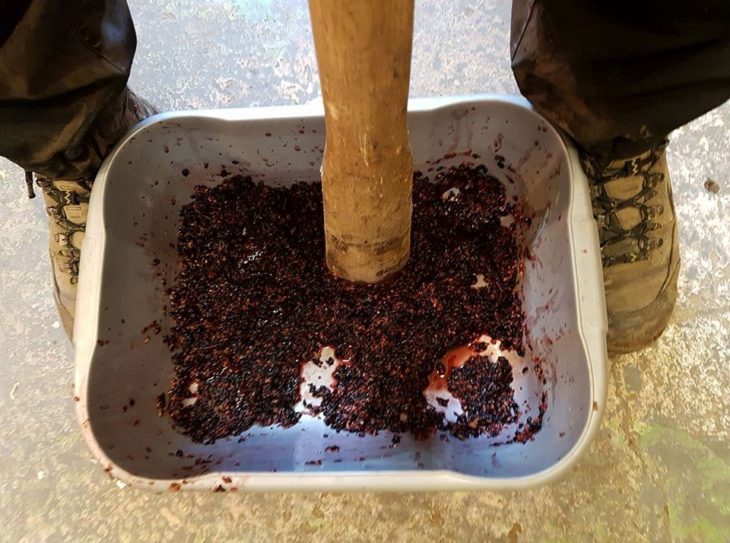 The Elderberries were easier. I basically did the same as what I had done with the Rowan but the flesh was much easier to separate from the seeds. The seeds are small too, but somehow much easier to work with. It didn’t take me long to start to see the pile of seeds the berries contained and in the end I had mainly seeds and skin left. We dried them up as we did with the Rowan berries and they are ready to go into the ground.

So in a couple of years you will be able to see some small trees in our tree nursery at Mid Lodge.

The last couple of weeks we have done some seed collecting. It is time consuming but quite important for our tree nursery. The trees that we sow in the tree …