Writing about magical animals can lead to a lot of research into real animals.

I’ve often written about imaginary animals – dragons, phoenixes, centaurs, selkies – which gave me the freedom to make up physical attributes and unusual behaviours.

But recently I’ve been writing a trilogy in which many of characters shapeshift into real Scottish animals.

In the Spellchasers trilogy, my main character Molly is cursed to become a hare at inconvenient times, my main baddie Corbie often flies off as a crow, and there’s a character who’s trapped as a toad for the whole of the first book.

I decided that even though these creatures were clearly magical, I wanted them to act, move and have the same physical powers as real wild animals.

So I did a fair amount of research before I started writing. Initially I researched the folklore of these animals. But I also researched scientific facts about the real wild animals, particularly the speed and movement of hares. (My hare gets chased a lot, so I needed to know how she would react to danger, and how fast she could go.)

But I clearly didn’t do enough research. Because when I was tidying the final draft of the first book of the trilogy, I made a list of things to double-check – would a hare beat a racehorse, how big is a crow’s egg, how wide is a hare’s field of vision, how do toads move? – and realised I’d made a few simple (and simply wrong!) assumptions.

For example, hares have almost 360 degree vision, with narrow blind spots at the front and back. Discovering that at the last minute meant redrafting quite a few chase scenes, because my heroine was now very hard to sneak up on!

And toad don’t hop, toads crawl. Which took me by surprise. And meant a change of verb and often a change of layout in almost every scene.

So I really enjoyed writing about real animals, but I also found it much fiddlier and more rigorous than writing about imaginary ones. (With dragons, no one can say you got the science wrong!)

However, I hope that by giving our native wildlife starring roles in my magical adventures, I will inspire young readers to find out about the animals living around us, and inspire young writers to create stories of their own about our fascinating Scottish wildlife.
Lari Don’s most recent novel Spellchasers: the Beginner’s Guide to Curses is out now, published by Floris Books. http://www.discoverkelpies.co.uk/books/fantasy/beginners-guide-to-curses-2
More info about Lari’s books can be found on www.laridon.co.uk and Lari can often be found on twitter @LariDonWriter

Lari will be at Loch of Lowes visitor centre on Sunday 23rd October from 3.30– 4.30pm, chatting about the Spellchasers trilogy and about being inspired by Scottish wildlife. 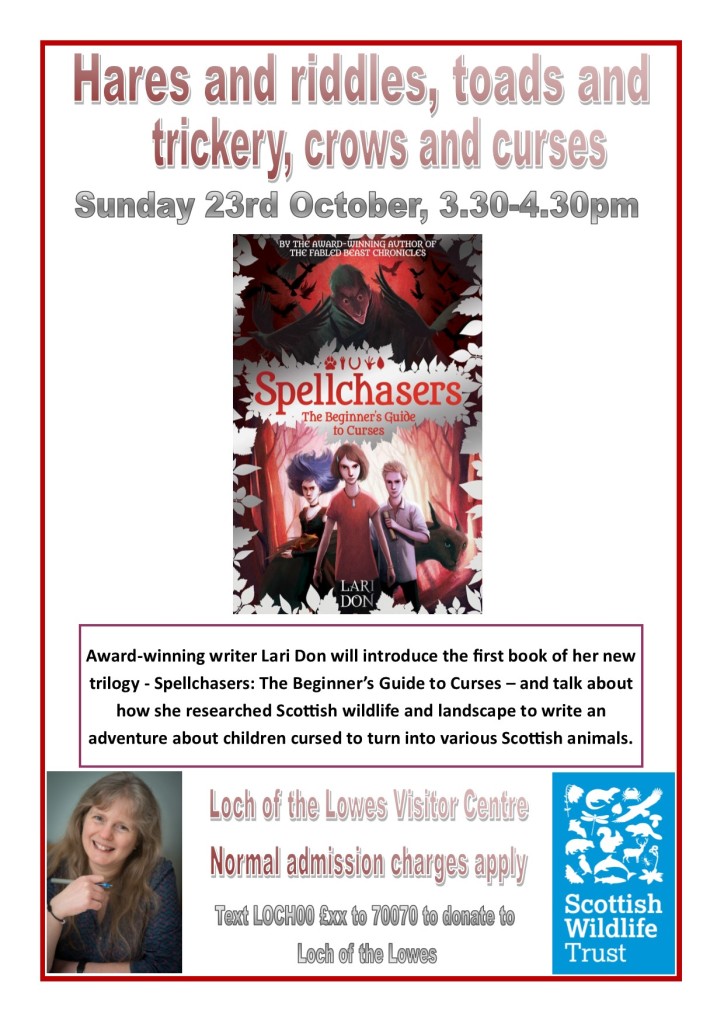 More details of the event which is suitable for 8 – 12 year olds can be found at  https://www.skiddle.com/whats-on/Perth/Scottish-Wildlife-Trust-Loch-Of-The-Lowes-Reserve/Hares-and-riddles-toads-and-trickery-crows-and-curses/12825493/

Writing about magical animals can lead to a lot of research into real animals. I’ve often written about imaginary animals – dragons, phoenixes, centaurs, selkies – which gave me the …

Diary 2016, Events and activities, Loch of the Lowes