Tuesday dawned bright and sunny, with little to no wind – the perfect day to ring our two rapidly growing chicks.

Keith Brockie, a local licensed and highly experienced raptor ringer once again did the honours, scaling the tree and successfully ringing the two chicks in situ, in order to minimise the time the chicks were without their parents on the nest. Keith knows the site well, having installed the original foundation of the nest some 32 years ago. The calm, warm climbing weather and Keith’s experience meant the process took a mere 20 minutes to complete.

The chicks, hearing their parents’ alarm call as the ringing team approached, instinctively played dead, by ‘pancaking’ flat on the nest, making them easy to handle. The adults were closely monitored by the Species Protection Team from the hide, where they observed both NC0 and LM12 circling the nest overhead, keeping a watchful eye on their chicks whilst they were ringed, weighed, had their wing measurements taken. The sex of each osprey youngster was determined by the thickness of their leg bones, with females typically having thicker legs than their male counterparts.

Once Keith had left the nest, NC0 did a thorough check of the area, swooping low over the loch and surrounding woodland before returning to the nest, closely followed by LM12 with a fish. The family quickly settled down to enjoy the sunny day as if nothing had ever happened. The team at Lowes could not have asked for it to go better!

What does ringing involve?

Only specially trained and licensed experts are involved in ringing, since the procedure requires substantial skill, a steady hand and a calm disposition.

Ospreys receive two rings, a small, metal lightweight ring with a unique BTO (British Trust for Ornithology) number on it and a larger, plastic ‘Darvic’ or colour ring, comprising of a combination of 2 or 3 letters and digits. Rings come in a variety of sizes, with each species having a set size appropriate to the thickness of their leg. Special pliers are used to tighten the ring around the lower leg of the bird which prevent over-tightening.

In Scottish ospreys, the ‘Darvic’ colour ring is placed around the left leg, with the smaller metal BTO ring placed on the right leg. Ospreys from nests in England and Wales wear their colour rings on their right leg and metal BTO ring on their left, helping to identify the country of origin within Great Britain.

Why is it important to ring ospreys?

Ringing enables ornithologists and conservationists alike to build up a picture of the movement, survival and breeding success of birds. In times of increasing threats and challenges to the natural world, including worrying downward trends in species diversity and density, this data can help us understand influences and impacts such as climate change, habitat loss and human influence on bird population numbers.

As large, migratory birds that are relatively easy to spot, the data collected from sighting ospreys enables us to learn key factors about their life such as when and where they migrate, when and where they breed, how long they live and crucially any changes to these trends and patterns. Ringing birds also allows us to identify specific individuals who may be particularly long lived, who in turn provide valuable long-term monitoring data.

With more amateur birdwatchers and photography enthusiasts using powerful telescopes and camera lenses, there is a greater chance of sightings of ospreys’ Darvic colour rings being positively identified and reported. This is particularly useful when young birds return to the UK for the first time, prospecting new territories or breeding for the first time.

Examples specific to Loch of the Lowes include Blue PH1, a Lowes male who made a flying visit to his natal site in 2019 and Blue PT0, a 2018 female sighted returning to the UK for the first time as a two-year old to Poole Harbour. Further intrusions by ringed birds at Lowes this year include Blue KX6, a four-year-old female ringed near Tain in Ross-shire and Blue KN8, a five year old female from nearby Loch Tay. 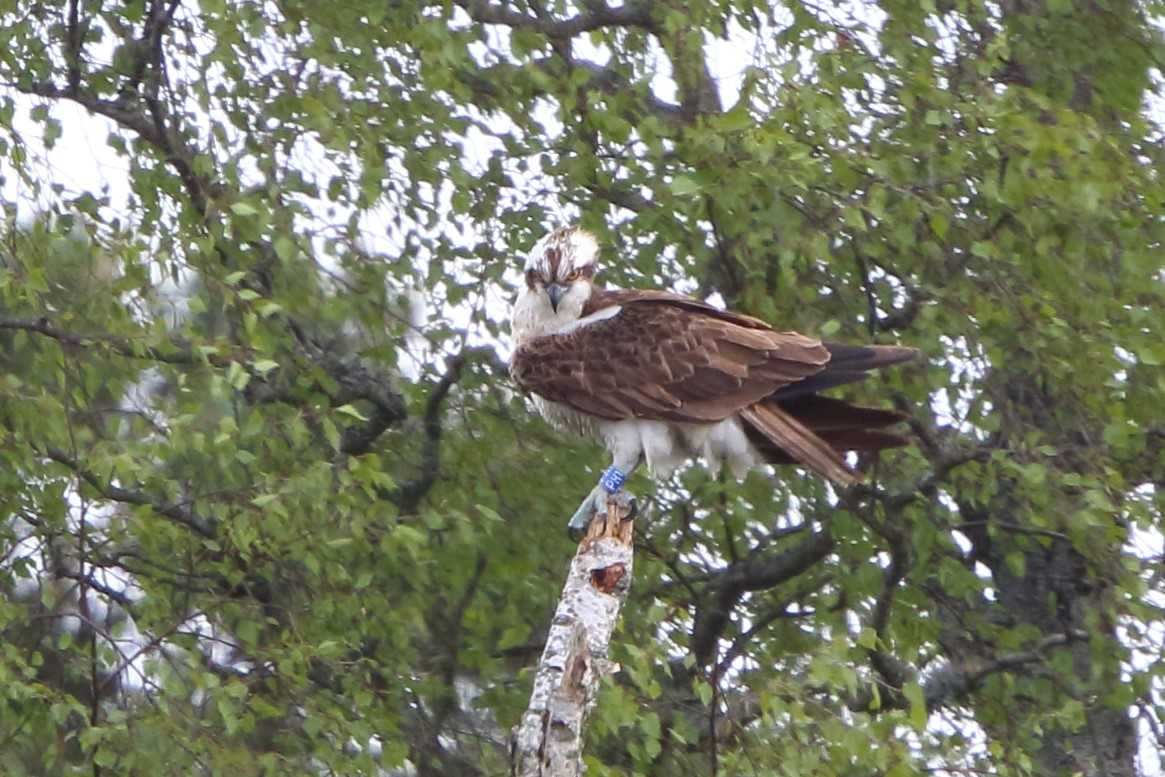 What should you do if you see a ringed osprey?

If you spot a colour ringed osprey, please contact Roy Dennis providing as many details as possible, preferably including a photograph for a positive ID.

If you happen to find any dead ringed bird, the smaller metal BTO ring also provides a British address where finders can send details to the national bird ringing scheme.

Over the next few weeks you can expect to see lots more wing stretching, wing flapping and eventually ‘helicoptering’, as our intrepid young ospreys get to grips with their rapidly growing wings and continue to build up the muscles required for flying. Ospreys typically fledge at around 51-56 days, so keep following our webcam for their next exciting stage in their development.

The Osprey Protection Programme at Loch of the Lowes Wildlife Reserve is supported by players of People’s Postcode Lottery.

Tuesday dawned bright and sunny, with little to no wind – the perfect day to ring our two rapidly growing chicks. Keith Brockie, a local licensed and highly experienced raptor …

Loch of the Lowes, Ospreys, ringing