If you follow Loch of the Lowes’ social media and live osprey webcam, you may notice that our nesting ospreys NC0 and LM12 have to deal with regular nest intrusions from other ospreys. But why do ospreys intrude occupied nests? What do they want? As part of our intruders series, this blog will delve into the reasons behind osprey intrusions and highlight some of the key offenders of the season so far. 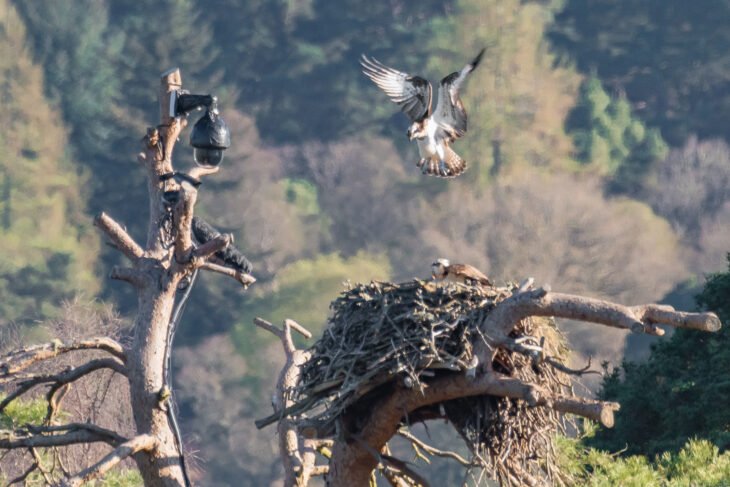 Why do ospreys intrude on occupied nests?

Intrusions may be as low key as an osprey flying too close to the nest, causing NC0 and LM12 to look to the sky, guard call (a series of high-pitched chips) and mantle (a defensive behaviour whereby ospreys hunch their shoulders and wings to protect the nest and make themselves seem bigger). Other times, intruding ospreys will fly, talons out, directly onto the nest and attempt to oust our resident pair.

The main reason ospreys may intrude during breeding season is to try and stake a claim on the nest. Intruding ospreys are often young or non-breeding birds who have either yet to settle on a nest site, or lost one to storm damage – after all, why waste energy building a new nest when there is one ready and waiting? It is for this reason that human-made nest platforms have been so successful. Intruding ospreys are primarily after a good nest, rather than a mate. Even if they have yet to find a mate, unpaired ospreys will defend desirable nest sites from intruders.

Intruders can be highly persistent and aggressive, diving and bombarding the nest and even causing injury, or crushing the eggs. However, while ospreys are semi-colonial breeders (they tend to nest near other ospreys), they are highly territorial about their nest sites. In some parts of the world where there is a higher population of ospreys, breeding pairs will nest much closer together, but in Scotland they tend to nest a few kilometres apart, defending the area around the nest as well as the platform itself.

NC0 and LM12 defend the nest and surrounding area as an efficient team, something that they have refined since first pairing in 2020. As is the case with most breeding pairs, the female (NC0) will remain on or close to the nest in the event of an intrusion in order to protect the eggs, while the male (LM12) will chase the intruder out of their territory. Watch their coordinated effort to defend the nest from an unringed female intruder, who we have identified as a repeat offender.

LM12 chases away the intruder, while NC0 quickly returns to the nest to cover the eggs.

Key offenders of the 2022 osprey season so far

Since the start of Osprey Watch at Loch of the Lowes, we have been able to identify several noteworthy intruders. The first of these is an unringed osprey who has been an especially persistent intruder on the nest. She is likely female, due to her dark breast-band, large size, and underwing markings. She has a distinctively shaped brown marking on the back of her head, so we know that she is a regular intruder, both this season and last year at a similar time.

On the day NC0 laid her third egg, this unringed female intruded the nest three times, both before and after NC0 laid. Below you can watch it as it happened. Will this bird continue to test NC0 and LM12’s teamwork over the 2022 season? You can watch our live osprey nest webcam here to find out.

We are always excited when a ringed osprey is sighted. Ospreys are usually ringed as fledglings with a metal ring supplied by the British Trust for Ornithology and a larger ‘Darvic’ colour ring, which shows a unique combination of two or three digits and is easier to read from a distance with binoculars or a camera. Colour rings are placed on the left leg of Scottish-born ospreys, and the right leg of English and Welsh birds. Thanks to the Roy Dennis Foundation, to whom sightings of colour-ringed ospreys can be reported here, we have been able to track down two recent intruders.

On the 8th of April 2022, ringed osprey Blue/White V4 intruded the nest. Through the Roy Dennis Foundation and by chatting to the ringer Pete Davies, we were able to identify V4 as a male osprey, who hatched from a nest of three chicks that successfully fledged from Cumbria Wildlife Trust’s Foulshaw Moss reserve in 2015. After doing some further investigative work, we were able to find out that V4 has been nesting in the wider Dunkeld area since 2018, and has fledged a total of six chicks. However, his nest was unsuccessful last season and this year his mate failed to return, which may explain his interest in the webcam nest at Lowes!

Another ringed intruding osprey which has been sighted is Blue/White 124. This osprey was identified as one of two chicks ringed by Brian Etheridge at a nest near Dingwall on 10th July 2019. (Brian also ringed our current female NC0). This bird was seen at Figuera da Foz in Portugal on 8th of February this year, but this is the first reported sighting of it in Scotland since fledging as far as we are aware. NC0 and LM12 have been adapting to some pretty hostile intrusions this season. In the video below, LM12 returns to back up NC0 after she has ousted 124 from the nest.

Lowes’ ospreys can be intruders too!

While we may like to think that the ospreys who have fledged from Loch of the Lowes can do no wrong, one Lowes osprey in particular has been causing havoc at Kielder Water & Forest Park in Northumberland. PT4 is a female who fledged from our nest in 2019. PT4 had already made a nuisance of herself on several nests at Kielder at the end of the season last year, and returned this season picking up where she left off, looking for a viable nesting site, or weaker pair to exploit.  She was recorded on several of Kielder’s nest webcams on Saturday 16th April, exploring nest availability and testing the strength of the already resident ospreys – she was quickly ousted, but who knows, perhaps she will find her niche next year? You can watch the videos here.

Over the nest few weeks, our Species Protection Officers will be publishing a series of blog posts on nest intruders. Stay tuned to read about what happens when Egyptian Geese and Corvids try to land on the nest.

With thanks to Kevin O’Keefe, Marion Moore and Kielder Water & Forest Park for the use of their images with permission.

If you follow Loch of the Lowes’ social media and live osprey webcam, you may notice that our nesting ospreys NC0 and LM12 have to deal with regular nest intrusions …

Osprey Diary at Loch of the Lowes – Week 17

Osprey Diary at Loch of the Lowes – Week 14