This week our new big project was trying to make our very own charcoal. It is a quite interesting process. The goal is to cook the wood that needs to be charred in a low oxygen environment. It will after some time remove the volatile compounds such as water, methane, hydrogen, and tar. 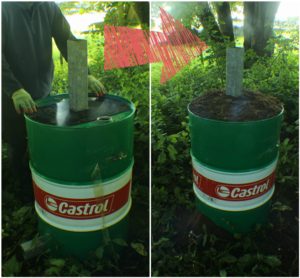 The construction and process

The construction was DIYed by our very own reserve manager, Stephen Blow and it was meant to be fuelling itself. He made the construction with an oil drum that was meant to contain the wood. In the top of the oil drum he made a lid so it would be easier to get the wood inside. Then he made a chimney like an L-shape. The chimney is meant to contain the actual fire, so fire is not actually meant to ever touch the charcoal in the process. The chimney is made so that smoke come out at the top and at the bottom is where the fire should be ignited. A very important piece he made is the gas tube. He made a small pipe come from inside the barrel back down into the chimney. This is meant to send the gasses that the wood is sending out back into the fire and thereby keep the fire going in some way. I am not so sure about how the science works but Stephen seems to know what he is doing. Another thing that is very important is to cover all holes and crevices so that no oxygen comes in or out to the oil drum. We just used the soil next to where we had put the oil drum to cover everything that seemed to get oxygen in or out. Unfortunately, we didn’t get to finish the charcoal this week but we are trying again next Tuesday – it is a long process. 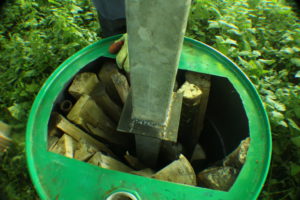 I think it is exciting to see if the charcoal is usable or not. I have a theory that hardwood is better than softwood since hardwood gives out more heat, where softwood is good at flaming for a while and then dies out eventually. Hardwood can keep the fire going longer. However, it is going to be interesting to see if it is the same when it has turned into charcoal or not. Then again, when ignited, the carbon in charcoal combines with oxygen and forms carbon dioxide, carbon monoxide, water, other gases, and significant quantities of energy. It packs more potential energy per ounce than raw wood. That might “kill” my theory, however, I believe some wood might be better than others. I guess experimenting with different woods would show us eventually which is better. For now, the Douglas Firs are the ones that our going to be charred.

I wrote some things about the Douglas Firs last week and why we are felling them so feel free to read that blog post too. Find it here: Seed Collecting

This week our new big project was trying to make our very own charcoal. It is a quite interesting process. The goal is to cook the wood that needs to …