This week we have seen the numbers of Pink-footed Geese climb to over 44,000.  The Rangers have estimated that the peak number could now have approached around 60,000 but without an official dawn count we can’t be sure of the exact number.

On that note, we have rescheduled our Pink Sunset event, as it was postponed due to poor weather conditions.  We are delighted to announce that it will now be on Saturday 18th October at 5pm.  Please call the Visitor Centre to book for further details. 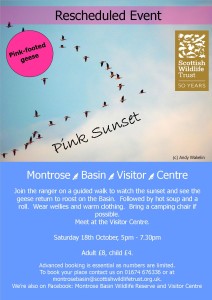 The Kingfisher continues to make its daily appearance in front of the Visitor Centre.

A Little Egret has been spotted on the salt pans this week, as well as a solitary Canada Goose, Teal and Grey Heron.

Our most exciting spot this week has been the Yellow-browed Warbler, a rare migrant from Siberia.  It’s a similar size to the Firecrest and moves quickly in the berry covered trees.  It was first spotted on Tuesday but has been seen throughout the week at other places around the Basin and in front of the Visitor Centre today.

Golden Plover have also been spotted on the Basin at low tide.  These were initially counted by a volunteer on Wednesday and numbered around 226.  Today the count increased to around 350 individuals.

It just goes to show, that even though the weather is getting colder, the Basin continues to support a vast number of species and individuals.

This week we have seen the numbers of Pink-footed Geese climb to over 44,000.  The Rangers have estimated that the peak number could now have approached around 60,000 but without …